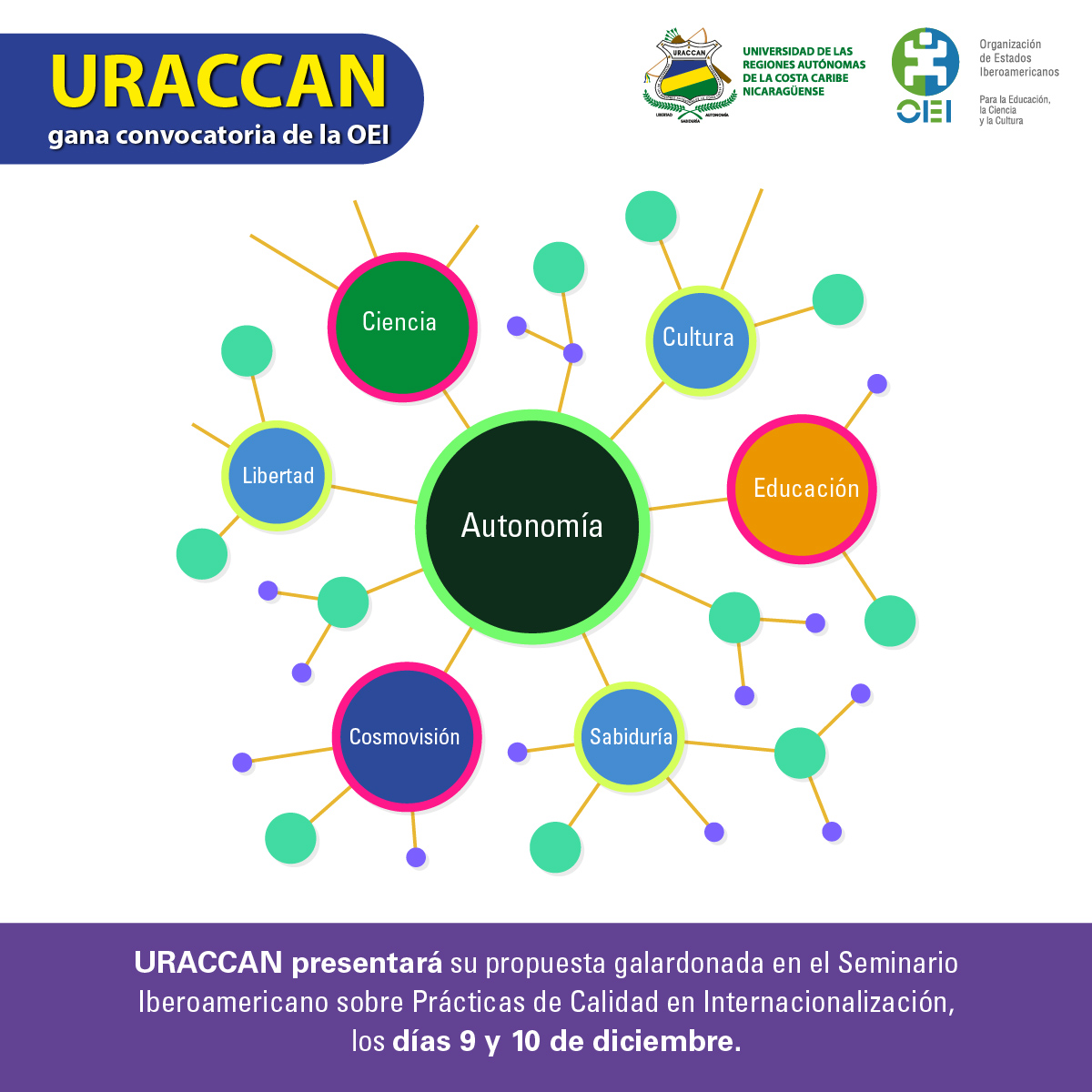 This recognition is part of the implementation of the international strategy Universidad Iberoamérica 2030.

The URACCAN project will be published in the Ibero-American Manual of Good Practices in Internationalization.

The Organization of Ibero-American States for Education, Science and Culture (OEI) has already announced to universities that won the call for Quality Practices in Internationalization. Among 59 universities in 14 countries, URACCAN was awarded in the category of "International Extension Programs and Initiatives and Development Cooperation Programs".

This call was made by the IEO, in conjunction with the International Institute for Higher Education in Latin America and the Caribbean (IESALC-UNESCO); Bucaramanga Autonomous University, Colombia; the University of Alcalá, in Spain; the National University of Cordoba, as host of CRES; and the Colombian Association of Universities. And it consisted of presenting quality practices in internationalization related to the Ibero-American field that higher education institutions have designed and implemented in the last 3 years, with the aim of promoting their visibility and transfer and promoting south-south exchange and cooperation.

The award was divided into 5 categories, one of which URACCAN obtained one of the best ratings. The experience shared by URACCAN and expected to be applicable in other university contexts was that of the "RUIICAY-OsloMet linkage in Intercultural Communication" programme, which in turn was selected to be presented at the "Seminar on Quality Practices in Internationalization", which will be held on 9 and 10 December.

Likewise, this URACCAN winning project will be published, together with the other ibero-American experiences awarded, soon in the Ibero-American Manual of Good Practices in Internationalization.

What is the experience shared by URACCAN about?

According to URACCAN Secretary General PhD. José Luis Saballos, the RUIICAY-OsloMet Project for Linking in Intercultural Communication is a strategic alliance between the Metropolitan University of Oslo (Norway), the Autonomous Intercultural Indigenous University (Colombia) and the Amawtay Wasi Multiversity (Ecuador), which is sponsored by the Norwegian Agency for Development Cooperation (NORAD) through the Norwegian Programme for Capacity Building in Education and Research for Development (NORHED (english).

Dr. Velasquez explained that the focus of this internationalization project is the International Master's Degree in Intercultural Communication with Gender Approach, which "has as its basis the experience of media studies and the platform of south-south academic cooperation, towards the establishment of a comprehensive regional education and research program in intercultural communication. It articulates the perspectives and demands of institutional capacity building for intercultural communication education and research of the three Latin American universities that are members of the Network of Intercultural and Community Indigenous Universities of Abya Yala (RUIICAY)".

Through the program of this mastery , "the strengthening of ethnic and cultural identities was achieved, a new way of approaching knowledge of realities was promoted, valued cultural logics; it also meant, for many, a redefinition of their own identity. Diversity was positively valued as a key tool for the internationalization of learning," he explained.

Therefore, this master's degree represented a national and international space for interepismic dialogue between different peoples, allowing to systematize research experiences through the CCRISAC methodology (Culture and Breeding Wisdoms and Knowledge), "an innovation in the path of decolonization of thought and academia", said Dr. Saballos.

Both this call and the seminar in which URACCAN will participate in December, are part of the implementation of the international strategy Universidad Iberoamérica 2030, which hopes to "increase the international attractiveness of the university systems of the region and promote exchanges and cooperation between our universities, all from a determined institutional commitment to the elimination of obstacles to university mobility through a common Ibero-American metric" (IEO).