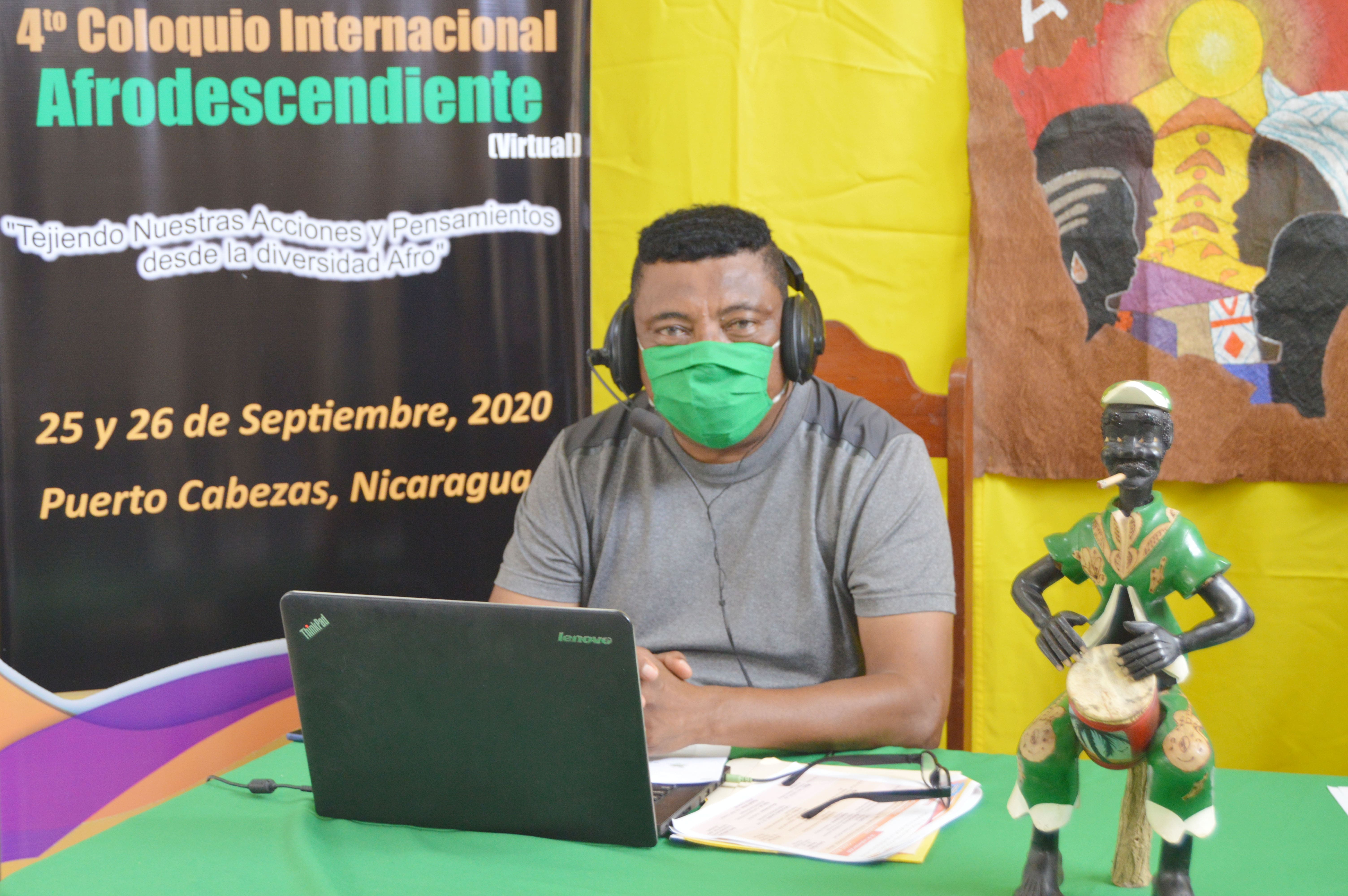 Dixie Lee, during his participation in the meaning and transcendence of the land and territory for the Afro people.

The Foundations of The Culture and Survival of Afro Peoples

Under the moderation of Kenly Velasquez, former president of the Pearl Lagoon Territorial Government (Nicaragua) and graduate of URACCAN, he started table 7, under the theme "Earth and territory, an Afro ancestral historical claim and right". With the participation of panellists Carlos Alberto González, director-founder of FUNECOROBLES (Colombia); Dixie Lee, co-president of AVOCENIC –IEPA/URACCAN (Nicaragua); Elizabeth Stokes, Rep. Women and Youth -AFROSA (Guatemala).

The land is the basis of the culture and survival of peoples. Without land there are no peoples. All the diversity and wealth of countries come from it. That is the reason for the struggle of the Afro peoples, for their ancestral rights.

Afro-Guatemalan activist Elizabeth Stokes noted that "We must insist on the agenda of the Decade for the recognition, justice and development of peoples, because only by recognizing ourselves and having a priority agent for our peoples will we be able to achieve the registration and recovery of our ancestral lands."

The earth is that vital resource on which life is governed on this planet and this has to do with the worldview of peoples, therefore, from that holistic and integral worldview, they see things in a connected way and The Afro-descendants have that connection with the earth, the panelists agreed.

Carlos Alberto González of Colombia assured that "The territory could be defined or framed in a trilogy and it is land, resources and human thought. Human feeling and that leads us to understand that each territory captures particularities, because it captures the feeling, the need, the will and the desire of the human being to relate and remain in it, because it becomes a fundamental part of his sentimental, spiritual life and his physical life."

Each territory is part of the peoples, it is what connects them between their roots, their ancestors, that delimits to want to have control over this and is what leads to the struggle for their territorial rights, from feeling, ancestrality, culture and spirituality, which transcends territory, that interacts and intertwines cultures that go many beyond borders.

Nicaragua is a multi-ethnic and multicultural country, with marked stories very differentiated, and is now recognized in the political constitution and many laws have been created for vindication, demarcation of Afro peoples, but invasion has been one of the main causes for Afro-descendant peoples to lose their ancestral territorial heritage and is a constant challenge for peoples.

"At times there is a silence around the history of Afro-descendant peoples and this has reached such an extent that many times everything that comes from African heritage is disguised as indigenous and we share our territory with the indigenous peoples, a bit so is the context in which we are marching here on the Caribbean Coast," Dixie Lee said on behalf of the IEPA/URACCAN.

The struggle for land and the defense of the territory is a prevailing reality in Latin America for the Afro people, which has to be visible and articulated among all.