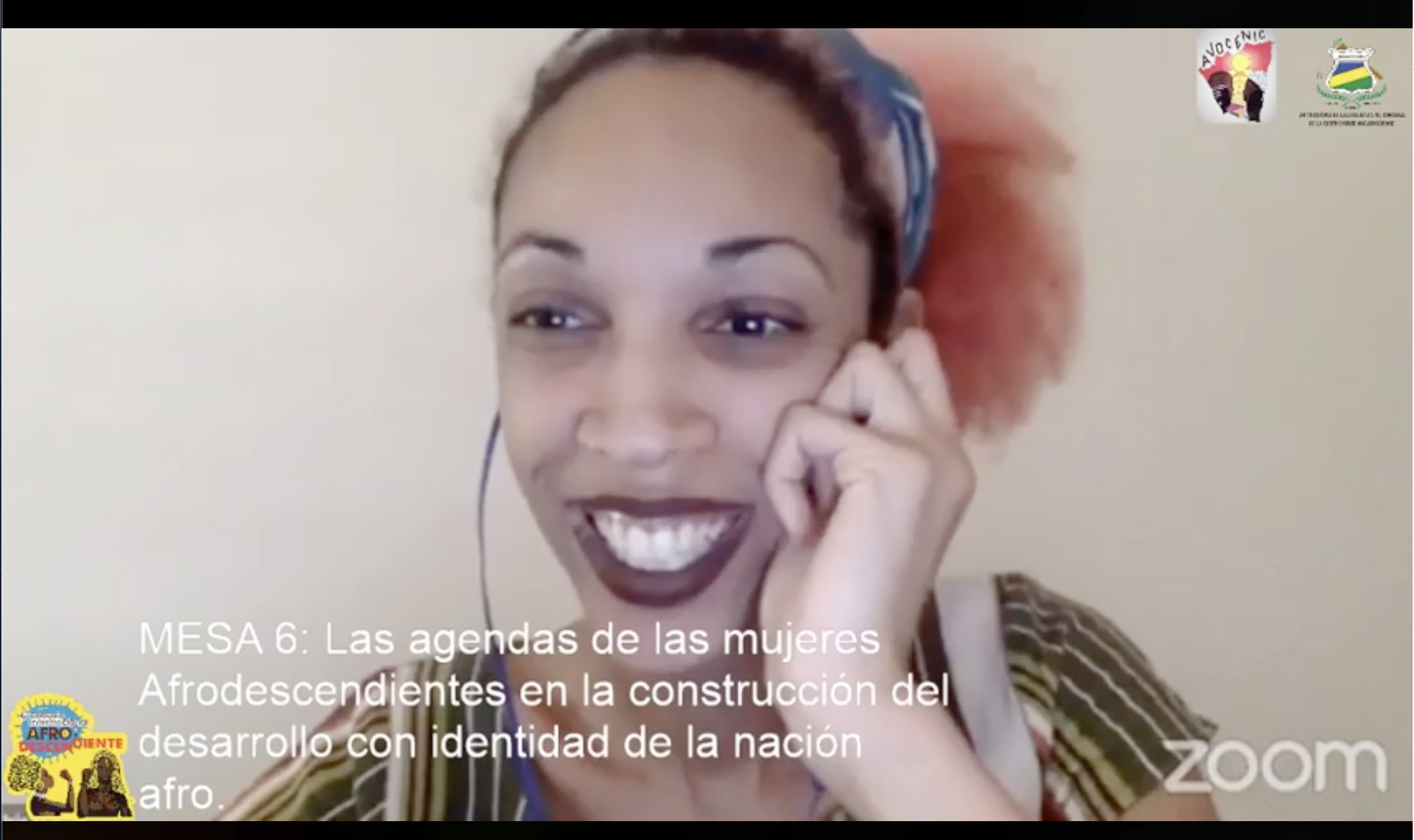 "Speak also of his joy and conquests," Isis Maria invited.

Dixon: "It brings us closer than the color of our skin."

Four exceptional women, originally from Nicaragua, Panama and Brazil, analyzed critically and optimistically, through Thematic Table 6, "The agendas of Afro-descendant women in the construction of development with the identity of the Afro Nation". The intelligent moderator of this activity, Shira Miguel Down, is defined as "proudly black and feminist".

The optimism and critical reflection of Panamanian women

The first participation was by Uenna Akenke Beste of Panama, who is a government expert on the OAS San Salvador Protocol. His words showed deep gratitude for URACCAN, where he did graduate studies. For her, URACCAN has become an undisputed international benchmark for the defense and promotion of Afro-descendant rights.

From an optimistic but highly critical attitude, Akenke emphasized in afro and diaspora women's networks across the continent and their articulated efforts to empower and achieve strategic spaces on the public side, to drive public policies from there that meet the needs and demands of Afro women.

In Panama, she shared the expert, the Afro-descendant woman has the highest level of education compared to the other social groups. However, it accrues the lowest wages and has the highest unemployment rates. To this day, Afro-Caribbean women have a hard time reaching decision-making spaces 10 times more. According to Akenke, it is necessary to implement public policies that take into account gender and ethnicity status, manifested through affirmative actions that ensure the full inclusion of Afro women at all levels.

National and international achievements of Afro-women: the voice of Dorotea Wilson

Continuing this line of thought, she joined the Dorotea Wilson panel of Puerto Cabezas, who is coordinator of the Afro-Latin American, Afro-Caribbean and Diaspora Women's Network (RMAAD), and who shared her experiences regarding the demands of Afro-African women's communities in their countries.

Wilson explained that, although the International Decade for Afro-descendants represents a very important achievement for this people, most Latin American countries have not subscribed to it, continuing with their centralized policies, with their bleaching system that mainly puts women in high disadvantage.

At this point, he listed, inviting national and international father-in-law to remain strong in the fight, including the regional consultations currently being held by the United Nations System on the Decade, as well as the recognition of PAHO from UNICEF, the Population Fund, Eclac and UN Women, as well as scholarship programmes. At this point, he called, information actions should be promoted that would allow all to work in unity.

In that sense, the MSc made its brilliant intervention. Bernardine Dixon, who is the director of the Center for Multi-Ethnic Women's Studies and Information (CEIMM), of URACCAN, and who coordinates the Secretariat of Women of the Central American Black Organization (ONECA), areas from which she works tirelessly in the construction of racism-free societies and other related intolerance.

The director of CEIMM emphasized the common past of the Afro people, paying homage to the ancestors and ancestors who were brought against their will to the Americas, but thanks to whom "new cultures and new identities were built. It brings us closer than the color of our skin," Dixon exhorted.

At that point, Teacher Dixon highlighted the resilience that characterizes Afro-women, who always demonstrate strength to face adverse situations, living in constant resistance for the search for new opportunities, without losing their hallmark and cultural identity.

"From the Secretariat of Women and from URACCAN we remain committed to continuing to work in partnership, day by day, in order to fulfill our dreams from the worldview and spirituality of our people," said Dixon, who is currently a PhD student in Intercultural Studies offered by URACCAN.

The optimism of the Brazilian woman: the smile of Isis Maria

From Brazil, this IV International Colloquium of Afro-descendants had the opportunity to learn about the experience of Afro-Brazilian women in the voice of Isis María, Coordinator of the Ella Preta Network, an organization that works with and for black women who do not have much opportunity for development with identity and who live in social marginalization.

"We need," Isis argued, "that women have more echoes in their voices." For this reason, one of the efforts of the Ella Preta Network, joins other black women's movements and works in areas of culture, communication and human rights from the perspective of Afro-women.

Isis, through his commendable testimony, motivated him to continue the struggle for the rights of the Afro Nation. The Ella Preta Network began as an face-to-face meeting of women with great aspirations and marked by stories of pain, and today involves 16 countries, campaigning in the fight over gender equity.

"Don't just talk about his sadness or his pains," Isis Maria exhorted. Also talk about their joy and their conquests, about all that makes them shine."