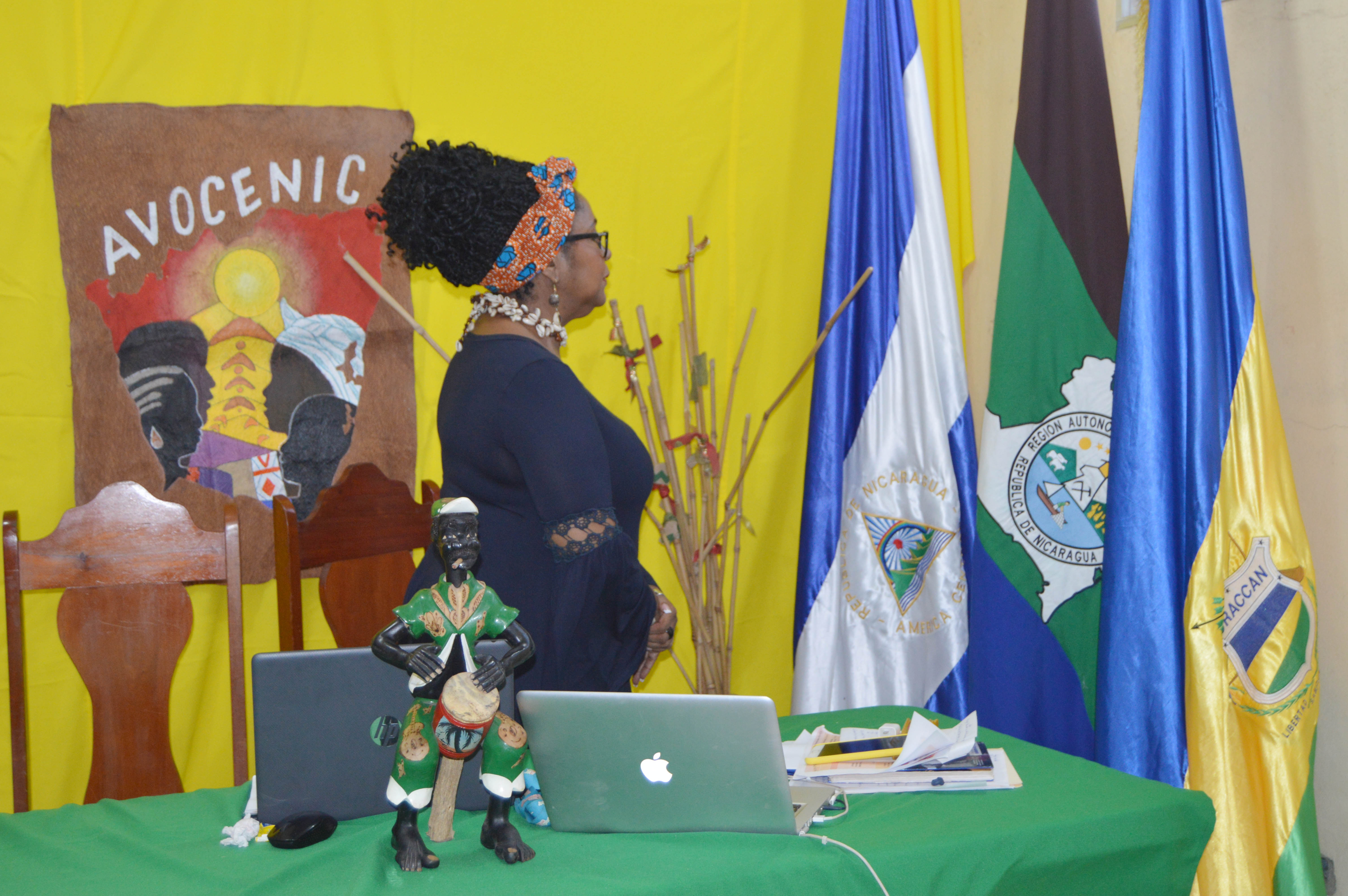 Avocenic co-president Deborah Bush during the closing of the event, singing the sacred notes of the National Anthem.

Reading the proclamation and words of closures

Teacher Deborah Bush, coordinator-moderator general of the IV Afro-descendant Colloquium and co-chair of Avocenic, and Teacher Yuri Zapata, representing the First Intercultural Community University in Latin America, URACCCAN, were responsible for giving the closing words of this magnificent event.

Among the main arguments set out in the Proclamation are: Highlighting the guidelines of the World Conference against Racism (Durban, 2001), which provided "the comprehensive human rights framework for the well-being and development of Afro-descendants and a solid basis for combating racism, discrimination, xenophobia and related intolerance".

Likeever, "recognizing that steps have been taken in the national and international frameworks around making Visible Afro-Descendant Diversity in Latin America and the World", in addition, "Afro-descendant women, we have managed to maintain ourselves over time through our own efforts for the perpetuity of our peoples, continuously mobilizing and locating on regional and international agendas the issue of diversity of the African diaspora" , read the document.

Another agreement is to "request national States and international bodies a commitment to ensure, through public policies, inclusive, equitable, relevant, fair and intercultural development programmes and projects that will give it access to the fulfilment of the Sustainable Development Goals (SDGs) and the 2030 Agenda".

Finally, Bush stated that the International Commission of Afro-Descendant Colloquiums, in use of its powers, determines to designate the next headquarters of the V International Colloquium of Afro-descendants to the country of Bolivia, in 2022, the responsibility and organization of the same will be in charge of the Licda. Erika Knijnenburg Cordero, president of the Nelson Mandela Diaspora.

URACCAN, standing out at the IV International Colloquium of Afro-descendants

For his part, Master Zapata thanked the organization Avocenic for putting himself at the head of this magnificent event, in coordination with the URACCAN, which was finally successful, full of mixed feelings, where spaces were fostered in the search for actions to find the Good Live of the Afro-descendant people, the teacher said.

"It was two intense days of work where there were 9 themed tables that were designed to make visible the reality of Afro-descendant peoples in Latin America and the world (...); we have seen in these two days how the voices of young people have been articulated with people with much more experience and that also indicates a articulation of the knowledge systems of the Afro-descendant generations," Zapata explained.

In concluding, the representative of URACCAN emphasized that colloquials were spaces for reflection on the realities of peoples. "This IV colloquium has had a woman's face," Zapata said, adding that, they are spaces where the thoughts of Afro-descendants are weaving paths to build new realities, more inclusive in Afro diversity, Yuri Zapata concluded.