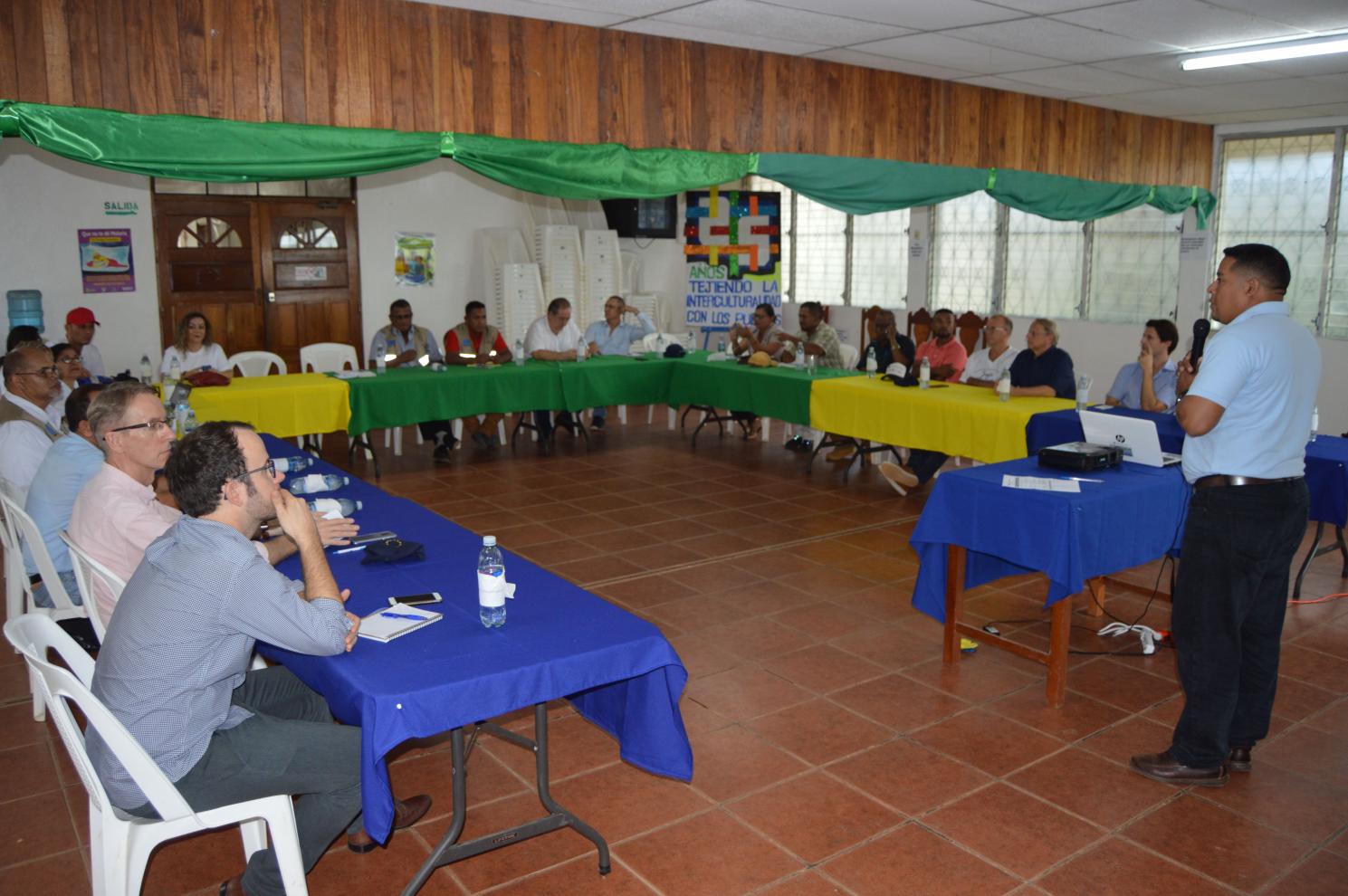 The University of the Autonomous Regions of the Caribbean Coast of Nicaragua (URACCAN), through its Institute of Natural Resources, Environment and Sustainable Development (IREMADES-URACCAN) of the Bilwi campus, received cooperative delegations and strategic partners from the university, from the European Union and Horizont3000.

The Phd. Enrique Cordón, vice-chancellor of URACCAN at the Bilwi compound, welcomed ambassadors from Italy, Spain, France, Luxembourg and Germany; similarly to the representatives of the European Union, Horizont3000, Territorial Governments of Puerto Cabezas, who have been part of the Coastal and Marine Ecosystems project of Nicaragua's Caribbean Coast.

In this sense, the Phd. Cordón explained to the participants the intercultural community approach of URACCAN, becoming that, "It is oriented to the indigenous peoples of the Caribbean Coast of Nicaragua, we on the Coast are 6 ethnic groups, each ethnic group represents a people and on that basis we have a lot of students from those peoples, for this reason, our educational model is oriented towards a model of Intercultural Community University" Exposed.

For his part, Master Marcos Williamson, director of IREMADES-URACCAN said that the visit of ambassadors is a way of evaluating the projects financed by the European Union, he also stated that since the university it has been possible to sustain projects that contribute to the Good Living / Good Living of peoples, "As URACCAN valued that it was an iconic project, for the first time we are entering a coastal ecosystem project," Williamson said, adding that it has been an apprenticeship process, where innovative creations have been made, "We have a biological station in the Miskitus Keys, we are experimenting with locust shelters and we are rehearsing with lobster fattening," he argued.

Since URACCAN works hand in hand with the Indigenous Territorial Governments of the Caribbean Coast, that is why, through this project of Coastal and Marine Ecosystems, a joint articulation with the community has been achieved, "The territories have been our best ally, we understand that the territories are the owners and communities that have the right... we can't come to try to impose anything on the community, we have to talk to them, free, prior and informed consent and that way the project is designed," Master Williamson said.

In addition, Christina Hurnicke, Regional Director in Latin America at Horizont3000, determined that the project has been a substantial element for both the universities involved, in this case URACCAN and BICU, as well as for the Territorial Governments and certainly the cooperators, the European Union and Horizont3000, "It has been fundamental to protect, to sustain and continue to cultivate flora and fauna, in maritime resources , taking care of the coasts, protecting them from garbage, really protecting these natural resources while we can," he said.

In conclusion, he commented that the alliance between the Austrian Development Cooperation Organization (Horizont3000) and the URACCAN, it has been during these 25 years of founding this house of intercultural higher studies, focusing on the growth of the Leadership School, "We have, at least the 25 years that URACCAN has of being sisters and brothers, really Horizont3000 welcomed the idea of founding a university in the Autonomous Regions of the Caribbean in 1994 , and gave his full support, managed funding to build that alma mater that brings Higher Education closer to indigenous and Afro-descendant communities," he concluded.