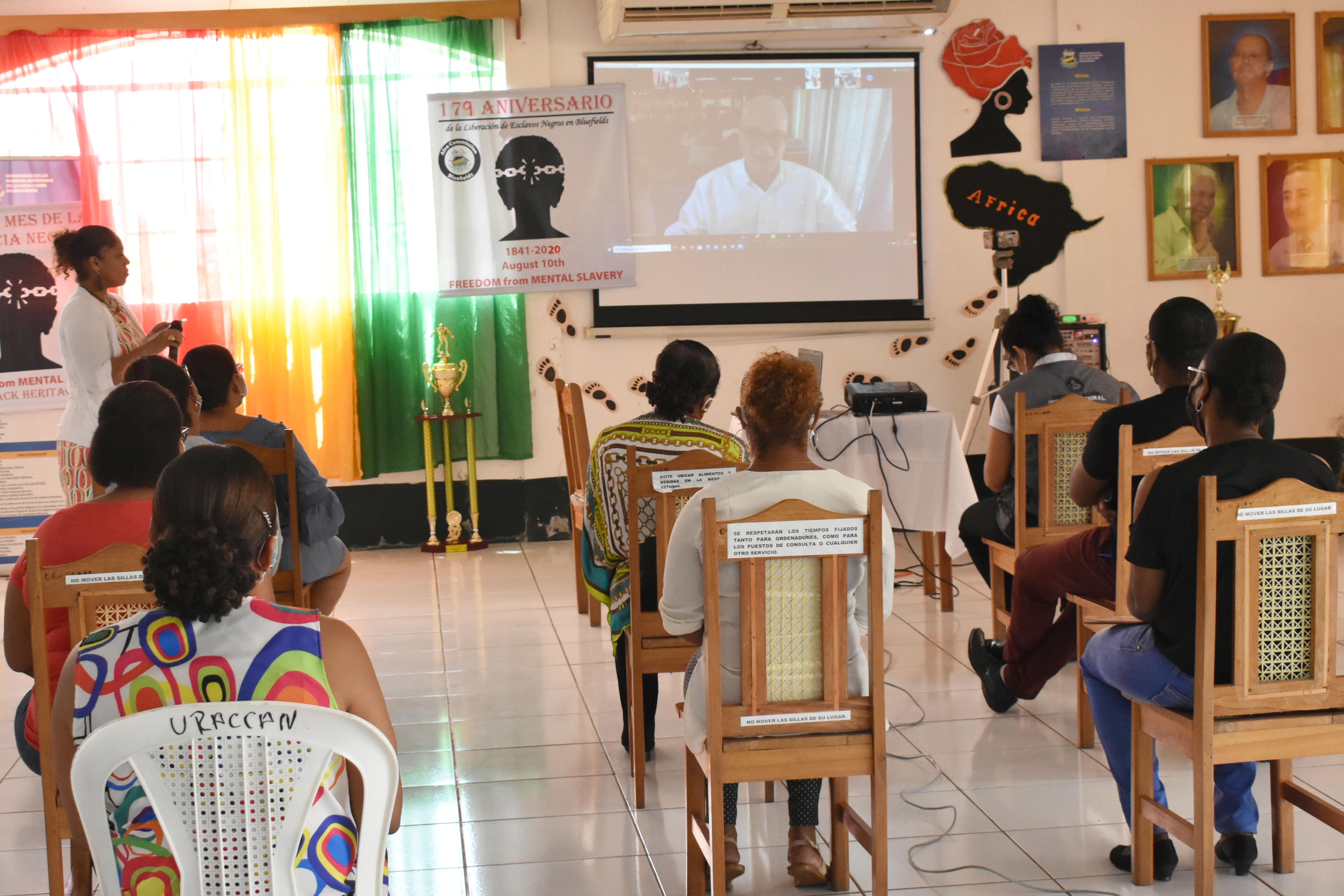 Dr. Gordon dreams of a future without differences between the different peoples.

This work tells the story of a vigorous, courageous and complex people: the Creole people.

URACCAN, through the Afro Commission of the Bluefields venue, organized an important event: the presentation of the book "Disparate Diasporas", written by Dr. Edmundo T. Gordon and translated into Spanish in 2019 by URACCAN, through SAIH's financial cooperation. This book, by a researcher and professor at the University of Texas at Austin, tells the story of a vigorous and complex town: the Creole people.

Summarizing the history of this town has not been an easy task for its illustrious author, mainly because the cultural and racial content of Creole identity has changed over time. Hence, from his deep experience, Dr. Gordon says that, "historically, the formation of Creole identity has been a tactical process negotiated and structured by unequal relations of power".

Through his valuable research, Dr. Gordon contributes to "new literature on transnational and dimpric identity formation processes", as well as to "theoretical debates about hegemony and processes of national, racial and cultural identity in Latin America, particularly to the extent that they relate to populations of African descent".

In this regard, teacher Bernardine Dixon, director of CEIMM, stated that "for the first intercultural community university, the book Diasporas Dispares undoubtedly contributes to the strengthening of the identity of the Afro-descendant peoples of the Caribbean Coast, specifically with the Creole people".

In addition, the director of CEIMM, in her own name and carrying the message of Rectory and this whole great family, added that "on behalf of URACCAN University and on behalf of the rector, Dr. Alta Hooker, we externalized our congratulations to Dr. Gordon on this valuable contribution to the Nicaraguan Caribbean Coast".

University cooperation in the translation process

La PhD. Eva Hodgson explained that the book, "consists of seven chapters; content analyses in depth the origins of Creole society and how it has evolved over the years."

"URACCAN played a fundamental and decisive role in the translation into Spanish and its subsequent printing to be published, through funds sponsored by SAIH; otherwise it was not a reality that today we can have this book translated into Spanish," Hodgson said.

Dr. Gordon's research is in force, because from his perspective, understanding the processes by which Creole identity has historically been formed, allows us to understand the struggles that this Caribbean Coast people is currently fighting, which also reflects the archetype of resistance of the peoples of Abya Yala.

According to the author, during the presentation of his work, the struggle that this people fights, in the past and the present, is against those who try to oppress it, because it is not "a situation of interculturality, but of racial hegemony and racial struggle".

"For me," Dr. Gordon said strongly, "I have a dream: that in the future we may come to have no differences between the different peoples."

The teacher Bernardine Dixon referred to the contributions that this house of study has been making since the accompaniment to the Afro-descendant peoples, starting from their realities and worldviews.

"Part of our raison d'e eye as an intercultural community university, since its foundation, is intercultural accompaniment to Afro-descendant peoples, who along our journey have strengthened this commitment from different points of view and actions," stressed the director of CEIMM.

In addition, Teacher Dixon explained that "as an institution, we have an Afro-descendant policy within the framework of the international decade of Afro-descendant peoples, with their corresponding plan of action."

Contributions to culture from the Bluefields venue

The director of CEIMM highlighted that "URACCAN has declared the Bluefields campus as a specialist in Afro-descendant studies, for the sociocultural characteristics of Afro-descendant populations and the Afro Commission has been institutionalized within the university, with a relevant role in the visibility and recognition of these peoples, their knowledge and deeds, whose work transcends the campus itself , radiating to the university and its action throughout the two Autonomous Regions."
Tags
URACCAN Bluefileds
CEIMM
Diásporas Dispares
Previous
Next
sfy39587stp16