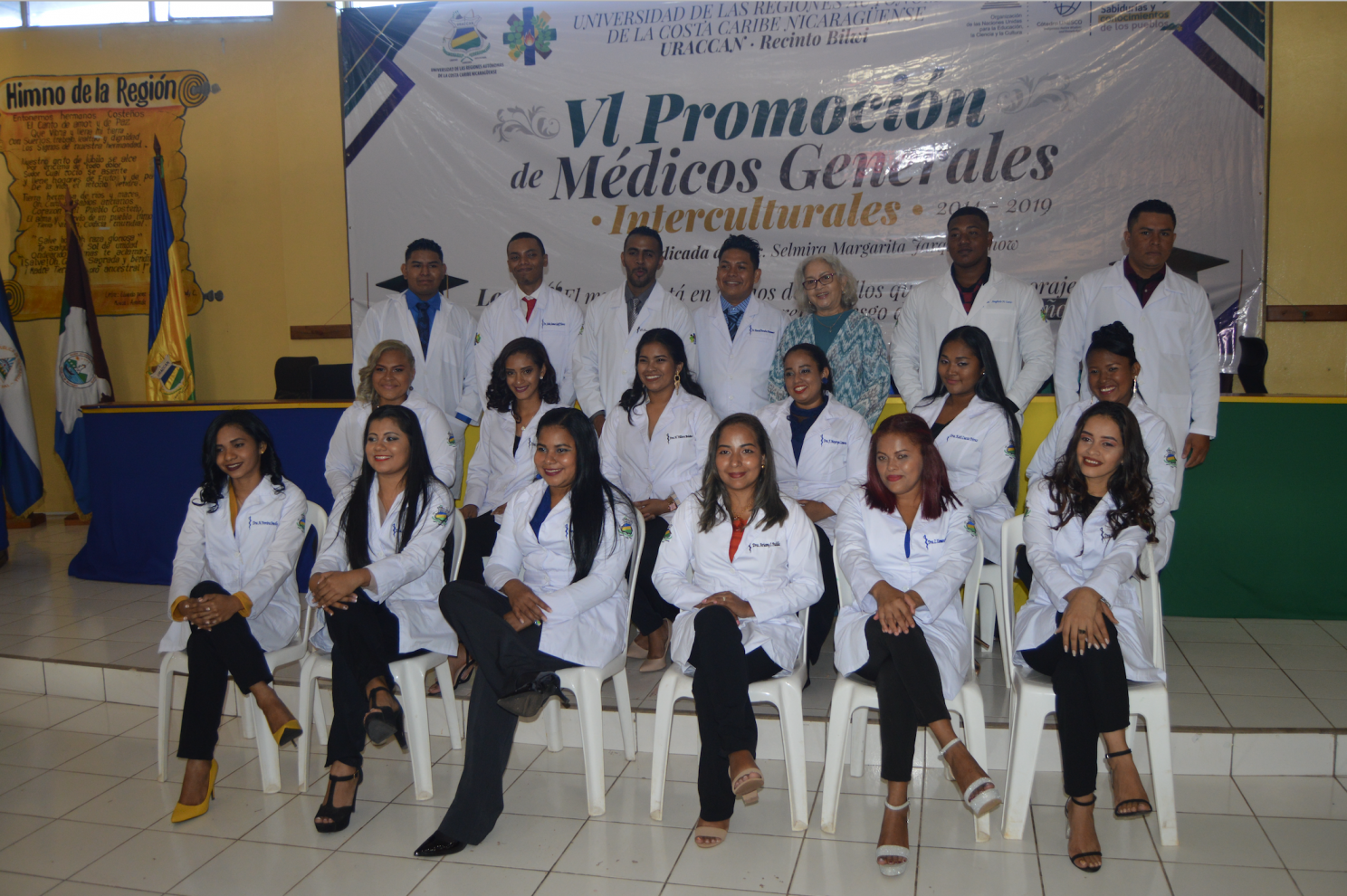 More than 100 doctors who contribute to the regional health system

In this regard, Dr. Ivania López, coordinator of the area of Health Sciences at the Bilwi campus, highlighted that the university dressed up by promoting more intercultural doctors who will strengthen the region's health system, "these 19 students are intercultural general physicians, we have followed and accompanied these students for six years, today they are fulfilling the first step of their training".

In 2019 the university celebrated a decade of the opening of the career of Intercultural Medicine and this year celebrated its promotion under the motto: "The world is in the hands of those who have the courage to risk living their dreams".

A unique contribution to the Caribbean Coast

The PhD. Enrique Cordón, vice-chancellor of the venue, stressed that URACCAN has "the joy of delivering to society these 19 new professionals, who through the learnings acquired are ready to radiate the Caribbean health system".

The vice-chancellor reminded them that it is time to take the next step so that they "can know (more) the feelings of the Coastal people, recognizing that most of the patients who arrive at hospitals are from indigenous communities."

Teacher Margarita Selmira Jarquín, was excited by the dedication to signify a recognition of her 51 years of experience in the service of teaching work, "of those, 24 years I have been at URACCAN, it is a recognition of high honor to have been selected by this group of students, who when they arrived, came fearful, shy, thinking that they were taking a risk to achieve that great dream" Said.

The doctors dedicated the promotion to her for her contribution and dedication, who gave them the subject of Oral and Written Communication, and she was also in charge on the Caribbean Coast for six years of the program "Forward Woman", which scholarships students of the female sex so that they can solve the expenses of their studies of Intercultural Medicine.

Emotions found with a vocation for service

John Goff, best student and new professional in the career of Intercultural Medicine, said that graduating from URACCAN is a great honor "I had the great luck and blessing of God to have been born in this region and have this opportunity to graduate from this career even in our homes."

Likewise, Karla Tercero, a new intercultural general physician, emphasized that this activity fills her with feelings, emotions and dreams realized "we are always ready at the service of others, that is our motto, always to be in struggle for the service of patients (...) studying in our own region is a privilege that costaeños have in the URACCAN, to have medicine in our region."

In harmony with Western and traditional medicine

Students highlighted the implementation of the intercultural approach in classrooms and during the course of their practical classes in health centers by this study house, "they (the university) form intercultural general physicians who respect the worldviews of indigenous and Afro-descendant peoples, thus making a difference and working intertwined between Western medicine and traditional medicine" Conny Litghburgth Fagoth, an intercultural physician, said.

Similarly, Junieska Tercero Suarez, an intercultural physician, highlighted that "intercultural medicine articulates care with traditional medicine and Western medicine, that is, we have our own model of health to work with indigenous and Afro-descendant peoples."

Teacher Ivonne McLean, academic secretary of the Bilwi campus, detailed that, "We are promoting with this about 110 students, promotion is a stage of students where they enter their rotating boarding school, and the Minsa recognizes them as internal doctors and that year is still the training process between the university and the Ministry of Health."

The academic concluded by detailing that during boarding school students are also dedicated to conducting their monograph as a culmination of studies, "they are internal doctors, but they are still active students of the university, this is their seventh year, once they spend the year of internment and defend their monograph become graduates, they are already doctors and can manage their codes and the degree process".