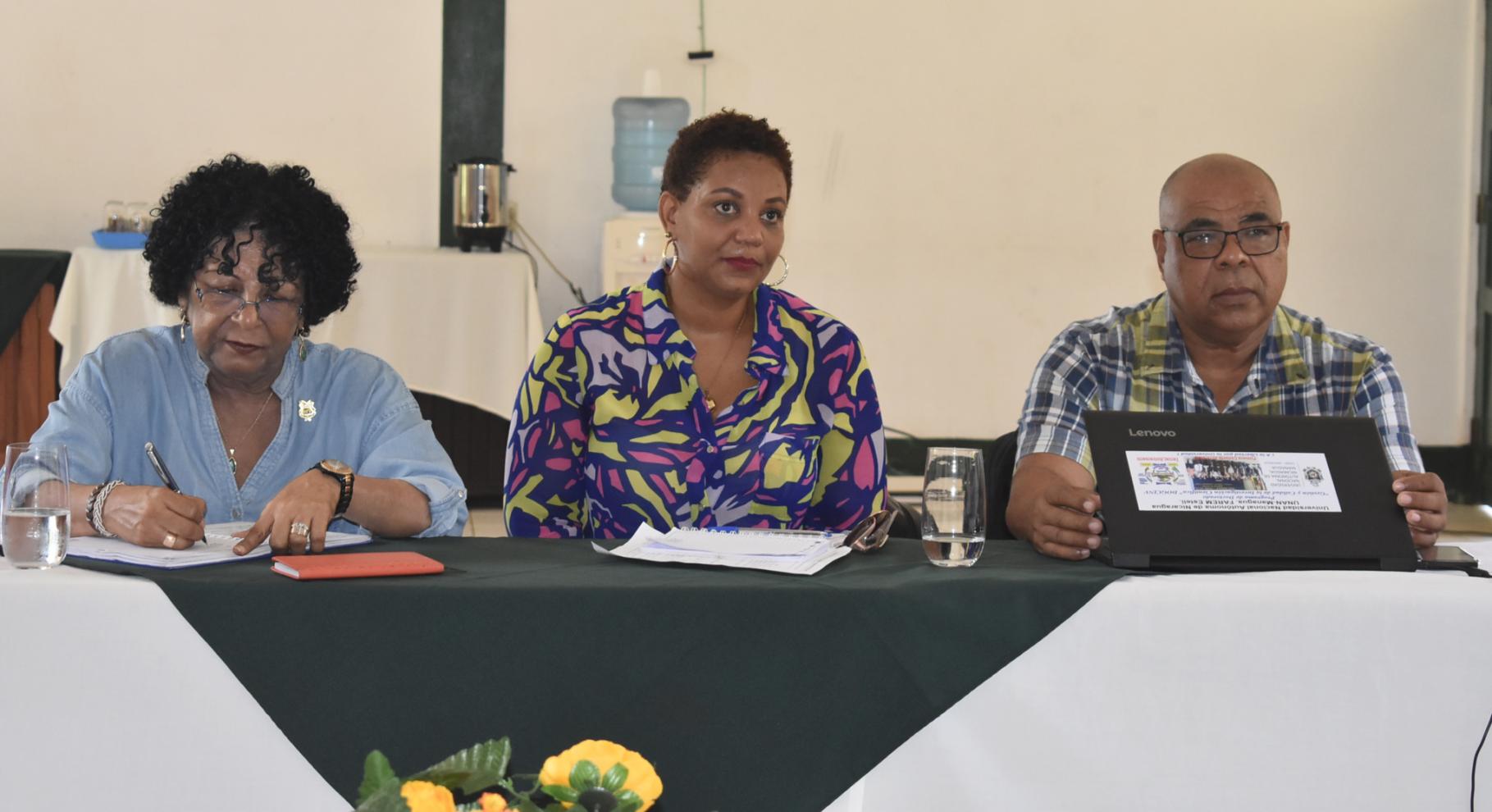 The University of the Autonomous Regions of the Nicaraguan Caribbean Coast (URACCAN), with the aim of strengthening higher education in the Autonomous Regions, held a working session in conjunction with Bluefields Indian & Caribbean University (Bicu) and the University of West Indies (Mona Campus, Jamaica), with the aim of presenting proposals that articulate the efforts and strengthening of regional autonomy , this activity took place on the Bluefields university campus.

In this sense, a group of academics from URACCAN, headed by Dr. Alta Hooker, rector of this house of intercultural higher education, were in charge of receiving and representing the university in the working session, where a proposal was created by the two universities of the region, which is focused on knowledge management and the strengthening of regional autonomy , as well as to contribute to the improvements in the living conditions of peoples, in a sustainable way from an Intercultural perspective of gender and restitution of rights.

That is why the rector of URACCAN stated that, together the "partners of URACCAN and BICU to translate in a document, what we want to work with West Indies University, and the areas that interest each of the universities, we manage to raise the needs; and a document containing the general and specific objectives, as well as the expected results, now what would be needed is to finish the introductory part and background," Alta Hooker said.

Hooker also stated that this proposal focuses on "revitalization of culture, and strengthening of identity", which are the main purposes since URACCAN's mission and vision.

José Saballos, PhD, director of the external cooperation area of URACCAN, was in charge of presenting the guidelines of the proposal, among them, the strengthening of identity, "This line of collaboration is being silvered on the basis of the strengthening of an identity, Afro and diaspora", in addition, addressed as a line of work, to make a collaborative exercise with the theme of origin of the Caribbean and Caribbean , Saballos detailed.

Faced with this guideline, the rector of URACCAN emphasized, that this will help the revitalization of the cultures, traditions and beliefs typical of the peoples of the country, "If we knew where our roots are from we would have, a sense of belonging, we are Nicaraguans, but where our roots are, where we came from," Hooker said.

Purposes aimed at the Good Life of Peoples

The academics of both universities jointly raised in this document, establish platforms of cooperation, solidarity, accompaniment and complementarity of knowledge, knowledge and institutional activities between URACCAN, Bicu and West Indies University, to strengthen the identity of peoples and their life plans, as well as to bring closer to the historical visions and longings of the peoples and communities of the Caribbean.

As part of the work they intend to do is also to promote programs and academic studies focused on development with identity and Good Living from an intercultural perspective of gender, in the same way, to strengthen processes of sustainable management of natural resources and the environment.

Entrepreneurship and innovation as a sociocultural basis and own knowledge.

The team also included in the proposal to promote initiatives of entrepreneurship and social and economic innovation for the Good Living, from the socio-cultural basis and the management of their own knowledge.

It should be noted that, this articulated work between the three universities, will be presented to the central government for further negotiation with west indies, and any other Caribbean higher education institution, said Roy Lopez, vice-chancellor of Bluefields Indian & Caribbean University (Bicu).