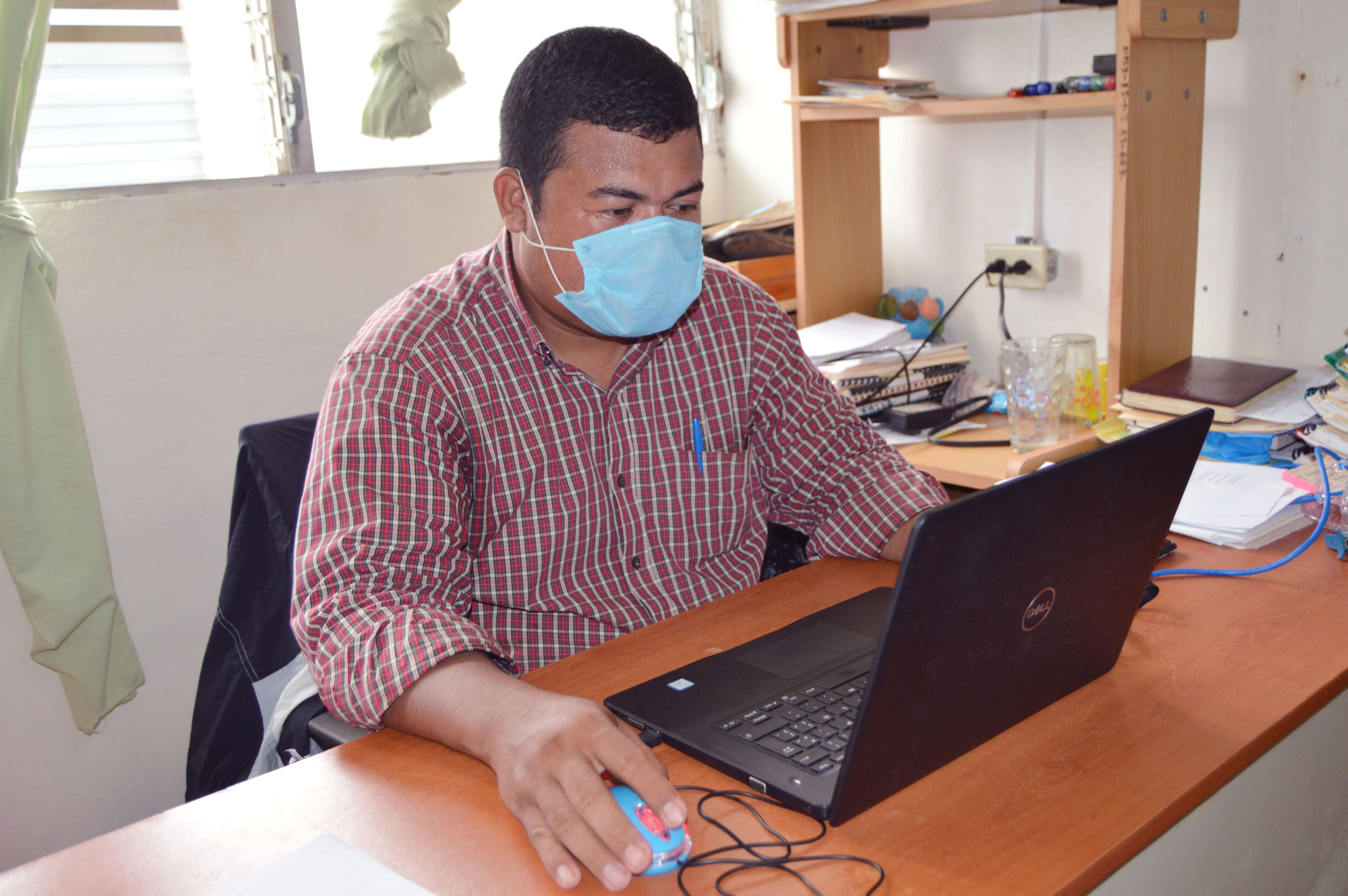 Professor Williams teaches mathematics in Spanish and Miskito, guaranteeing the right of young people to study and express themselves in their mother tongue.

URACCAN has stood out for training men and women who strengthen intercultural education from and for indigenous, Afro-descendant and mixed-race peoples on Nicaragua's Caribbean Coast. One of them is Master Elebe Williams Muller, who has made great contributions with his mathematical knowledge, not only to the university community, but also to high school students in the city of Bilwi.

Williams was born on August 27, 1980, in the Miskita community of San Jerónimo, Río Coco, Municipality of Waspam, North Caribbean; since childhood he has struggled to be a person of good, full of professionalism and passionate about each of his educational chores. His secondary school studies were received at the Juan Amos Comenius College in Bilwi.

His steps in higher education

After high school, Williams became interested in a medical degree, but, for personal reasons, failed to accomplish his job, so he immediately opted for Business Administration. "When I was a sophomore, URACCAN was offering a career in Mathematics; I made an application and was approved; that's where my whole history begins in the academic part with the university, that's where I studied the Bachelor of Mathematics at (URACCAN) New Guinea," the teacher said.

15 years ago he joined the large URACCAN family at the Bilwi compound, where he has demonstrated the tireless struggle to help the student community, fulfilling each of his professional dreams.

At the end of his bachelor's degree, URACCAN offered him a scholarship to study a Master's degree in Rural Education, which was developed at the National Autonomous University of Nicaragua (UNAN-León). "Then, in 2010, I entered an Erasmus Mundos program to go to study another Master's Degree in Mathematical Modeling, Statistics and Computing in Spain, which I completed in 2011," Williams said.

Currently, URACCAN offered Williams the opportunity to be part of the first doctors of this study house, being one of the PhD students in Intercultural Studies offered by this study house at the level of Abya Yala (Latin America). At this time, they are in the phase of the construction of the thesis project, where together with the students of the program they have presented their research proposals to the commission that evaluates them in a virtual way.

From November last year until March 2020, Professor Elebe Williams, in compliance with one of the requirements of the Doctoral Program, went to Spain to hold an international internship at the University of Extremadura, and in this way he was able to make exchanges of experiences, in addition to taking advantage of the space to specialize in some topics. "In my case, research on math activities," Williams explained, adding that he was able to publish two scientific articles during his time in the European country.

It should be noted that his doctoral research topic has already been approved by the commission in charge for these academic matters. Teacher Elebe Williams will investigate "Learning Scenarios of Mathematics in Multicultural Contexts in Higher Education," where he aims to analyze the context in which students learn math from the teaching part.

Creation of the Eliaty Academy of Mathematics

Master Elebe created the Eliaty Academy of Mathematics, from where he helps young people understand everything related to this field of study, explaining them in Spanish and miskitus, for a better understanding and guaranteeing their right to study and express themselves in their mother tongue.

In this instance, he has made television programs through the URACCAN Intercultural Community Channel in Bilwi, from where he has strengthened the knowledge of high school students trying to enter universities. Williams prepared them in advance for the admissions exam for those traveling to study in the Pacific at national universities, and has also managed to boost the Eliaty Mathematics Olympics, where several Bilwi colleges were involved, certainly with the coordination of the university.

"From my teaching perspective, I have always had a dream: to contribute to growth in the city of Bilwi; In this sense, I have worked in several areas to influence mathematics, within them I can mention an academy (...) that I worked with young people who wanted to take the admissions exam in the Pacific, also the Eliaty Mathematics Olympics, where the idea was to strengthen the capacities of high school students in solving analytical, logical, but , also of the cultural part of mathematics," the teacher said.

When some schools in Bilwi decided to temporarily suspend classes as a result of the pandemic, Master Elebe, in conjunction with URACCAN Mathematics teachers, had the initiative to carry out a television program: "Eliaty Mathematics Reinforcement", transmitted by the cable signal and official Facebook page of the Intercultural Community Channel, URACCAN Channel 5, to reinforce the educational units that were taught in secondary schools; all this was done under an agreement with the Ministry of Education, Regional Government and the university.

Training in humanitarian principles and values

Being originally from an indigenous community was no impediment to Williams becoming professionalized and a model for future professionals in the Autonomous Regions of the Caribbean Coast.

"For me, the training process has been a challenge, because it has been quite difficult; sometimes there are many concepts that young people who leave their communities have the goal of studying, many difficulties that you go through, whether on the economic side, in the capacities, but something very important is the insistence and relevance that one has to continue to form, but on the other hand the opportunities that URACCAN was providing me and opening steps; that has allowed me to continue to grow as a person and as a professional," said Williams Muller.

Currently, the commendable Professor Elebe is coordinator of the area of Humanities, Legal and Social Sciences, this being a new challenge offered by the university, so that it continues to harvest knowledge and knowledge, transmitting them to the new generations, with social commitment and values such as discipline, constancy, solidarity and erdindourism.