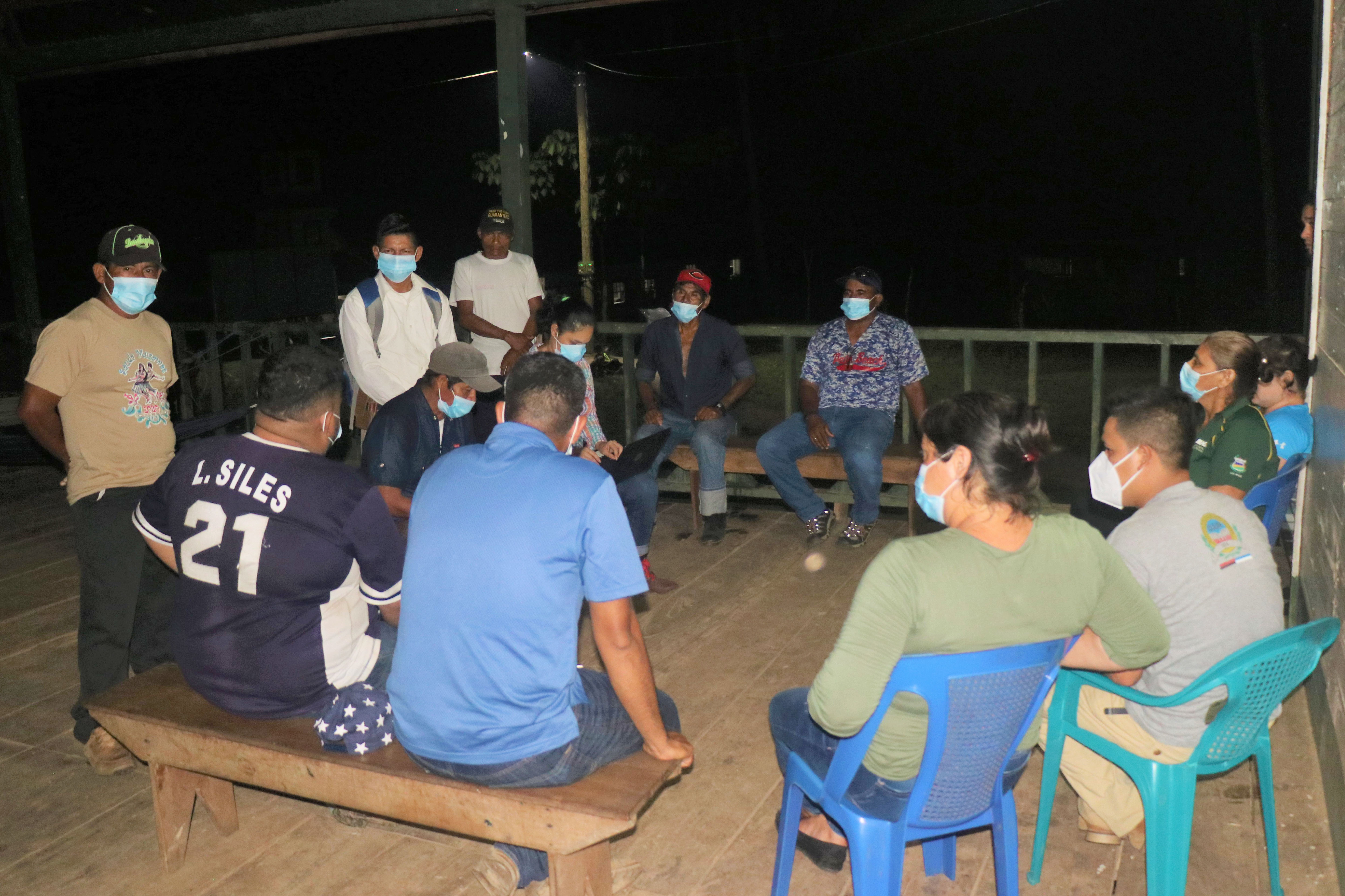 URACCAN authorities and students share and learn from indigenous peoples. In this image, they converse with leaders of the Mayangna people.

On the 528th birthday of the commemoration of the Day of The Black and Popular Indigenous Resistance, a group of students and teachers from URACCAN las Minas enclosure visited the Mayangna Sauni Bas community of the municipality of Siuna, whose territory has eight indigenous communities, 231 families and a population of 931 inhabitants. Although this town is concentrated in this municipality, its management is carried out in Bonanza and El Cuá, Bocay.

Professor Luis Herrera Siles, head of the Institute for Studies and Promotion of Autonomy (IEPA), stated that "the objectives of the visit were several, among them: the celebration of the 26 years of our university, celebrate the 33rd anniversary of Autonomy and celebrate the Day of The Black and Popular Indigenous Resistance".

"From each of the dialogue spaces we aim, as a university, that students from different careers could establish a horizontal dialogue with the fourth and fifth year students of the Agustín Mercado Education Center, of the Mayangna Sauni Bas community, to encourage them in the continuity of their higher education at the university," professor Herrera said.

Regarding the rights of indigenous peoples belonging to the Mayangna territory, Herrera explained that "indigenous peoples enjoy a historical right that must be respected, after more than 5 centuries of resistance this issue remains fundamental and as a study house we approach the community with themes of community strengthening, to that same extent resistance will be more efficient and with better results".

Years of struggle and stamina

Nethan Mordy Taylor, president of the Mayangna Sauni Bas indigenous territory, said that "we are happy with this visit from the university as it brings us closer and gives us guidelines for community development."

"However, what we have to this day has been years of constant struggles from our ancestors to the present day, those struggles that have been reflected in abandonment, in invasion of our lands, in the deforestation of our forests and the use of our resources," the leader said.

In the same order of struggle and resistance, the Center for Multi-Ethnic Women's Studies and Information (CEIMM) of URACCAN at its Siuna campus, held a meeting with the Sikilta Indigenous Women's Association (AMIS), with the aim of conversing and providing the necessary accompaniment in their fight to restitute women's rights, "a fundamental element is education and in that sense we are doing everything we can to ensure that they can access and develop in a personal and community-based manner," PhD said. Jacoba Dávila Molina, coordinate of CEIMM in Las Minas.

Dreams of the Mayangna Nation

According to Nethan Mordy Taylor, they currently have recorded a number of 85 graduate high school students and their biggest demand is to continue higher education.

Aware that without education there is no development, "we ask the university to include in its strategic plans the construction of a university sub-site in our community to facilitate education in our young people, we want it to include careers that go according to our experiences and allow us to develop day by day," the indigenous leader requested.

Experiences and expectations of college students

The student of Local Development, Iván Latino, assured me that this experience "was comforting, transformed me into the sense of reflection in the face of the loss of our ancestral roots, this experience filled me with a desire to work to preserve our indigenous identity and to be able to seek alternatives of adaptation in the face of the irresponsible globalization of the standard society of the world, without altering our cost-like worldview".

Walquiria Otero, president of the Presagio Cultural Movement, stated that "this coexistence left fruitful results for me, as it helped me visualize another environment and leave me with ample knowledge to motivate me to be able to write and transmit a more real message on the radio-novel that is being promoted by the CEIMM and where I participate as Presagio".