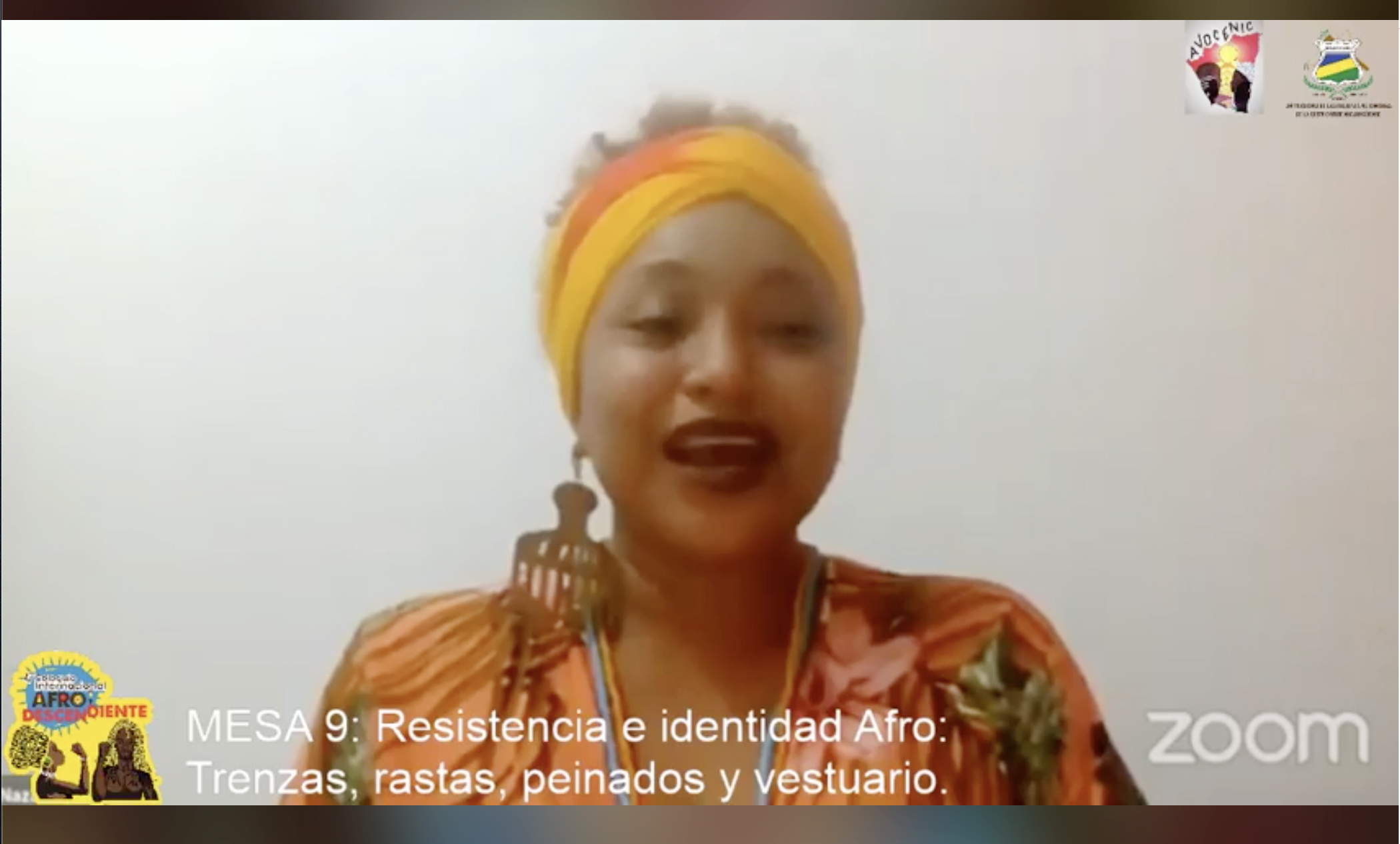 A cultural essence that has held firm for centuries.

The Afro people, through their braids and hairstyles, their rasta style and colorful costumes, connect with their ancestrality, and, from that essence, rises resilient and proud of their cultural identity. On this subject, table 9 of the Iv Afro-Descendant International Colloquium reflected four important Afro cultural thinkers and promoters.

In charge of the iconic Mesa Themed 9, was the Afro-femininist Finix Castrillo Williams, for whom hair represents not only a style, but also a history, a philosophy of life, a cultural essence that has remained firm over several centuries.

I was like, "Through braids I resigned my identity."

The first participant, speaking in Brazilian Portuguese, is originally from the periphery of the Amazon. Her name is Maria de Nazaré Costa Da Cruz and, in addition to being an educator, she makes braids in Belém do Pará. She is coordinator of CONEN / AfroianaUrukadan Project. Nazaré titled his presentation "Aphrodisiphical Identities, weaving ancestral paths", through which he hoped to pay homage "to the elderly and the newest".

According to this Brazilian artist, braids and turbans should encourage Afro debates, as they allow reflection on the spiritual connection. It is also a form of political aesthetic by which an entire people prevail against social prejudice and marginalization. "Braiding hair reconnects me with my ancestral philosophy," Nazaré says.

My dreadlocks was the crown I proudly carried, my way of doing political resistance.

From Costa Rica, representing the Afro-Caribbean lemon area, he attended this momentous kendall Cayasso event, who is an Afro-descendant activist, composer, musician and television presenter. Although he does not show off his "dreadlocks" right now, which he proudly carried for many years, thanks to the cultural identity conveyed to him by his parents, Cayasso remains steadfast in his struggle for the rights of Afro-descendant communities, which in his country represent a minority, since according to the 2011 National Census, they make up 7.8 of the population.

Renowned Afro-Colombian curltural manager, community leader and Raizal activist Sergio Bent, also attended this panel, from the Island of San Andrés. Her head, which currently looks shaved, once sported a natural afro, Says Bent. As part of his experience, this creative genius recounts how white Colombians arriving in San Andrés were believed with more authority, as if they owned those territories that their ancestors had populated centuries ago. This, Bent discusses, reflexes the impositions of the political system, responsible for social prejudice and racial discrimination.

Also, the Afro-Colombian representative explained how patriotic festivities set aside Afro communions. Thus Colombian independence, which is celebrated in a big way, but which had no meaning for the Afro people, same as boosting Emancipation Week, which to this day celebrate with joy the last week of July until the 1st. August of each year.

Hamilton: "The basis of discrimination is economic."

Finally, came the luminous participation of Ariel Hamilton, a Rastafari communicator, farmer and activist who, originally from Bluefields, moved to Miami, from where he promoted various projects to promote Rasta art and culture, as well as the unification of Creole communities in the diaspora.

Hamilton categorically stated that discrimination, abuse and abuse against Afro communities are primarily economic in order. Their argument was based on how the capitalist system has occupied the symbols of Afro-descendant cultural identity and turned them into products and goods.

Now it is common, Hamilton concluded, to see fake hairs, all kinds of costumes and emblems painted with African designs, which sell to the Afros themselves, who have stopped handcrafting their clothes and cultural symbols, as the ancestors did.