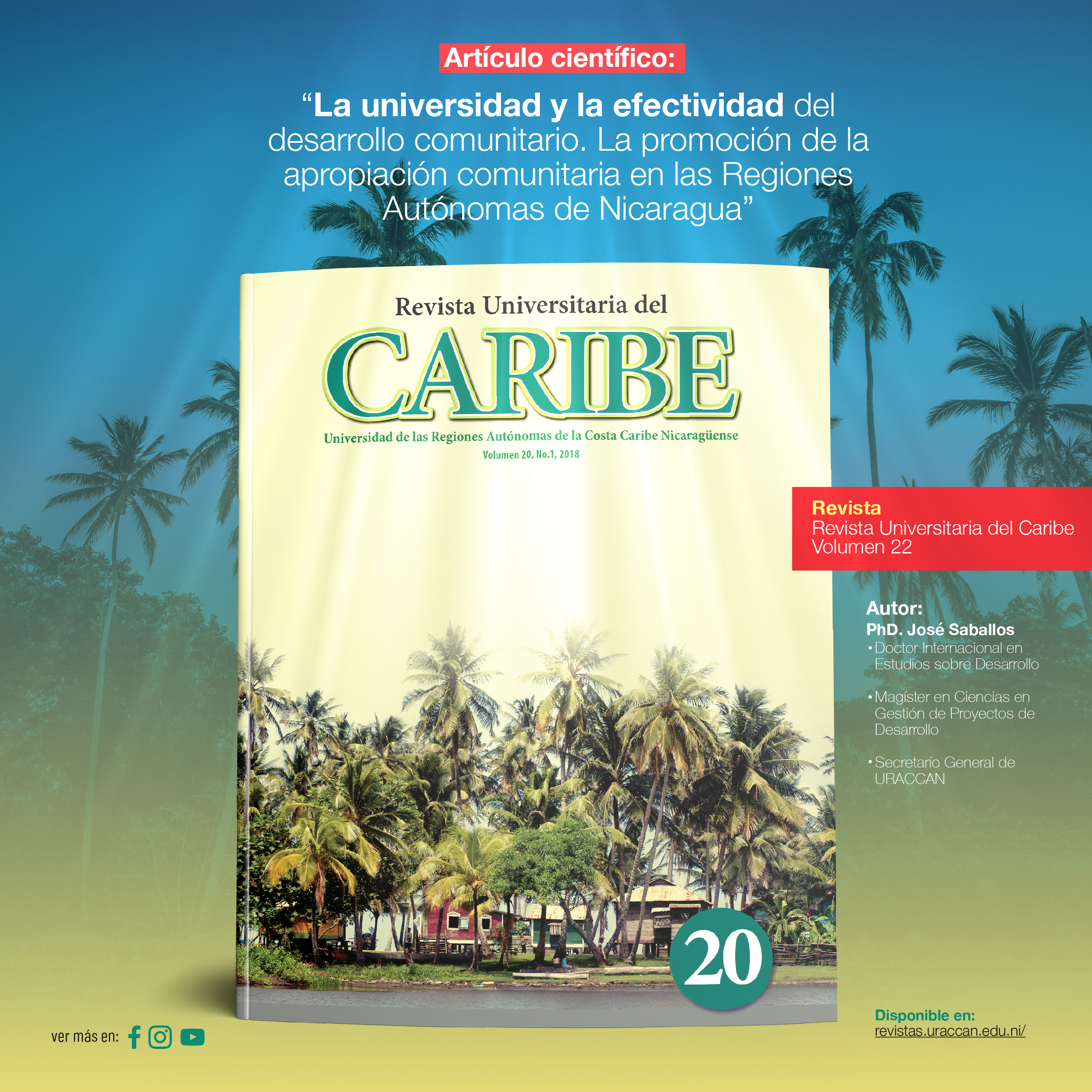 Dr. Saballos incorporates "community appropriation" as a key element for the effectiveness of the accompanying processes.

Research that brings and strengthens Development with Identity

For Dr. José Luis Saballos Velasquez, as for the ancient Greeks, academic life is proportional to physical education. Therefore, after arduous working days, he makes a gym and enjoys moral well-being and great intellectual qualities. And even with all the complexities of his agenda, he develops scientific research of great national and international relevance, among which stands out his doctoral thesis: "The university and the effectiveness of community development. The promotion of community appropriation in the Autonomous Regions of Nicaragua".

With this title, Dr. Saballos defended his research project as a student of the International Doctorate in Development Studies, by the University of the Basque Country, in Spain. His work, so fundamental to URACCAN and Caribbean communities, was then published as "University, Development Effectiveness with Identity and Community Appropriation" (2019), thanks to the support of the Norwegian International Student and Academic Assistance Fund (SAIH).

In addition, the University Magazine of the Caribbean, in volume 20, published an article-summary on the thesis of Dr. Saballos, who is currently secretary general of URACCAN and who since its inception has been part of the walk of this institution, in which it has grown and from which it has assumed great principles and a commitment to contribute to the development with identity of the peoples of the Caribbean Coast. For this reason, his thesis is based on the community's accompaniment and social extension promoted by URACCAN in the Autonomous Regions.

Dr. Saballos' research begins by countering the conception of development from Westernity to the conception of development from indigenous and Afro peoples. Development from the Western paradigm imposes socioeconomic differences between people and places them in a struggle to meet standards of happiness based on consumerism, materialistic and isolated accumulation. While, in the paradigm of the development of indigenous peoples, which URACCAN has assumed as a fundamental part of its philosophy of intercultural life, the community prevails over individual interests, reaffirming cultural and ethnic identity, and aiming for dignified life and good living in harmony with nature.

The Eurocentric vision of development presented itself as a capitalist promise that would generate so many riches that, at some point in history, would overflow and generate better life opportunities, mainly among the poor and marginalized, as if it were a glass where so much liquid is poured that it even goes over so that those below can drink.

However, Dr. Saballos argues, "The impossibility of rapid, meaningful, equitable and sustained poverty alleviation has rethinked in recent years the power of collectivity, affective ties and identity for inclusive development." And that is why the answer to genuine, inclusive, effective and sustainable development is in communities, in their conception of the world and in their ancestral practices.

Therefore, through his proposal, Dr. Saballos contributes "to the construction of the URACCAN Intercultural Community University model" and researches "how this model is effectively linked to the transformation and development needs with identity of the Autonomous Regions."

To this end, Saballos incorporates "community appropriation" as a key element for the effectiveness of the accompanying processes. This approach is fundamental to the experience that Dr. Saballos acquired at the head of URACCAN's External Cooperation area, where he noted firsthand that the success of any university-driven project depends directly on how the community makes it its own, because it feels that its true needs, feelings and knowledge are reflected there.

Only through real prominence, based on community practices, can a project be sustainable over time and bear fruit that lead to development with identity that is how URACCAN has structured and defined it and which with this research is reaffirmed and contributes in its way of materializing this institutional effort. All these theoretical propositions were tested through rigorous scientific methods, among which is the analysis of multiple cases (Miskita Tuara indigenous community, Indigenous Mayangna Españolina community and El Carao mestiza community).

Thanks to this investigative capacity, Dr. Saballos makes his thesis a conceptual and methodological proposal of community accompaniment and appropriation. This in turn reflects Dr. Saballos' immense faith in the URACCAN and the resilience of the original peoples. This concept is fundamental in this research, because resilience means starting a new development after trauma and in that process of recovery relationships and the environment come into play, which is the philosophy of life of indigenous communities.

Since their ancestral practices, ethnic groups, despite the marginality in which they live because of the fierce modern societies and being dramatically reduced, have demonstrated a unique strength, a capacity for resistance that stands before all injustice and a love so connected to Mother Earth that they have been able to forgive and initiate a process of horizontal and harmonious development in their territories.

There, in that inexhaustible source of original wisdom and in his mother nutricia (alma mater), the thesis of Dr. Saballos was born and strengthened, who did not stay in the Western scientific selfishness that cosifies people and nature, but rather moving proactively towards changes and hopes for a Caribbean Coast that, with the accompaniment of URACCAN , has (self)managed its development with identity and has risen ever stronger of all adversity.

Reading, therefore, Dr. Saballos' research represents an inspiring challenge for every reader, both for the scientific solidity with which it is built and for its revealing findings and the delicacy of its writing style.