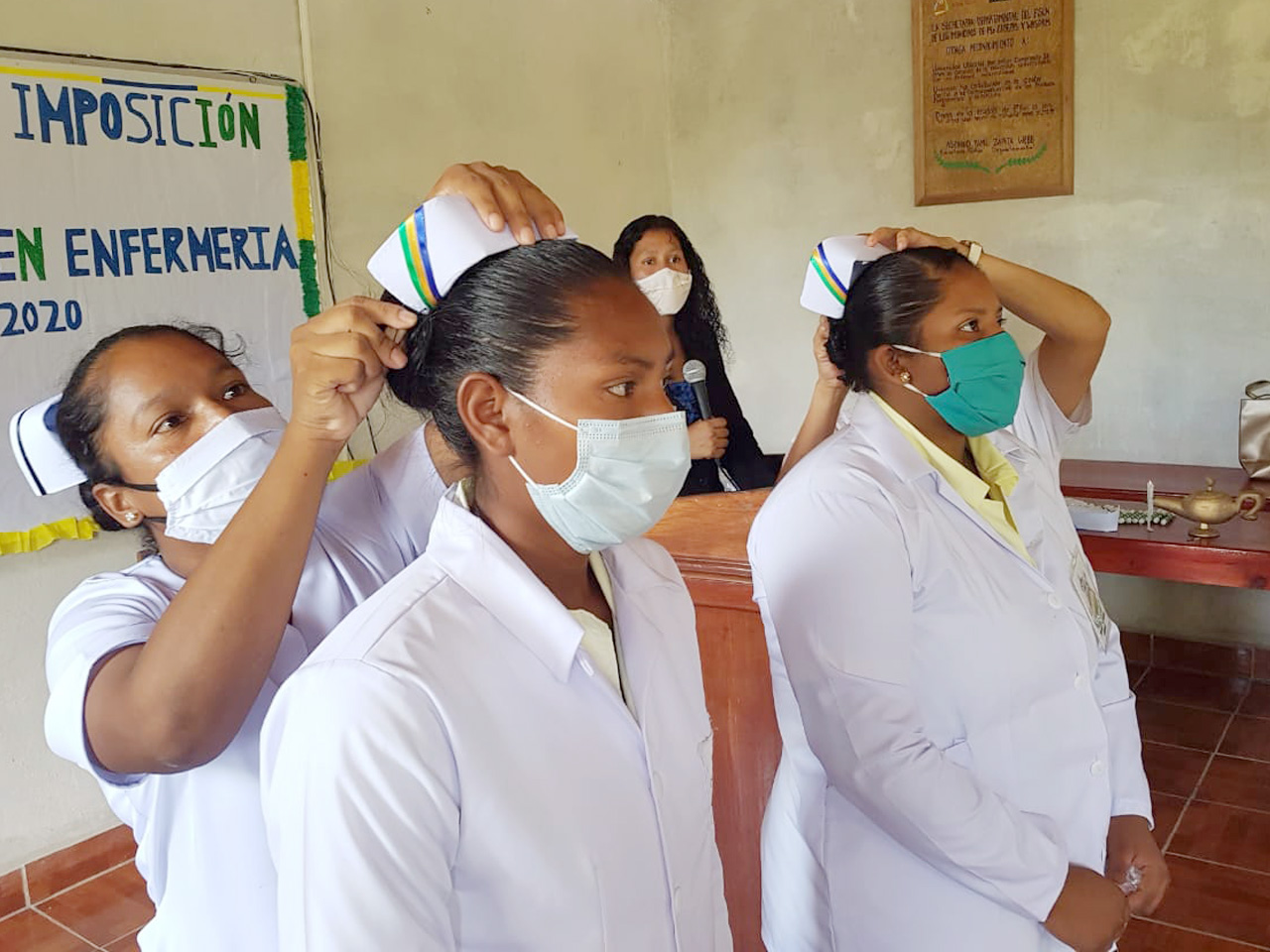 Students of URACCAN Waspam extension, from the Senior Technician in Intercultural Nursing.

In the university extension of Waspam, Río Coco, the third act of imposing cofias was held on students of the Senior Technician in Intercultural Nursing, thus fulfilling the Mission of URACCAN that, for 25 years, professionalizes men and women with intercultural approaches and committed to the development of the Caribbean Coast of Nicaragua.

Professionals who strengthen the Caribbean Coast

Hermes Castellanos, PhD, gave the words of welcome, where he stated that from this Intercultural Community University processes of development and strengthening of Higher Education are promoted; professionals who are proud to be miskitus, Mayangnas, Creoles, branches, garifuna, "and that's what makes us different from The Universities of the Pacific, our cultural diversity that exists on our Caribbean Coast," he said.

Castellanos also stated that URACCAN has trained professionals according to the needs of the Autonomous Regions. "We are taking it a step further with our institutional philosophy, giving way to our Mission and Vision of training Costeño men and women in different areas, in this case in the area of health."

For his part, Enrique Cordón, PhD, vice-chancellor of URACCAN in the Bilwi compound, stated that on this occasion they delivered 36 new professionals to this indigenous territory. "We are reaching about 100 nurses that we are delivering to the municipality of Waspam; previously, 7 or 8 years ago, there were not this number of professionals, today thanks to the university that dream could come true, because that is the raison d'e key of the URACCAN," the vice-chancellor detailed.

Meanings of cofia, lamp and suit

The Licda. Sodelba Borst Finley, representative of the Ministry of Health and a time teacher of the Waspam extension, was in charge of describing the meaning of the cofias, badges and costume used by the new technicians in Professionalized Nursing at the First Intercultural Community University in Latin America.

Borst Finley explained that "the white dress means that it is synonymous with purity and cleanliness, which health personnel have to exercise. The cape represents the weight of patients' suffering on their shoulders and the responsibility they have hired, the cape is also used in special ceremonies."

"Meaning of the lamp: Florence Nightingale has been considered the forerunner of modern infirmary during the Crimean War in 1984, at the evenings after the other fellow nurses retired, she made the solitary rounds and the condition of the patients with her lamp, so she represents the lady's lamp. Cofia means delicacy, sensitivity, selflessness, patience, that we must have the nurses, in addition to simplicity, service to the people as nurses," Borst said.