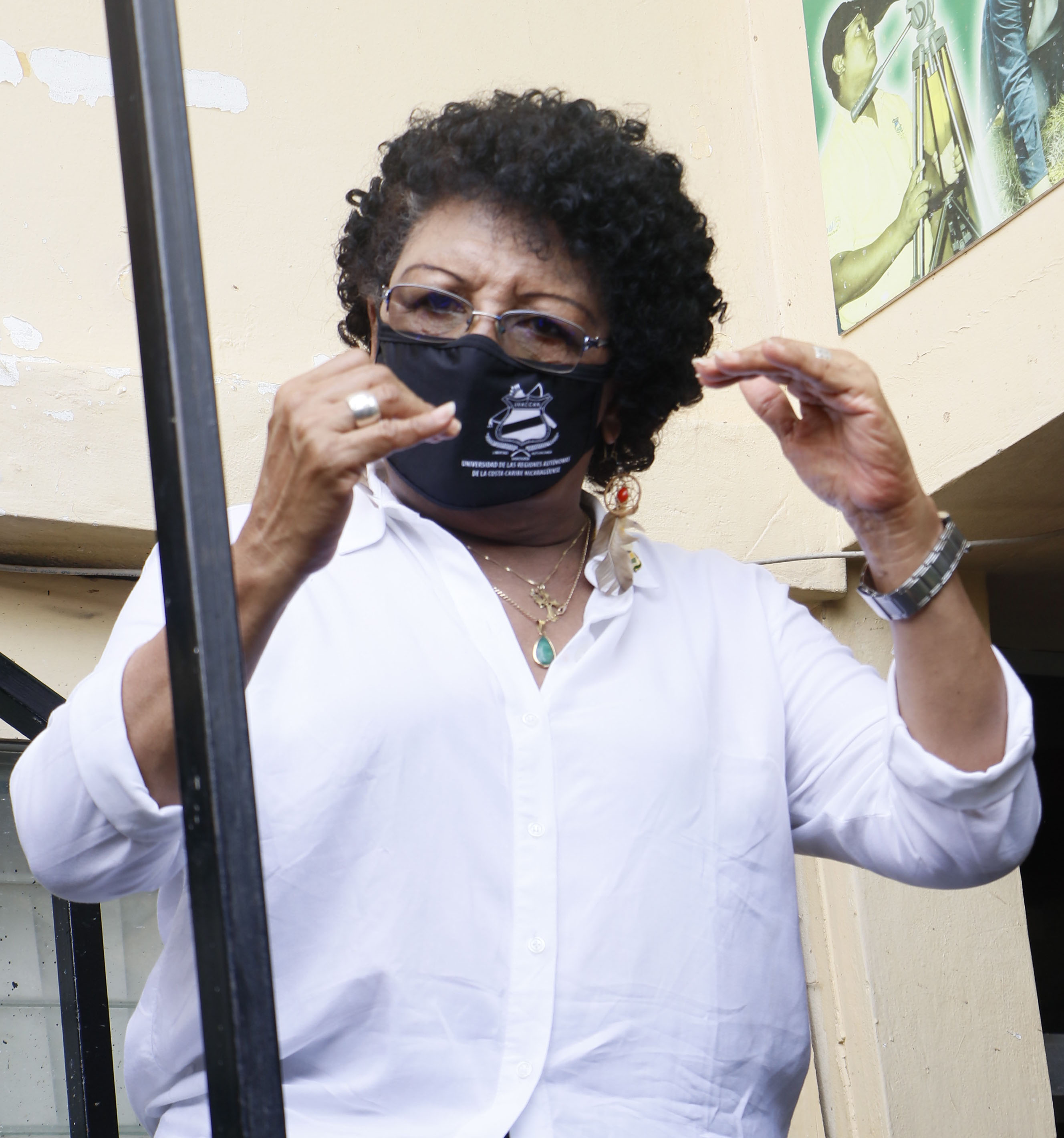 "We continue to receive recognition and that will encourage us to continue walking," Dr Hooker said, alluding to the recently won research and science awards.

"It's not time to cry anymore. I don't have one more tear left. Now is the time to work and move forward," Dr. Alta Hooker, rector of URACCAN, said with full determination as she provided this morning a report on the situation of the enclosures and extensions of the North Caribbean Coast, mainly Bilwi and Siuna, where there are still many families affected.

The hurricane knocked down walls, leaving us almost in absolute nudity, the rector said, "but it did not take URACCAN. URACCAN is still standing, firmer than ever." Meanwhile, we work to care for affected communities and rehabilitate some areas of the Bilwi campus (two modules, the Spirituality Center and The Administration) to be functional and be able to "continue our educational commitment and respond to our students" in terms of their processes, requests and management, so that they feel that "not everything is lost, that we still have the opportunity to save the year , without losing our focus and quality, thinking of the best for our peoples."

In short, the Bilwi enclosure was completely destroyed, in 100% of its facilities and equipment. In addition, the staff working in this educational space lost their homes, being left in an immense zozobra.

On the other hand, from the Las Minas campus, Siuna was the most affected campus. Their workers were severely damaged in their homes. Still, they try to get up and get up at the same time. They collaborate with cleaning and repairs. There the trees fell into noble combat. However, due to the communication difficulties that still exist in the area, an exact calculation of damage could not be established.

El director de Radio URACCAN Siuna, MSc. Gilberto Ariel Artola issued a statement, suring that "our equipment at the transmission plant was severely damaged. We will continue our information work on our social networks", reaffirming its commitment to inform the people of the Caribbean Coast, an action that its intercultural communication team had been carrying out since before both hurricanes hit this territory. The serious damage referred to by Master Artola directly affects Caribbean communities.

With the rosita, Waslala and Bonanza extensions, no communication has been achieved. They're out of power. There were arguments there. Despite this, at all times they served as a refuge and support to the inhabitants of the most vulnerable areas.

Sister universities and partner organizations have shown solidarity with URACCAN. The Central American University Higher Council (CSUCA), in partnership with the Swiss Agency for Development and Cooperation (SDC), and through its president, offered to collaborate with the rehabilitation of the Bilwi site.

In addition, the National Council of Universities (UNC) made a valuable donation to support the repair of un facility in the North Caribbean.

For his part, Father Carlos Irías, of the Antonio Valdivieso International University, rivas and who on behalf of his order had sent support to URACCAN in the context of Hurricane Eta, again expressed his readiness to continue helping in the context of this recent tragedy (Iota).

From the Central American Black Organization (ONECA), in conjunction with Alianza Américas and CARECEN SF (Central American Resource Center), they are raising funds to contribute to URACCAN's material and moral recovery.

The brothers of the Regional Indigenous Council of Cauca (CRIC) and its Intercultural Indigenous Autonomous University (UAIIN) of Colombia have sent their solidarity samples to this Nicaraguan Caribbean study house.

These pro-URACCAN initiatives, which are expected to continue to join others, are a valuable hope, not only for the university, but for the indigenous peoples and ethnic communities of the Caribbean Coast, who see URACCAN as a home, as their family.

"I take full responsibility. But in order to get it right, I need the support of each of you. We are a family," Rector Hooker concluded, directing her gaze full of faith and optimism to her entire team at the Liaison Office in Managua.