Skip to main content
Lidia Virginia Matus Spears, a URACCAN student who conquered the underwater world of the Caribbean Sea 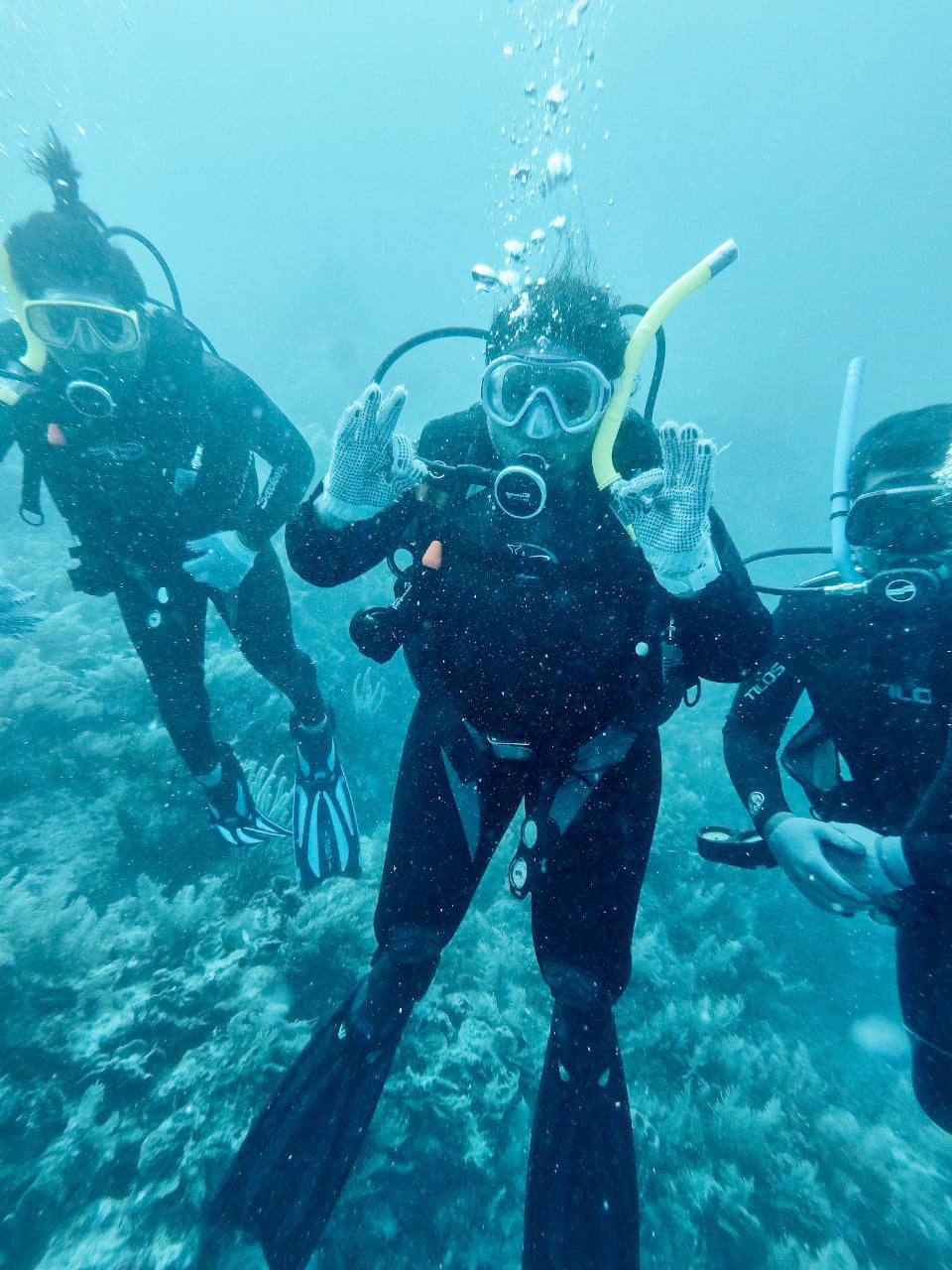 IREMADES trained Lidia, among other topics, in underwater photography, which was relevant at the time of monitoring the reef restoration.

Example of perseverance, self-improvement and motivation

Feeling the sound of water, bobbing, beating the reefs and experiencing the serenity that reigns in the underwater world, was impossible. Although she was always attracted to Marine Biology, Lidia Virginia Matus Spears, 23, couldn't swim. He never imagined he would conquer the depths of the Caribbean Sea. And this was thanks to URACCAN, which, through the Institute of Natural Resources, Environment and Sustainable Development (IREMADES), had the opportunity to study biotic reefs, formed by colorful colonies of stone corals.

With the help of IREMADES, Matus conducted the study "Restoration of coral reefs in the Cayos Miskitus Biological Reserve", which he recently defended in URACCAN Bilwi enclosure, where she obtained her degree in Agroforestry Engineering becoming an excellent professional, committed to the social, cultural, ecological and economic development of the Caribbean Coast of Nicaragua.

"The interest came out when I was invited to a forum (...) IREMADES-URACCAN. The Marcos Williamson master's degree was presenting the theme 'Arrecifal Health Index (ISA) in the coral reefs of the Miskitus Keys'. And the truth, from that moment on, caught my attention quite a bit, I liked the subject and he in his presentation spoke that they as an institution had research topics, where any student who was interested could carry out their subject of study, because they were with open arms to receive them, and that is where I decided," Matus recounted.

The first steps as a diver

"Since much earlier I was struck by Marine Biology. I didn't get the opportunity to study it, but here was a great opportunity," Lidia said strongly, thanking URACCAN for allowing him to complete his university studies very successfully and, above all, because it allowed him to remember one of the most diverse ecosystems on the planet: reefs, whose ecological and cultural importance contributes to the development of ethnic communities that have been able to reduce the shores of the Caribbean Sea.

The initiation into diving, in which other students of URACCAN Bilwi enclosure also participated, taught of two phases: first, they were given training in a virtual and face-to-face way, "we were taught all the regulations, what it was about, how it was done, what steps we had to follow, what should not be done; then, it was like a guide, like a class; then came the practices, which were done directly in the Miskitus Keys," she said.

Clearly, the group of university students who had decided to dely into the depths of the Caribbean Sea had to be given several courses, trainings and instructional guides, to strengthen their knowledge and abilities, and to develop skills in this rare field in the country. The courses were; "'Open water driver', where we were taught the first phase to dive, then came the advanced diving course, we also took out the course of 'Identification of fish and corals' and the last course was 'Underwater Photography', which was very important to do the monitoring of the restoration," Matus said.

Lidia recounted that, at first, the process was quite difficult because it meant attaching to something new. "Over time I managed to learn and overcome all the fears I had, because it was a great challenge for me; because not knowing how to swim and then go to the sea is very difficult, it cost me at first, but with the help of my colleagues, the IREMADES, who were very attentive, friendly, supported me quite a bit and I am very grateful for that," the young engineer narrated with a beautiful smile.

"As time and practices passed, I gradually learned," Lidia Matus continues to recount, adding that what attracted him most to the sea is that "it's a different world, the wonders that the ocean has and that you never finish knowing, it's very nice to see how everything works underwater."

URACCAN, an in-one institution with An Intercultural Gender Perspective

URACCAN, as an intercultural higher education institution, maintains teaching-learning from endogenous and exogenous approaches, where the educational model promotes the use of scientific theory hand in hand with practices in the field; In addition, in its walk in 26 years of foundation it remains as an integral institution with An Intercultural Gender Perspective, where spaces are provided to both women and men, to grow in knowledge, knowledge and practices for the development with identity of the peoples of the Caribbean Coast. Students like Lidia Matus are living examples that URACCAN complies with its institutional philosophy.

Faced with this, Matus said that the university does an excellent job, "as a university they open the doors to students so that they can do their research and thus strengthen their knowledge and do new things, take those initiatives; it's very nice, very motivating for all those students who are still in the race," she said.

Finally, Lidia Matus advises the Caribbean youth to fight for their dreams, "that if they stumble, they will succeed; don't stay there; that they rise up and move on, that they keep fighting, nothing is easy in life, but with effort and dedication everything is achieved and above all put God first."