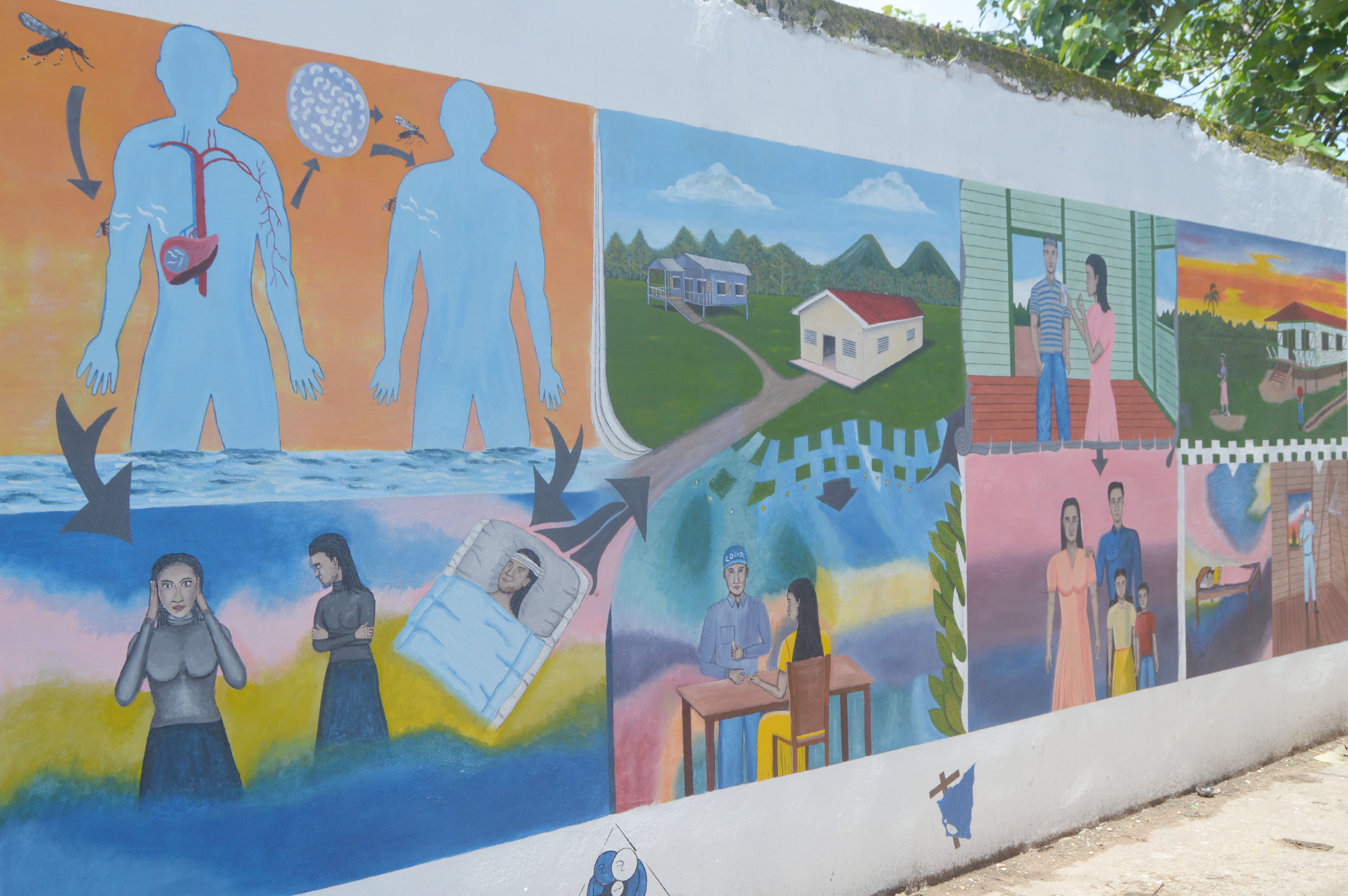 The mural is divided into sections, in sequences of thematically related images.

Within the framework of the project "Nicaragua, all united achieving achievements, consolidating actions focused on the pre-elimination and prevention of malaria", the Institute of Traditional Medicine and Community Development (IMTRADEC-URACCAN) of the Bilwi enclosure, in coordination with the Ministry of Health, Ministry of Health and Fundación San Lucas, painted an illustrative mural to publicize the symptomatology and step by step in the face of the suspicion of malaria.

Teacher Loyda Stamp, IMTRADEC coordinator at the Bilwi compound, explained that the idea of the mural is to reflect step by step the entire transmission cycle, up to the actions that Caribbean families must take in the face of any case of malaria.

"What it reflects is how a person gets malaria, and is specifically focused on giving the message to the population that it is not the stilt that malaria gives, but the parasite that transmits the stilt," Stamp explained.

It should be noted that the mural is divided into sections, in sequences of thematically related images. First you can see the process of when the person feels the symptoms "fever, headache; and where to go, then the recommended sites appear: the health unit, the colvol, places where they should be diagnosed; after that, if the person comes out positive, what they should do, plus the idea is that the person knows that they must comply with all the treatment," she said.

Awareness-raising actions in the population of the Caribbean Coast

Since the beginning of this year 2020, IMTRADEC-URACCAN's coordinations with the Minsa, Ministry of Health and the San Lucas Foundation have carried out an awareness campaign for the entire population of Puerto Cabezas and Waspam with the aim of preventing the spread of malaria, including talks through home visits by health promoters , being made up of students of the SECOND year of Psychology in Multicultural Contexts of the Bilwi enclosure.

In addition, preventive messages are being disseminated through local radios in both Puerto Cabezas and the municipality of Waspam, "on Wednesdays, Thursdays and Fridays at Bilwi Stereo Radio on the Wishta programme, judges are talked about the issue of malaria, aimed more at raising public awareness," said teacher Loyda Stamp.