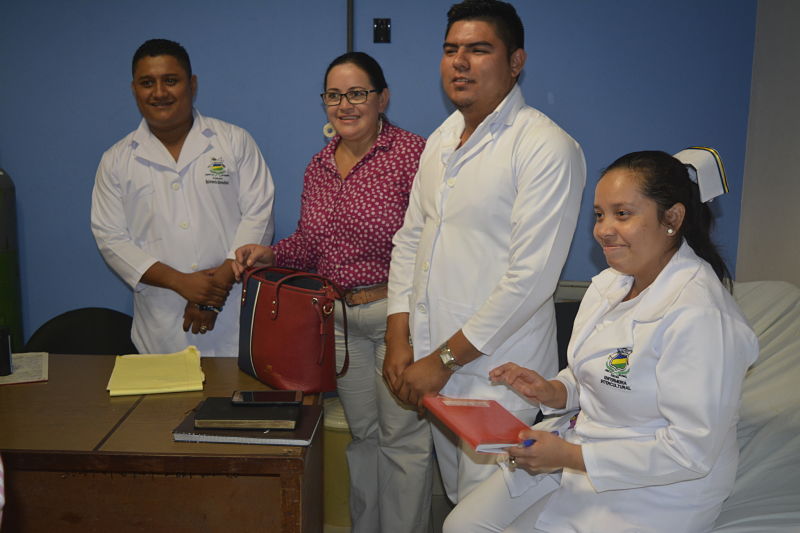 With more than two months outside their territory, performing rotating professionalizing practices between the Silais Chontales, Juigalpa Health Center and Hospital, the young students of intercultural nursing at URACCAN new Guinea, share their experience and appreciation, both to the health system, and to theURACCAN, for making the coordinations that allow them to strengthen their knowledge, through practice.

In this context, Esther Aguinaga, says that "As students we have learned many things, since knowing the management of the Epidemiological Surveillance System in the Silais, municipal reports; at the Health Centers we work vector control, both in token fillings and fieldwork and in the hospital, day-to-day work, monitoring and chlorometry for water quality and waste treatment, among others," he described.

In addition, Aguinaga, who has excelled throughout the race for his passion, obtaining better qualifications and experience of human values in the practices performed, adds that "We have had a lot of work and we are left with a lot of reading that has been very useful to us to have more and better knowledge," he said.

For his part, Sandor Cano Días, shared his satisfaction with professionalizing practices, as he strengthens his knowledge acquired in the classroom and also helps him to put it into practice; referring to that "Time is short for everything you have to learn," he said.

"These practices were very helpful, the three-week rotation in each center was very feasible, since we were shared some of the knowledge that epidemiologists have, the system of work among the Silais is the same, only that not all have the same working conditions," added Cano, who has been part of the health system in the area.

From this perspective, for Dr. Rudy Figueroa, a schedule teacher of the degree in Intercultural Nursing with mention in Epidemiology, accompanying the group of students is part of the commitment that as a university is to the quality of education.

"I think URACCAN did a good management in coordinating with the Silais, because from the administrative side they were given the opportunity to work along with the epidemiologist, they were not taken out of their academic objectives, they were always on the administrative side, they were always on the epidemiological side," Figueroa stressed, adding that "During the internship there were, in all areas , willingness on the part of the group of students and on part of the area managers were always supported by what was a mutual disposition and support," he added.

For his part, Luis Jiménez, director of epidemiology at the Asunción Hospital in Juigalpa, said that "They have been given many tasks, the idea is to strengthen their knowledge by bringing greater tools to the places where they return to always improve the quality in terms of patient care," he said.