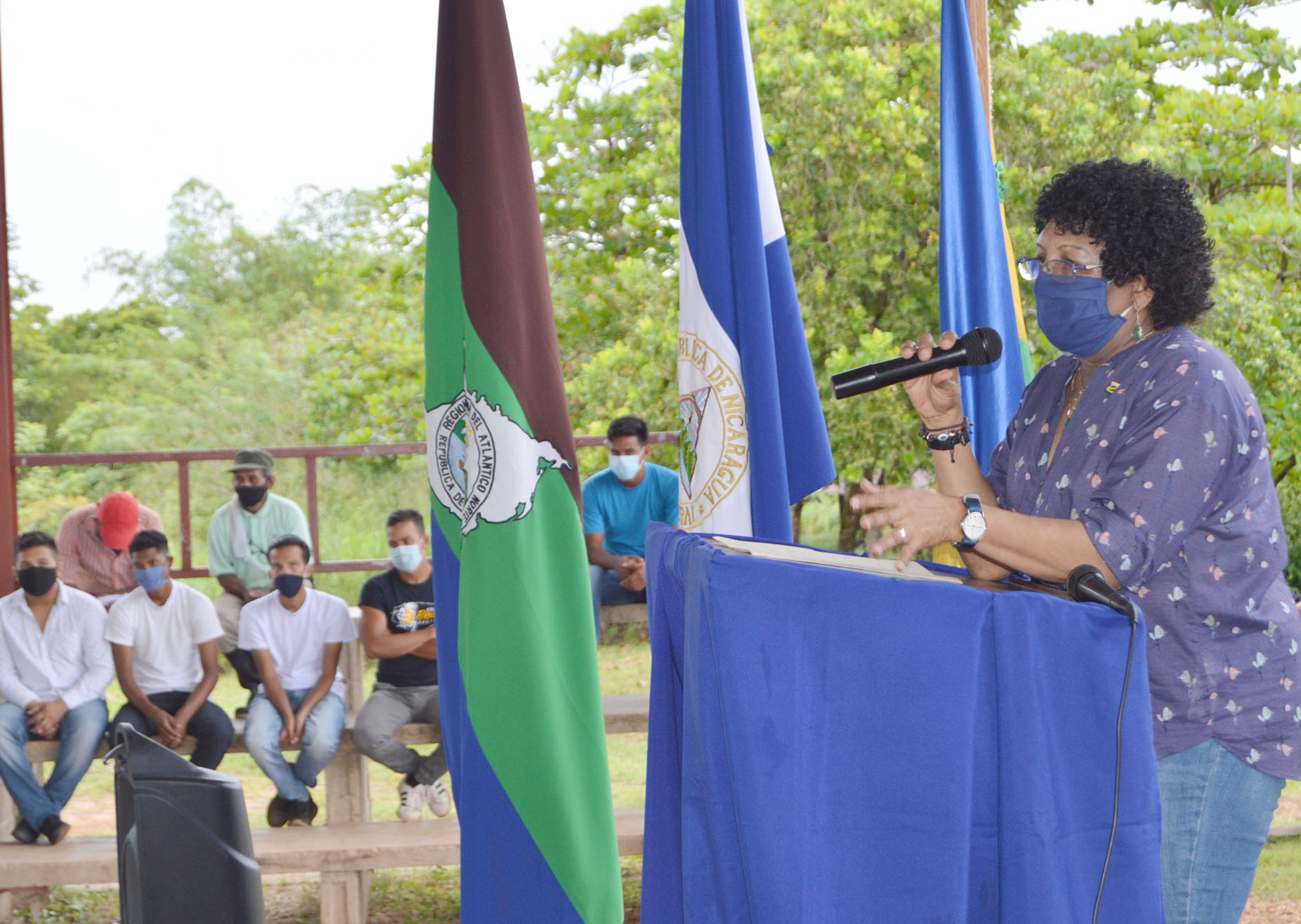 Dr. Hooker analyzed the current pandemic context and explained some URACCAN strategies by 2021.

Higher Education: challenges and challenges in the face of the new context of COVID 19.

Hooker began by giving a brief overview of what URACCAN's evolution has been like from the various spaces that contribute to the formation and development of Nicaragua's Caribbean Coast. The rector emphasized that in Nicaragua education is divided into five subsystems, "primary, secondary, technical, university and the Regional Autonomous Education System (SEAR), one of them, is to which URACCAN responds", she said.

Our Mission and Vision contemplates the professionalization of men and women for the strengthening of Regional Autonomy, he assured during his address. In addition, Hooker recalled that before the Caribbean Coast did not have Higher Education, "our teachers went to Bluefields, they would graduate and then come to teach us, (...); I ended up graduating from Moravo College, I didn't have to go to Bluefields like a lot of Fellows in the North," he said.

Intercultural Community University. The Law of Autonomy is a law of unity

URACCAN identifies as Intercultural Community because they respond to the needs of the population, "then, it has to respond to the needs of the indigenous people, of the Afro-descendant people, to the mestiza population, the Law of Autonomy is a law of unity, it is not a law that gives more rights to one another, it is a law that wants us all and all , and is aimed at the unity of all, each one maintaining his own identity, so URACCAN works hard with strengthening the identity and revitalization of culture, with the cross-cutting axis of interculturality," she said.

In this sense, Dr Hooker stated that the university promotes interculturality as a way of respecting the diversity of peoples, "after we were founded and seeing all that autonomy poses, that all community processes must be accompanied, we must accompany the authorities of the different governments existing in the region, the university , their careers (by the way) the races were discussed and approved extensively in the process with the Association, but if there are the races, how do we reach the communities? (...) then it was decided to open 7 institutes, which accompany the process in communities," he explained.

It should be mentioned that the rector remembered that one of these institutes, was that of Traditional Medicine and Community Development (IMTRADEC), where together with Carlos Alemán they founded this instance, "first of all we knew nothing about universities and fewer institutes, so it was to invent what we were going to do, there we started to see what the Law of Autonomy raises, the law says that health must respond to the reality and need of the population".

Within this framework, URACCAN made a community diagnosis to know the realities and problems of the Caribbean population, "they wanted their own medicine, they wanted their spirituality, they wanted traditional doctors to be at the same level as other doctors, they wanted the health of the community to be attended to there, anyway, all approaches were collected and embodied in the Regional Model of Health" Pointed out.

Feeling the need for the Caribbean population to professionalize in careers relevant to the realities and contexts of the peoples of the Autonomous Regions, URACCAN creates the nursing career with a focus on Epidemiology. "We continued to prepare mental health nurses, nurses in obstetrics, while at the same time we continued to work with traditional doctors, we worked HIV/AIDS, here we marched every December 01, to try to break the HIV and AIDS taboo, but at the same time we did the intercultural health fairs in morava Church park (...) Amazing! We started making these exchanges between traditional doctors with Westerners in the courtyard of the Morava Church," she said.

Current context of the Covid-19 pandemic

Hooker recalled that in the first months of this year 2020, he met with the coordinators of the Territorial Governments to discuss the health situation that was occurring and affecting the population worldwide, asking them what they would do if the disease reached communities, all responded that they were organized to care for the Covid, "but, also, the health system had already activated the Community Health Network , where community leaders were, traditional doctors, healers, then, among all and all in that network with traditional knowledge, the Covid was attended," he emphasized.

Also, through the signal of the Intercultural Community Channel, channel 5 of URACCAN in Bilwi, a space was opened so that the doctor of the New Dawn Hospital could inform relatives of patients with Covid that it was free to bring them their tea, so that even if the sick person did not have the opportunity to see them, through that traditional medicine they felt that their relatives were close to them and they , because his spirituality was reflected, highlighted the rector of the university.

"The Covid must face it all, we have to do what we are doing now, making use of our masks, although we do not see it, even if the hospitals are not full, we have to protect ourselves, because if you protect yourself and protect your partner who is by your side, then the Covid, whether or not we want it endemic, the health authorities have said , it means that it can walk anywhere, we have to have chlorine, we have to wash our hands, we have to disinfect ourselves," Hooker stressed.

Finally, Dr Hooker mentioned that since college there have been meetings with the Ministry of Education and the coordination of the Regional Government in order to maintain good student recruitment, both in primary, secondary and higher education.

"There were many high school kids who didn't have access to continue their classes (...). URACCAN mobilized its Mathematics teachers and its Language and Literature teachers, some went to Siuna and some went to New Guinea and designed special modules for those students, that means that those students who are going to enter now in 2021 come up with a curriculum that will have the high school thing and prepare them for college (...) they will see a one-month propedeutic but then we enter a common semester - no one is going to postpone in propedeutics - but it's a diagnosis so that the university knows under what conditions these students come from," she concluded.