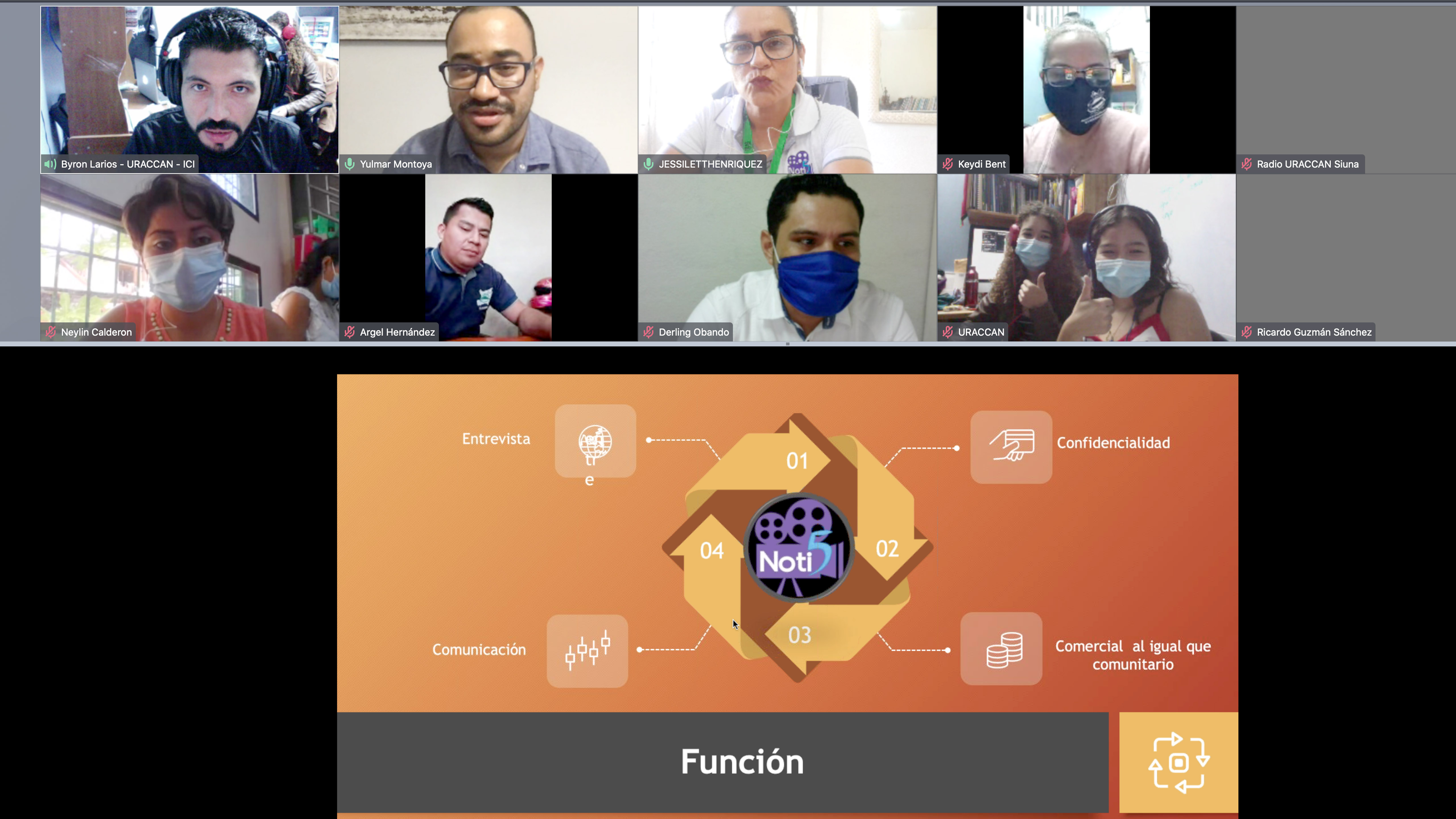 This academic activity was very nurtured and, because of the great interest it aroused, fostered open dialogue between the participants.

Henríquez: "For an intercultural communicator, the most important thing is to be able to respond and help the neediest."

"Coverage and publication of information from the focus of intercultural communication in Bluefields: the case of News" was titled the webinar provided by the director and founder of this information medium, MSc. Jessilett Henríquez, who in addition to being a renowned communicator of the municipality, collaborates unconditionally with URACCAN. For this reason, from the Institute of Intercultural Communication (ICI) and within the framework of the UNESCO Chair, she was invited to share her experience at the head of this space that promotes the development with identity of the peoples of the Caribbean Coast.

This nutritious exchange experience commemorates URACCAN's 26th Anniversary and 33 years of Regional Autonomy. According to its director, Noticinco Bluefields is an information space that was broadcast for 5 years, on Channel 5 of the city of that city, with the purpose of influencing and somehow accompanying the public in the solution of their needs.Currently, it is broadcast via YOUTUBE, on the channel of "Jessilett Henríquez Sotelo" and through Facebook.

Henríquez began by assaulting URACCAN for having formed it in values, but also, and especially, for transmitting a love of interculturality to it. For the director of Noticinco, only in URACCAN there is this concept as a cross-cutting axis of its educational processes, which is of particular importance in the context of the Caribbean Coast, where the exercise of communication becomes vital in the visibility of the history, culture, languages and traditions of ethnic communities, as well as in the defense and promotion of their rights.

According to Henríquez, interculturality represents a human and social commitment that derives in the responsibility of the communicative exercise. Hence the coverage and treatment of information in Noticnco are oriented towards the respect and understanding of indigenous peoples, Afro-descendants and half-breeds, guaranteeing them equal dialogical conditions and a space where they can exercise their citizens' rights for the sake of their own development. At this point he emphasized how Law No. 28, Statute of Autonomy, has influenced this context and opened up new opportunities to build intercultural citizenship without biases of discrimination, exclusion or racism.

For Henríquez, communications must be exercised in ac regard to the cultural particularities of people. Newscast, for example, develops interviews and other processes based on people's characteristics, opening themselves to their expressive abilities: their mother tongues, their rights to appear in front of the cameras if they wish, their worldviews and beliefs.

From Noticinco, and thanks to the identification that the people of Bluefields have with this medium, community services are provided and campaigns are promoted that contribute to the Good Living, Live Well and Dignity of the original peoples. This explains the constant growth that this media has had, which has crossed national borders and reached: Spain, United States, Mexico, Grand Cayman, Panama, Guatemala, Honduras and Costa Rica.

"It cannot be forgotten that our spaces must pay, not only to inform, but also to educate, entertain and help large and young. From this platform we have continued to support with intercultural communication, as we have served as a bridge for our ethnic and Afro-descendant peoples and communities on Nicaragua's Caribbean Coast," Henríquez concluded.
Tags
Bluefiels
Noticinco
ICI
Cátedra UNESCO
Previous
Next
sfy39587stp16