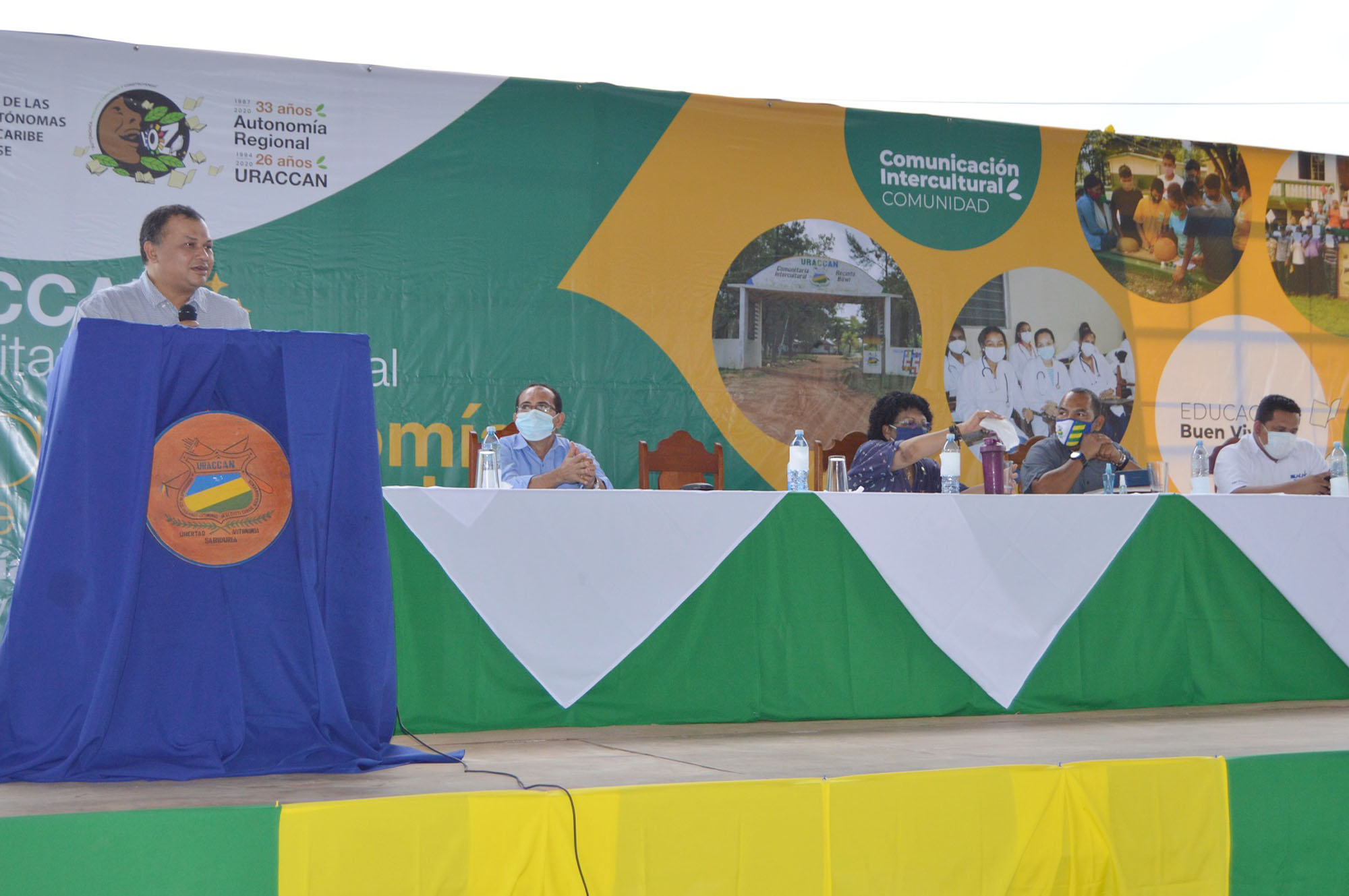 The coordinator of the Autonomous Regional Government of the North Caribbean Coast, MSc. Carlos Alemán.

The MSc. Carlos Alemán, coordinator of the Autonomous Regional Government of the North Caribbean Coast (GRACCN), during his speech at the inaugural event of the 26 years of URACCAN and 33 of the Regional Autonomy that took place in the Bilwi campus, said that the contributions that the university has made to the regional process have been significant for the development of the Caribbean peoples.

German began its conference by released that, in these 33 years, the Autonomous Regions have been taken into account, not only at the national level, but are recognized both in Latin America and in the world, "in legal terms, in institutional terms, in terms of public investment, in terms of human resources formed by the effort made here by URACCAN".

In this context, the government coordinator emphasized the history of why the Autonomy Act was born, why globally Nicaragua was known as the 'Land of Lakes and Volcanoes', however, the Caribbean Coast, is beaches, sea, German said, adding that, "that's why when the new constitution was made in the year 87 , it was established that Nicaragua is not half-breed, not Catholic, Nicaragua is multi-ethnic, multicultural and that all religions and all ethnicities have the same rights in terms of participation."

In turn, Carlos Alemán explained that, since then, the Caribbean population has struggled to obtain a better quality of life for peoples and communities, who feel that they have the same conditions in access to services, "there are countless indicators that measure us, as we have invested in these indicators, we are reducing what we call indicators of poverty , that we have access to communication, that we have production capabilities, that we contribute more to the economy," he said.

Also, the representative of the government, stated that it was now in the North Caribbean that it was easy to talk about the progress that had been made since the state's efforts, he also mentioned that Caribbean populations were different, "We are not special, we are different, we are miskitus, we are Afro-descendants, we are Mayangnas, we are half-breeds born on the Coast (...) we are all Nicaraguans, so we want to be recognized for that diversity."

On this subject, German highlighted the role that URACCAN plays in teaching the history classes of Nicaragua's Caribbean Coast, because it is of great importance that young people know about these historical elements, because they give them an added value of appropriation to their own culture, diversity, traditions and worldviews, "there is a traditional knowledge that we also want to apply it , which is just us, we need to know him, we need to know." In addition, it specified that there was still a long way to go to investigate in terms of education and the preservation of natural resources.

Constructions that enrich the cultural, autonomous and economic visibility of the Autonomous Regions

Commitments to further deepen regional processes do not depend on the populations of the Caribbean Coast, but also depend, on the effort made from government authorities, on focusing public policies that are including and that contribute to the walk proper to cultural revitalization, "in the first stage of the revolution the Autonomy Act was paced Then we lived through 16 years of neoliberalism, where the campaign was to dismantle this process that had been born of revolution," he said.

According to the coordinator, the investments made are focused on infrastructure, social and financial development, which mentioned some of the main projects that have benefited the Autonomous Regions: "the road to Bluefields, the road to Laguna de Perlas, the road to Kukra Hill, the road that comes by Waslala, the road that comes to Siuna, right now to Sahsa, will now be delivered the stretches of Sahsa to Nazareth , from Nazareth to Bethany, from Bethany to Bilwi, plus the Wawa River Bridge, the road that will bring Rosita together with Bonanza with hydraulic concrete, that's only on roads," he said.

As these hydraulic concrete roads advance in the municipalities of the Caribbean Coast, the increase in the economy has become noticeable, "The Caribbean today, thanks to these roads, we have become major producers of basic grains, meat, dairy; Nicaragua, more than Chontales, more than Matagalpa, and that's because there are roads, there is energy," he said.

Before completing his speech, German Cunningham recalled when the Pro-URACCAN Association called young people to be part of it, "now URACCAN has formed more than 9,000 people, we didn't have that before and possibly a lot of the mistakes that were made in the past, it's because we didn't have the human resources formed here on the Coast," he said.

It is only with the unification of work between state institutions, territorial governments, production systems, that progress can be made in this regional process, which is why the coordinator of the Regional Government mentioned one of the main challenges facing both the URACCAN and the regional authorities.

"We were with the rector 15 days ago with all the rectors of public universities making a joint presentation of the two Regional Governments and URACCAN, to see how we do come together where knowledge occurs with the efforts of regional governments, how we improve the process of training and accessibility to all students who graduate from all high schools , we were even arguing there that if we're going to have the hospital, how we're going to have the specialties we need to work once the hospital is ready here in Bilwi, the hospital in Siuna and that's only if we work coordinated, we get something interesting, 10% of the medical specialties are going to do for costa students , so that they can access health specialties," German concluded.