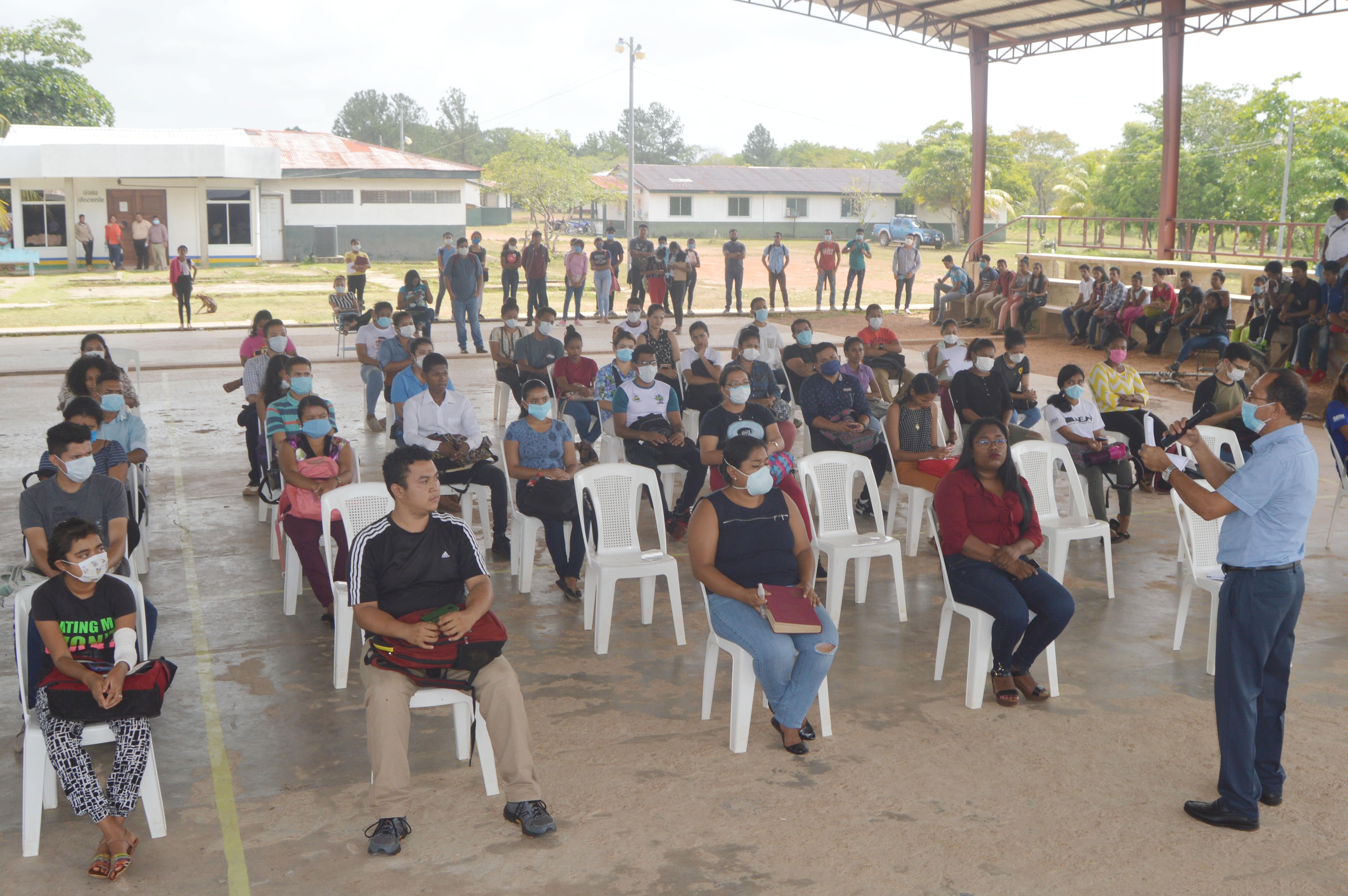 Students of URACCAN Bilwi enclosure during the briefing on new schedules.

The authorities of URACCAN Bilwi venue held assemblies with the teaching guild and with the student community to report on the new schedules established to attend the different races in modality by meeting, depending on the official communication issued by Rectory for the safety of the university community.

Preventive measures being taken as a university, mandated by the rector, Dr. Alta Hooker, include physical estating, the placement of new sinks, alcohol dispensers and chlorine pediluvios, so that the entire university community has access to protect themselves during their stay on the university campus.

The vice-chancellor of the Bilwi compound, PhD Enrique Cordón, stated to the student that the measures that are taken to protect the life and health of each of its members. Cordón urged the student community to compulsory use of masks, hand washing, proper use of gel alcohol dispensers and pediluvios placed at strategic points on campus. "From now on much of the classes, subjects and training processes are going to be virtually, which means that we must learn to use these new technologies," the vice-chancellor said.

In addition, teacher Ivonne McLean, the academic secretary of the venue, said that as part of the fulfillment of the guidance given by the rector of URACCAN, the classes continue under the modality by meeting. "This means that we will be once a week in person and the rest of the academic activity will be on the virtual platform as an official medium and tool of the university," McLean said.

Other measures implemented in the Bilwi compound

According to teacher Ivonne McLean, precautions have been taken on the premises to ensure the health of her students, officials and civil servants, including the reallocation of larger spaces for the placement of large student groups, "where they exceed 30 or 35 students to maintain estating, we have been raising awareness among students in taking each of the measures" , detailed the academic.

In addition, in the boarding school area, the spaces where the student has the most accessibility of estating have been readjusted, "before we had about four students in each room; so, as part of the estating measures, we've left two students in each room so that they can respect that part," McLean explained.

It is important to mention that, among the sporting events currently running was the Volleyball League. On this, Rubel Chamorro, general executive of UNEN-URACCAN, said that from now on the matches are canceled. "We as a student movement are taking other internal measures that benefit students; for example, we are suspending all sports activities within the institution," Chamorro said.

Schedules set per race from the Bilwi venue

All day must be presented to the venue as follows: the first year, on Mondays; second year the Mars;, third year, on Wednesdays; and fourth year on Thursdays.

First-year students must attend face-to-face classes on Monday mornings, while in the afternoon, second year will attend Mondays and the third year on Tuesdays.

The only existing group is the second year, which will be presented on Friday afternoon.

All day: Tuesday, the 2nd year; the third year on Wednesdays; and fourth year on Thursdays.

They will receive classes on Tuesdays and Thursdays.

Sociology with mention in Autonomy will receive classes on June 13, June 27 and July 4.