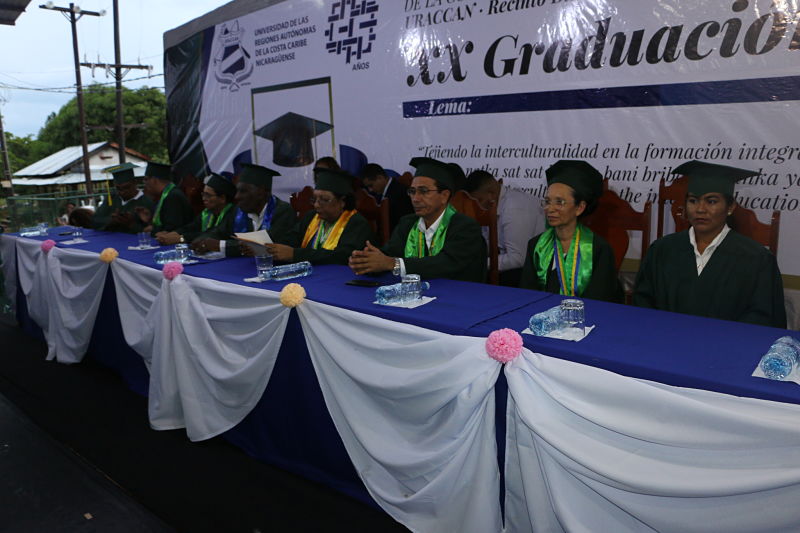 URACCAN, in its Bilwi university campus, delivered 232 new professionals to the Caribbean Coast, who will contribute new knowledge to the development of the regional project, to the indigenous, Afro-descendant and mixed-race communities and peoples of Nicaragua.

During this twentieth graduation at the Bilwi campus, representatives of the Polytechnic University of Nicaragua (Upoli), the coordinator of the Regional Government of the North Caribbean Coast (Graccn), Bluefields Ecumenical Choir, authorities and university community of URACCAN, participated, who joyfully celebrated the birth of new professionals from the Autonomous Regions.

Under the motto "Weaving interculturality in integral training with peoples", students thanked the university's teachers for their dedication and sharing of knowledge, for transferring wisdom, experiences "And for preparing academically at this stage of our lives," exhibited the best student of the Master's Degree in Public Administration and Local Development, Flor Green Chow.

During the ceremony, the central words were in charge of the Msc. Carlos Alemán, coordinator of the Regional Government of the North Caribbean Coast (Graccn), creating that the delivery of these new professionals is a sign of URACCAN's commitment to compliance with the Autonomy Act "If we grab some things to measure what we had before with what we have now, the best example is here, right now at URACCAN", emphasized.

"When the Autonomy Act was made in 87, these facilities were the facilities of the Seventh military region of the Nicaraguan Army, if we have changed, if we have made progress in Autonomy, as we are at this time doing the twentieth graduation of students (...) yes we have changed, we have been transforming the region," master Carlos Alemán stressed.

In addition, German referred to the substantial progress that has been made with the training of professionals committed to the development of the region, detailing that this training shows that URACCAN has complied with what the Autonomy Act demands, professionalizing more than 9,000 students and currently around 7,000 in classrooms " "That 30 years ago were a little bit of people who were at least looking to have access to universities and were not universities here, they were from outside our region, today they were proud to see that more than nine thousand people have passed through URACCAN classrooms and are in the diversity of spaces, in communities and in all municipalities , it was something we couldn't even think of," German concluded.