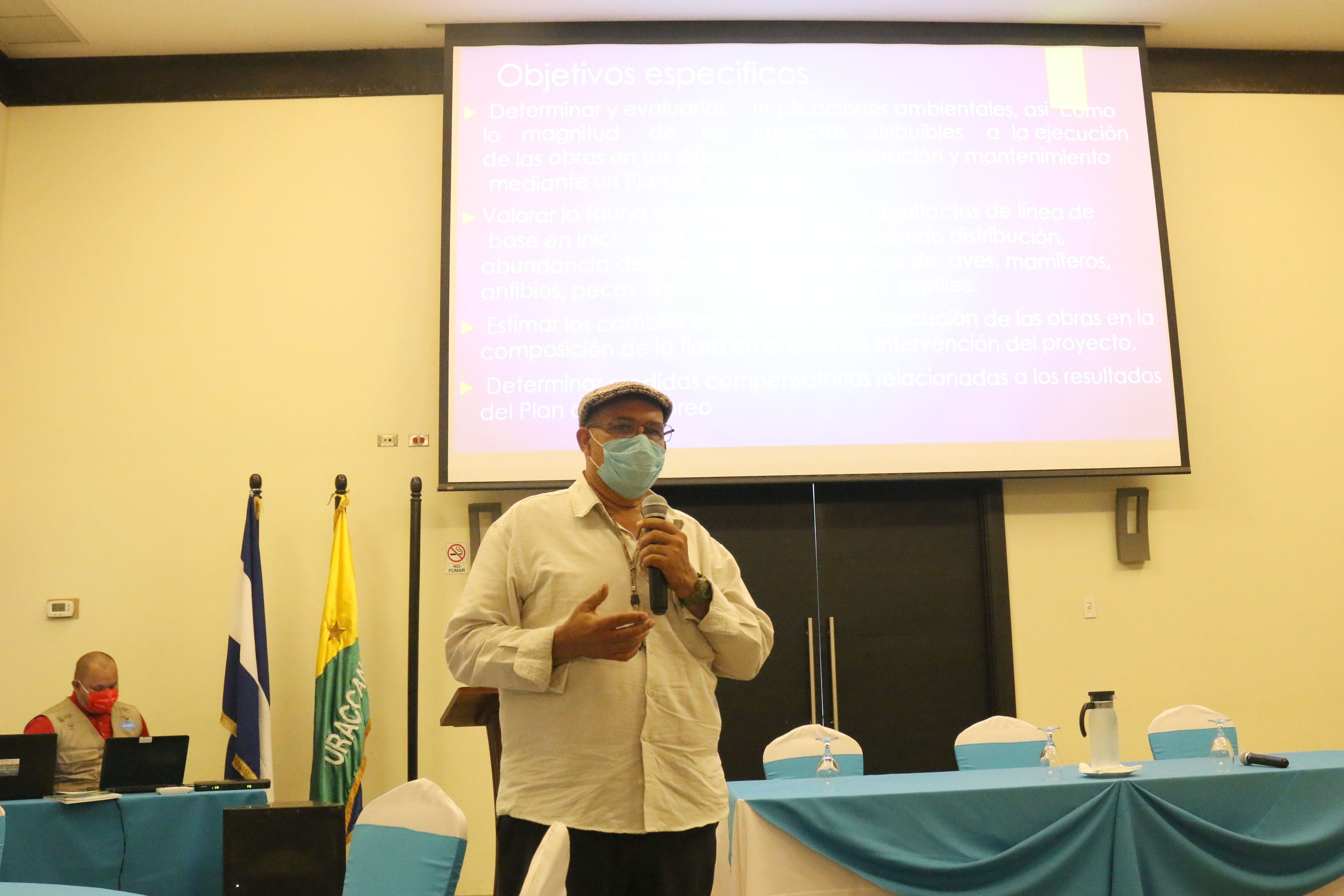 Msc. Marcos Williamson, director of IREMADES, during his academic-scientific lecture.

Thanks to URACCAN's research, countervailing measures have been established to protect the biodiversity of the area.

This Friday, October 23rd, the Institute of Natural Resources, Environment and Sustainable Development (IREMADES) of URACCAN, in conjunction with the Nicaraguan Health Aqueducts and Sewerage Company (ENACAL), provided a workshop in Managua on the progress of the Flora and Fauna Monitoring Plan, for the care and protection of the environmental environment in the indigenous miskitus territories of Bilwi , Puerto Cabezas, where a drinking water project was carried out and specifically in the Likus River basin.

The words of welcome were in charge of the MA. Yuri Zapata Webb, vice-chancellor general of this institution, who on behalf of Dr. Alta Hooker, emphasized URACCAN's commitment to improving the living conditions of the peoples of the Caribbean Coast, through his approach to intercultural community management. Through this project, according to the teacher, URACCAN strengthens the capacities of communities to preserve and manage their natural resources.

Hence, the exhibitions of the IREMADES team, chaired by the MSc. Marcos Williamson, have focused on the findings of his scientific research and then make a series of recommendations to ENACAL, with their respective compensatory measures, since during the construction phase, as well as in the phase of operation and maintenance of the project, the environmental impact is inevitable.

According to the honorable academic Marcos Williamson, more than projects, URACCAN works processes, as a process is integral and has levels of positive advocacy before, during and after, accompanying communities and strengthening their capacities for the use and management of their resources, thus attending to the Institutional Mission and Vision, but also ensuring compliance with the Statute of Autonomy and the Community Property Regime.

As part of this process of community accompaniment, URACCAN, through IREMADES, promoted workshops, training and a diploma with young people and territorial leaders, thus taking into account the measure of prior, free and informed knowledge stipulated in ILO Convention 169 (International Labour Organization), to which our country is attached. In addition, it has developed a plan of visibility and communication that reaches the whole city and its communities.

This interinstitutional collaborative work has been carried out since 2018. Research submitted by IREMADES specialists has a comparative approach to the Environmental Impact Study conducted in 2014 by a foreign company, but which, in view of its commitment to ensuring the rights of indigenous, Afro-descendant and mixed-race peoples, promoted URACCAN through a collaboration agreement with ENACAL, to analyze the feasibility of the project based on the worldview of ethnic communities living in the territory , specifically those of: Wangki Twi Tasba Raya, Twi Yahbra, Tawira and Karata.

According to the MSc. Lenín Green, IREMADES technician, all this effort responds to the construction of knowledge for the sustainability of the Likus River inter-basin. At this point, URACCAN has pedagogically mediated so that the content developed with the Community responds to its cultural identity and needs, in order to ensure the protection of the water resource to be captured and treated for the capacity and human consumption, positively affecting the health of the population of Bilwi.

Scientific studies covered fish and macroinvertebrates in the project's area of incidence, as well as ornitofauna and herpetofauna (birds, amphibians and reptiles), and mastofauna (mammals). It is important to clarify that, when this project progresses to its second phase (operation and maintenance), the monitoring plan will also be continued, as the operation of the machines used in the treatment plant could cause noise pollution or have any impact on the presence of endemic and migratory fauna in this miskito territory.