Skip to main content
URACCAN participates in the television program "University for Peace", an initiative of the National Council of University 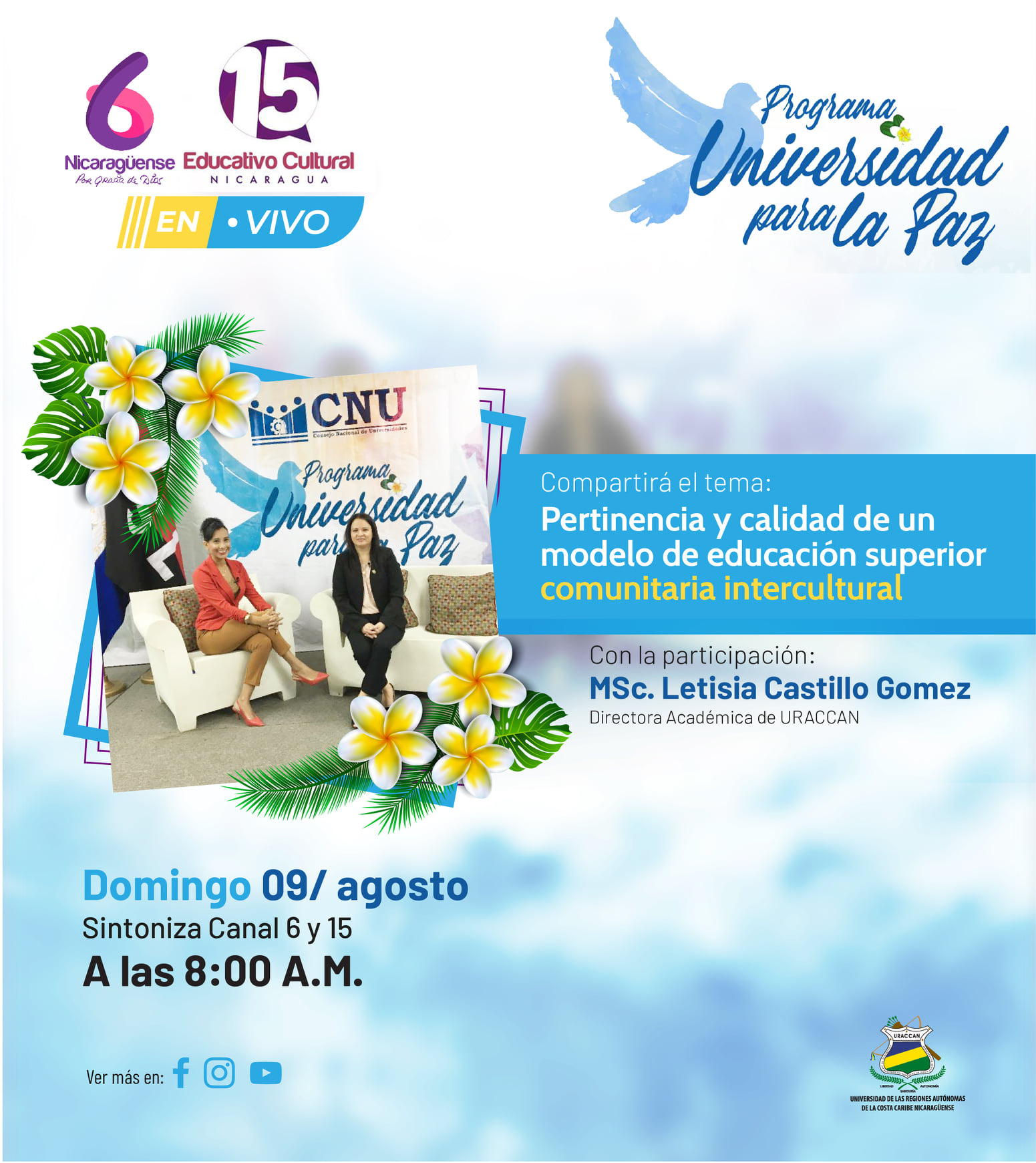 URACCAN, through the Ceo, MSc. Letisia Castillo participated in the television program Universidad para la Paz, of the National Council of Universities (UNC), where he presented the theme "Relevance and quality of Intercultural Community Higher Education in Nicaragua and Latin America".

Intercultural relations, the academic director states, constitute processes of dialogue and consensus between the university and indigenous, Afro-descendant and mestiza communities, so that there is social equity, recognition of rights and equal opportunities.

In this sense, Master Castillo, citing Nicaragua's Political Constitution, emphasized the multilingual, multi-ethnic and multicultural character of this country. In doing so, he emphasized URACCAN's efforts to revitalize the cultures and languages that coexist on the Caribbean Coast. Among the achievements mentioned by the specialist, it highlights the creation of dictionaries of the Miskita, Mayangna language, among other original language teaching texts, from the Institute of Linguistic Promotion and Research and Cultural Rescue (IPILC) and other institutes and institutional research centers.

UnC programme presenter MSc. María José Aburto, who is also director of unan-Managua's Outreach area, asked teacher Castillo about the university's role in countering, from education, the cultural stereotypes that survive in the country.

The academic director of URACCAN underscored her response in the Intercultural Community University Model, which claims the historical struggle of the peoples of the Caribbean Coast. Hence URACCAN is an area of coexistence and tolerance, which promotes identity, human rights and Caribbean pride among its students.

Our teachers, teacher Castillo explained, are prepared to educate by attending to diversity, without doing whitening, understanding that our students learn at different rates and that they come from different cultural matrices, reconciling what they are taught in college with what they learned in their communities of origin.

Thus, based on its educational model, URACCAN has established direct links with communities, understanding them as living spaces of learning, reference, consultation, accompaniment. That is why this institution promotes dialogues and consensus with the leaders of the territory, making the dreams, aspirations and realities of the peoples come true.

From its different institutes and research centers, URACCAN articulates development processes with identity, promoting projects of community interest, in education, communication, health, environment, natural resources, history, culture, among many others.

The educational relevance of URACCAN, according to its academic director, is based on the life plans of communities, in the promotion of intercultural gender citizenships. For this reason, the Regional Governments of the Caribbean Coast have called URACCAN, "the legitimate daughter of Regional Autonomy!".