Skip to main content
Rodriguez Sinclair: guide and protector of the branch people 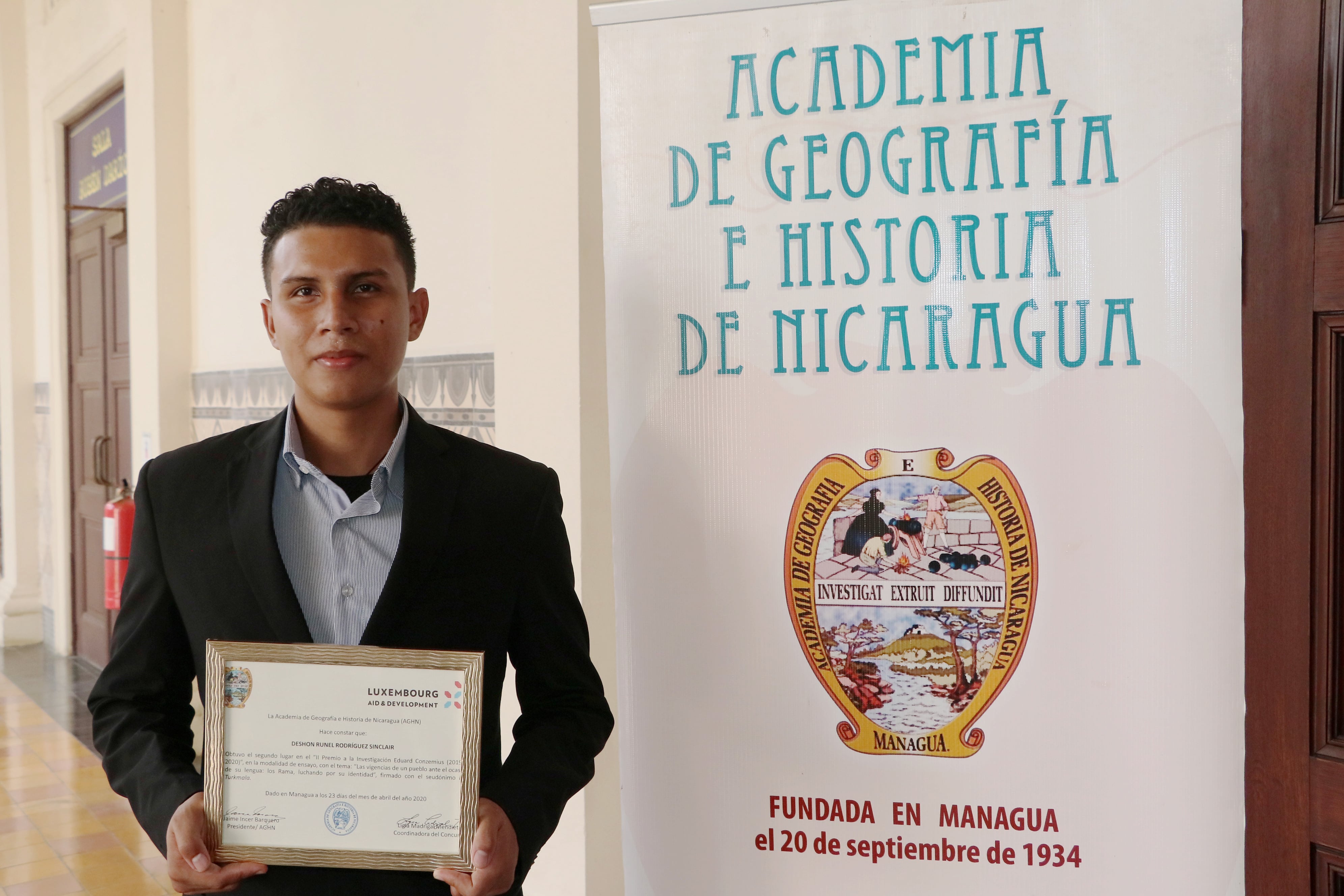 The young computer scientist of URACCAN, Deshon Rodríguez Sinclair, at the Academy of Geography and History, located in the National Palace of Culture.

1. The peace of family voices

On the hot noon of April 23, Rodríguez Sinclair looked pensive in front of the National Palace of Culture, eagerly awaiting 1:00 p.m. to enter the headquarters of the Academy of Geography and History of Nicaragua (AGH), where he would receive the Eduard Conzemius Research Award.

"I'm nervous, " he said. And then he returned to his silence. He walked from one end to the other under the triangular pediment of the neoclassical building. His cell phone rang again and again: his teachers and colleagues at URACCAN at Bluefields were already aware of the great news and longed to congratulate him. Then he alternated, after each call, the creole, Spanish and English.

And only as he listened to the familiar voices did he feel calmer and more accompanied, as if the well-deserved congratulations he received brought with him a fresh and comforting air.

2. Rodríguez Sinclair: "This award I dedicate to my university URACCAN"

The award ceremony started on time, with a strict number of people: out of three winners, each could only take one companion. And Deshon Rodríguez Sinclair traveled 383 kilometers from Bluefields to Managua.

Deshon was sure of the value of his work, that through him he paid tribute to the branch people, to their unequal struggle for the survival of their language, of their culture. He knew he was there because his research was valuable, because he not only represented himself, but also the branch ethnic group, his mother and his father, his URACCAN university.

Without so much ceremony, given the situation in health by COVID-19, the UNAN-Managua teacher and AGH number member, Msc. Ligia Madrigal Mendieta, gave the words of welcome and congratulations to the three winners, with Deshon being the only one originally from the Caribbean Coast.

Then, the secretary of the AGH, Dr. Jorge Eduardo Arellano, read the basis of the contest and particularly praised Deshon because his research essay was "well documented and had included numerous ethnographic sources and interviews, thus recovering the orality and historical memory of his ancestors".

In addition, the academic added, "pays homage to the magisterium of Professor Nora Rigby, who is the main diffuser of culture and the branch language."

Then the young computer scientist of URACCAN, happy and proud, responded with this brief but vehement speech:

"My goal was to hear the voices of a people who are fighting for their identity, a people who despite being one of the indigenous ethnic groups of the Caribbean Coast is the least known and there are few records of it. However, I am happy to be able to make my contribution, hoping that someone in the future will read my essay and fall in love with that ethnicity, be interested in that ethnicity, who has a genuine interest like the one I had when researching the branches. I am very happy that it has been heard, very happy that my essay has been valued. Thank you very much to the Academy for promoting the field and discipline of research in young people. I would also like to thank the Luxembourg Embassy for promoting Nicaraguan formation.

I dedicate this award to my URACCAN University, which supported me very much. Many congratulations also to the other winners."

Deshon's essay is titled "Sociocultural Lifetimes of a People in the Twilight of Their Language: The Branches, Fighting for Their Identity".

To participate in the Eduard Conzemius competition, Deshon used the pseudonym "El Turkmala", which comes from the branch language. The Turkmala is a kind of indigenous priest, with supernatural powers, who guides and protects his people.

Rodríguez Sinclair offers this research to the branch people, to guide them towards hope and protect them from all threats of extinction of their language and culture. The Turkmala, according to this charismatic young man, is also a healer. And he himself feels the profound need to heal the wounds of the indigenous branches, those wounds that have not healed for centuries.

However, in his valuable research, Rodríguez Sinclair appeals to the strength of the branch people, which he defines as an "inspiring example of resistance". This ethnic group continues to struggle to jealously care for its cultural heritage, even though it is the smallest in the Caribbean, as it barely reaches "the o.5% of the population of the two Autonomous Regions".

The branch people have survived difficult processes of identity transformation, because of the closeness to Bluefields and its strong influence; for the Moravian missions that condemned their culture and whose language they pejoratively called "the tongue of the tiger".

But despite all this, this young Turkmala says, the branches continue to resist through their gastronomy, their legends and beliefs, their way of life and subsistence. In this sense, he thanks Miss Nora Rigby, who struggled to revitalize the branch language and for whom today there is a state project to revitalize it, although there is still "much to be asked and many unanswered questions regarding the origin of the branches", for the lack of historical records.

The only historical record of the branches is their language, their strong oral culture. Hence the commendable magisterium of Miss Nora Rigby, whose name features the URACCAN library in Bluefields.

This young Turkmala also speaks with respect to his elders throughout his research, for for he is sacred to the word of the ancestors. For this reason he also resorted to interviewing them, leaving an important record of their beliefs and legends, which recount the branch people's journeys through the jungle, sea and river navigations of natural and mythical beings, gestations of heroic characters fighting in defense of the territory. These stories define a people, strengthen their culture and social value.

4. "It was time to stop and listen with serenity"

This research process, says Rodríguez Sinclair, began in November 2019, "when the Academy of Geography and History came to invite us to participate in the contest." At first, Deshon took it as a challenge to prove that someone from URACCAN Administrative Informatics can also be excellent at research and writing.

That afternoon, after a modest toast and restless to the young Caribbean who had aroused his academic interest, AGH Secretary Dr. Arellano asked him head-on, "When members of the branch ethnic group arrive in Bluefields, are visible, recognizable?"

Deshon Rodríguez Sinclair appeared to transform and responded in a deep voice:

-"Before doing this test I would not have been able to identify them. I had two teachers who were of that ethnicity and I didn't know it. Even one of them was my friend. He knew only the generalities of the branches, what anyone in Bluefields can know, without imagining how deeply in love he would end up in this town.

Being so little what is known about the branches (seen on the bluefields pier, which come from Ramaki Island) and without dwelling exclusively with the description of Conzemius, who described them in stature of less than 1.70, of brown skin and straightened hair, I found in that void an important space to explore and decided to undertake my research.

At first I wanted to do it all quickly, finish even sooner, like when exams at URACCAN and we want to be the first to deliver. However, as I delved into branch spirituality, I learned to endure things calmly, to give myself the time to interpret information and reality.

There were two important factors that stopped me from reflecting. One is academic in type, because at URACCAN, where I have grown up in all the ways and where I have felt projected, I learned to use the APA methodology. And one of the foundations of the Conzemuis contest required us to use the Chicago methodology, which was totally unknown to me. Then I started researching this methodology and my URACCAN teachers helped me apply it throughout the trial.

The other, and even more transcendent, were the conversations that emerged from there with my URACCAN teachers who were of that ethnic group and the interviews I did with Don Basilio Benjamins. To my surprise, one of these teachers, Selvano Hudgson, had studied with my mom when I was young, in high school. And the other, Valerio Solano, was a student of Miss Nora Rigby when she taught branch classes at Rama Kay Elementary School and whose legacy fills him with pride.

Then, through them and all the documentation I patiently reviewed, I began to hear the ancestral voices of an entire people. And I felt in my heart that it was time to stop and listen with serenity.

I realized that the story of the strong and courageous branch people does not fit in a few pages nor is it collected in a few months, even in several volumes or in many years. That is why I hope that my contribution will be useful for future research, to continue this legacy of Miss Nora Rigby and my university URACCAN, and that other young people will fall in love as genuinely as I fell in love with the branch people.

Only in this way was I aware that I am, with my essay, a means through which the branch ethnic group tells the story of their struggle, the struggle for their identity and the rescue of their language."