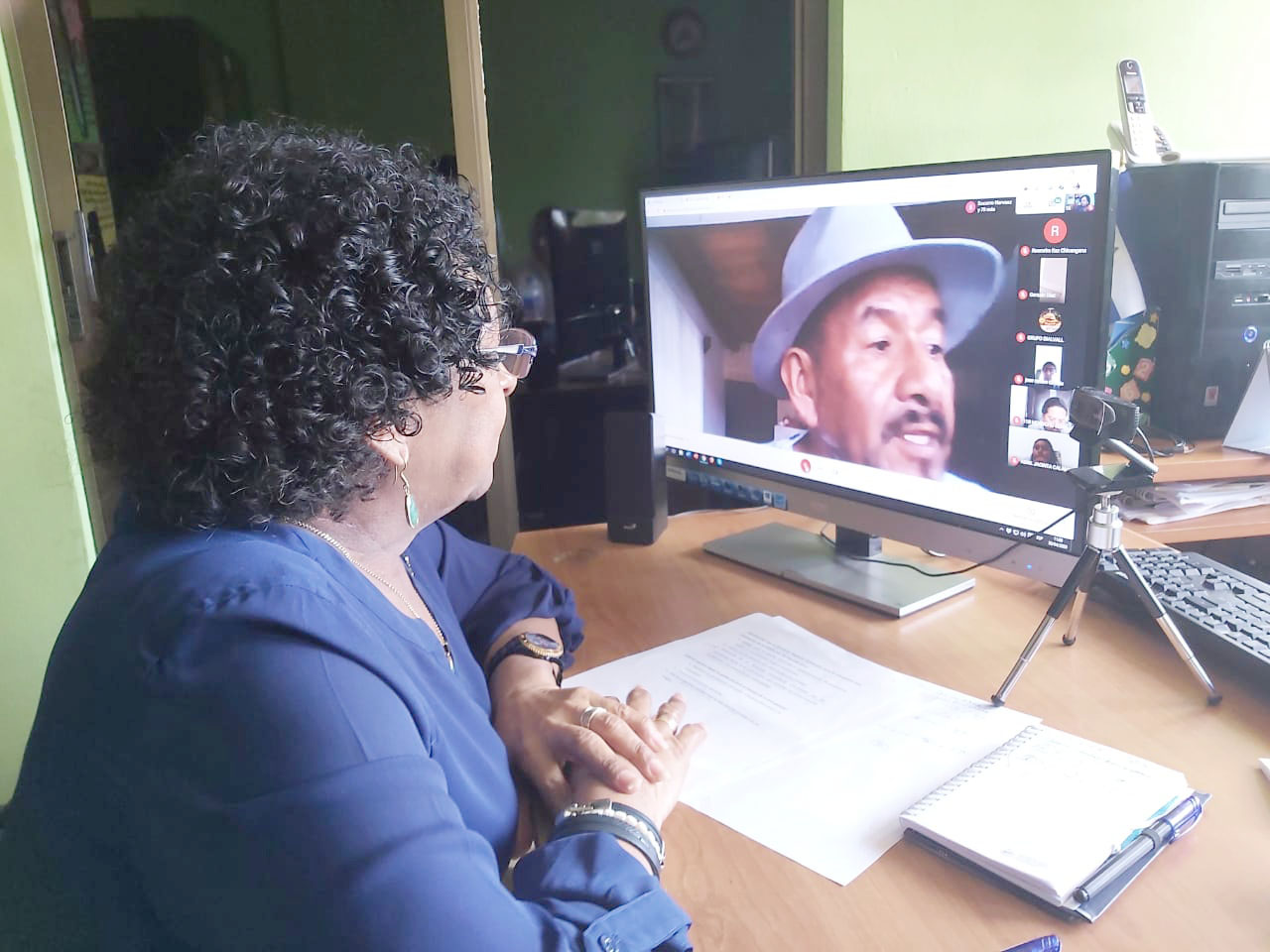 Reflecting on the current status of indigenous and Afro-descendant peoples

The rector of URACCAN, Dr. Alta Hooker, participated this morning as a panelist in the third international conversation, entitled "The work of indigenous peoples in the context of the health emergency", which was promoted by the Autonomous Intercultural Indigenous University (UAIIN) of Colombia and broadcast live through Facebook, reaching more than 2000 reproductions.

The activity was moderated by Major Libio Palechor, pedagogical coordinator of IAUIN, and also featured the reflections of Henry Caballero of Colombia; Benicio Quispe, from Bolivia; Gustavo Tenesaca, from Ecuador; Catrine Ringhus, From Norway. The conversation lasted two hours and generated numerous reflections on the current situation faced by indigenous and Afro-descendant communities in the context of the pandemic known as coronavirus.

Common ground that twinn and solidify

Both the moderator of the conversational and the five panellists agreed that, despite the different multi-ethnic contexts each represents, they all share a common past and circumstances that twinn and solidify them.

The peoples of Latin America and the world, said the indigenous Colombian Henry Caballero, "we suffer from colonial oppression; we share a presence of struggle for our cultures and our rights; we live in inequality of conditions; we continue to call for compliance with state agreements and access to health, education, work services."

This pandemic highlighted indigenous spirituality, the panelists agreed, since through the crisis it generated, awareness is being made of the value of Mother Earth, of natural food, of life, of the family, of embrace, of complementarity and human solidadrity, all that is typical of the philosophy of our original peoples.

The crisis undressed inequality at all levels

The indigenous aymara Benecio Quispe began his intervention by ensuring that what characterizes us all today is widespread fear, paralysis in the face of confinement and isolation. This crisis, bolivian argued, "undressed inequality at all levels: the state acts on economic calculations, political calculations; the health system is centralized, it cannot solve the problems of an entire community, where the most unprotected are indigenous people."

This crisis, Benecio continued to reflect, "is being instrumentalized for geopolitical purposes that only benefit a minority who intend to control the world economy and freely exploit global natural resources, which mostly belong to indigenous peoples."

Some of these inequalities, said Ecuadorian indigenous Gustavo Tenesaca, manifest themselves in state educational and economic measures that, on the one hand, decreed virtuality in an Ecuador where indigenous people do not have access to technology or the Internet; and, on the other hand, the extractivist agenda continues, as mining projects in the Amazon continue to operate.

Ecurunari, an indigenous movement led by Tenesaca, is calling for corrective action from the Government, because education plays a key role in the prevention of COVID-19. Despite the global emergency, the exploitation of indigenous territories has not stopped.

The solution is in Mother Earth, Tenesaca said, "and in our ancestral customs. Now that a food crisis is coming into a food crisis, we must generate economic revenue in our territories, so we resume solidarity barters and are implementing new fair marketing spaces between the consumer and the producer, without intermediaries."

Catrine Ringhus, an advisor to the Norwegian Student and Academic International Assistance Fund (SAIH) and a specialist in Latin American studies, shared the experience of indigenism in that Scandinavian country in the context of COVID-19, specifically in the Sami people.

According to Ringhus, indigenous Samis have access to information and public services just like all Norwegian citizens. All information, by law, must be published in the languages of these ethnic groups and disseminated in all their territories.

The problem for indigenous Samis is that their territories are shared between four countries (Norway, Sweden, Finland and Russia) and, since their survival is based on fishing and reindeer hunting, they are constantly moving, at the rate that these mammals. However, with the health crisis, they are having major conflicts affecting their culture and food system.

In this sense, Dr. Alta Hooker also planeted the cross-border problem of all indigenous peoples, since, in the case of the Caribbean Coast, many Honduran and Costa Rican citizens are entering blind spots, multiplying the chances of coronavirus contagion.

Despite the risks of the pandemic and given its food vulnerability, Norway opened its borders for those working in agriculture. That country would not live without migrants and without the importation of food. Hence Ringhus stated that, in the face of economic collapse, it is essential to learn from the ancestral culture of indigenous peoples, because "our continent was far behind you, we must learn to live well, in harmony with nature, as is the philosophy of the communities originating in America."

Rector of URACCAN closed with a gold brooch

The conversation closed with a golden brooch, culminating in the intervention of Dr. Alta Hooker, who was greeted with great displays of affection for the other panelists, the moderator and those who participated as spectators. Among the words with which they referred to her are "sister", "mother", "guide".

Dr. Hooker contextualized the case of Nicaragua, where "most indigenous and Afro-descendant peoples live on the Caribbean Coast, which accounts for 52% of the national territory", and where no coronavirus contagion is reported yet, according to reports from the Ministry of Health (MINSA).

URACCAN and community leaders in the North Caribbean have coordinated efforts with MINSA to provide comprehensive responses to indigenous peoples, who, in addition to the COVID-19 threat, have high rates of Malaria, Dengue and HIV-AIDS.

In addition, the rector of URACCAN explained, "to address the health situation in communities, we share a community network formed by the trainer, the community leader, the health assistant, the voluntary malaria partner, the teacher and the pastor, who have been in direct and constant coordination with the health system in workshops and trainings."

Our communities, in the context of the crisis, are concerned "about deaths. They are concerned about how they will be able to carry out the mourning, the wake, the farewell, especially if they are elderly," Dr Hooker said. All this tensions and causes a strong cultural shock. There comes the importance of natural medicine, ritual baths, cleanses, spiritual ceremonies and throughout the system of ancestral beliefs that maintain natural balance.

"URACCAN remains in coordination with traditional doctors and heads in each territory, to see how we move forward in solving these problems," she explained, for which U.S. institution is working on an intercultural care protocol so that the health system can understand the need and aspirations of these peoples. URACCAN's community radios, whose coverage reaches indigenous and Afro-descendant ethnic groups on the Caribbean Coast, have played a key role throughout this process, both for their scope and for the dissemination of information in their respective indigenous languages.