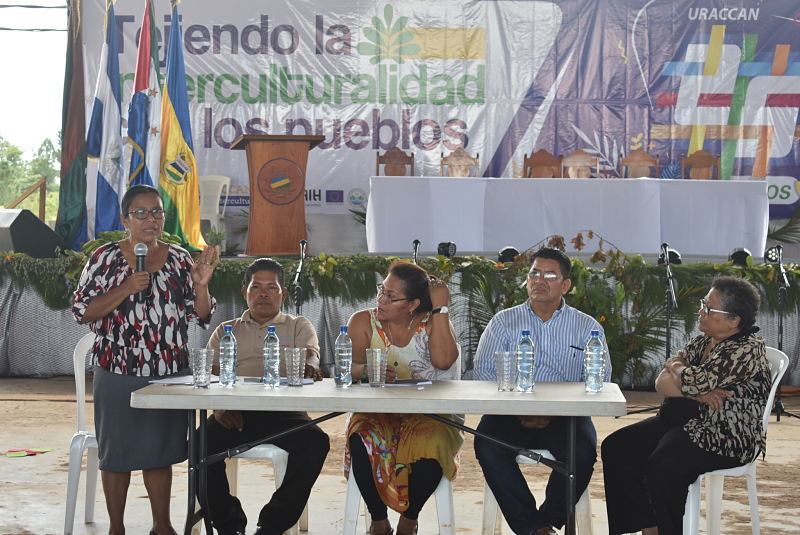 Reflection of the Mayangna indigenous language

As part of the celebration of the XXV Anniversary, the representation of the Mayangna people held a discussion table with national and international participants, to discuss the processes lived from their vision and from their own experiences.

In this way, the participants, met and discussed the processes of the Mayangna people and the contribution of URACCAN, "We often have policies on behalf of indigenous peoples that come to strengthen precisely indigenous languages, however, we often do not use these policies to promote, to develop all that is needed in terms of strengthening indigenous languages , that's an issue that's out there that we need to reflect on," MSc said. Eloy Frank, moderator of the thematic panel.

During their interventions, Elizabeth Salomon, Demetrio Antolin Jacobo and Modesta Dolores, participants of the panel, explained to the public that the displacement of the Tawahka language is influenced by the various social political pressures to devaluation, given by the ethnolinguistic hierarchy that has been established on the Caribbean Coast, which brings with it intercultural challenges that arise in the regional education system. "So it is urgent to rescue and revitalize through sociocultural promotion and animation with the Mayangna population," they argued.

Explore and get to know

For her part, Dr. Myrna Cunningham Kain, also moderator of the panel, explained that "We must know the initiative promoted by the Mayagna people the very people of the revitalization of their linguistic variants from the construction of a movement of community linguists and that is a truly innovative initiative, which has been promoted in this region", emphasized.