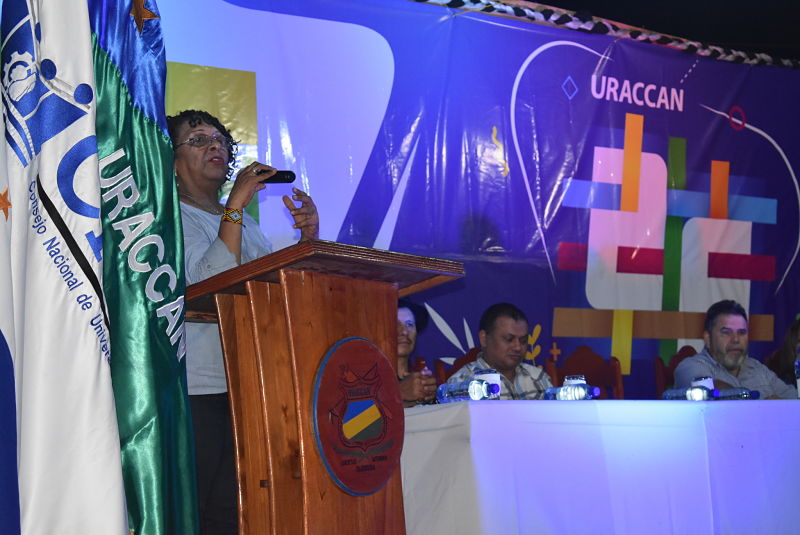 Union of feelings, knowledge and doing

This activity involved the mayors of the Mining Triangle, New Guinea, Bilwi and Prinzapolka, in addition to the departmental political secretaries of Puerto Cabezas, Waspam, The Mining Triangle, Mulukuku, Prinzapolka and Paiwas, the Association of Cattle ranchers of Las Minas, members of the Regional Government, representatives of UNESCO and ONECA, National Council of Universities (UNC), University Higher Council of Central America (Csuca), National Council for Evaluation and Accreditation (Cnea) , RUIICAY, among other national and international representatives.

"The challenges of the Intercultural Community University"

Dr Hooker stated that "In this Dialogue of Feelings, Knowledge, does and, as Father Carlos says, if you will, there were dialogues of different kinds, there were tables of Intercultural Education, on the decolonization of Higher Education, there was a table of reflection of the Indigenous Mayangna language, and there was a table of presentations of challenges and challenges for the implementation and follow-up of the plans established in CRES 2018 that the UNESCO companion brought us" , the rector explained.

In this sense, the rector of URACCAN stated that these thematic tables were made with the purpose of sharing in depth "How we dream and aspire to Higher Education as multi-ethnic spaces, we see the articulation, as we understand building, weaving an Intercultural Education so that we can all feel good", Hooker emphasized.

In addition, during her speech, Dr Hooker emphasized that the Intercultural Community Universities of the Caribbean Coast are governed by compliance with the Regional Regional Autonomous Education System (SEAR), "The need for the chairs of Education Commissions of the Autonomous Council and the Autonomous Regional Council to be members of the higher body where decisions on the articulation of education are taken was shared. we have been saying that we are the daughter of Autonomy," she said.

Also, Dr Hooker shared that the members of the University Higher Council of Central America (Csuca), pledged to "Help ixil University to be recognized, he (Carlos Alvarado, representative of Csuca) said very clearly that he will not do an easy job, we understand that, but, we are sure of his conviction and we know that he can make a difference" Pointed out.

Similarly, the rector explained that "The UNC undertook that they will form the commission where we can discuss quotas so that intercultural general doctors, already graduates, can enter anddo their specialty in national universities," Dr. Alta Hooker said.

Finally, Hooker explained that "Teacher Ramona Rodríguez also said that she is sure that the rectors of the National Council of Universities will support her in order to begin opening national universities to interculturality, that is fundamental to us," she concluded, warmly and emotionally thanking all those who have been part of this walk, asking them to continue to accompany URACCAN and the peoples of the Caribbean Coast.