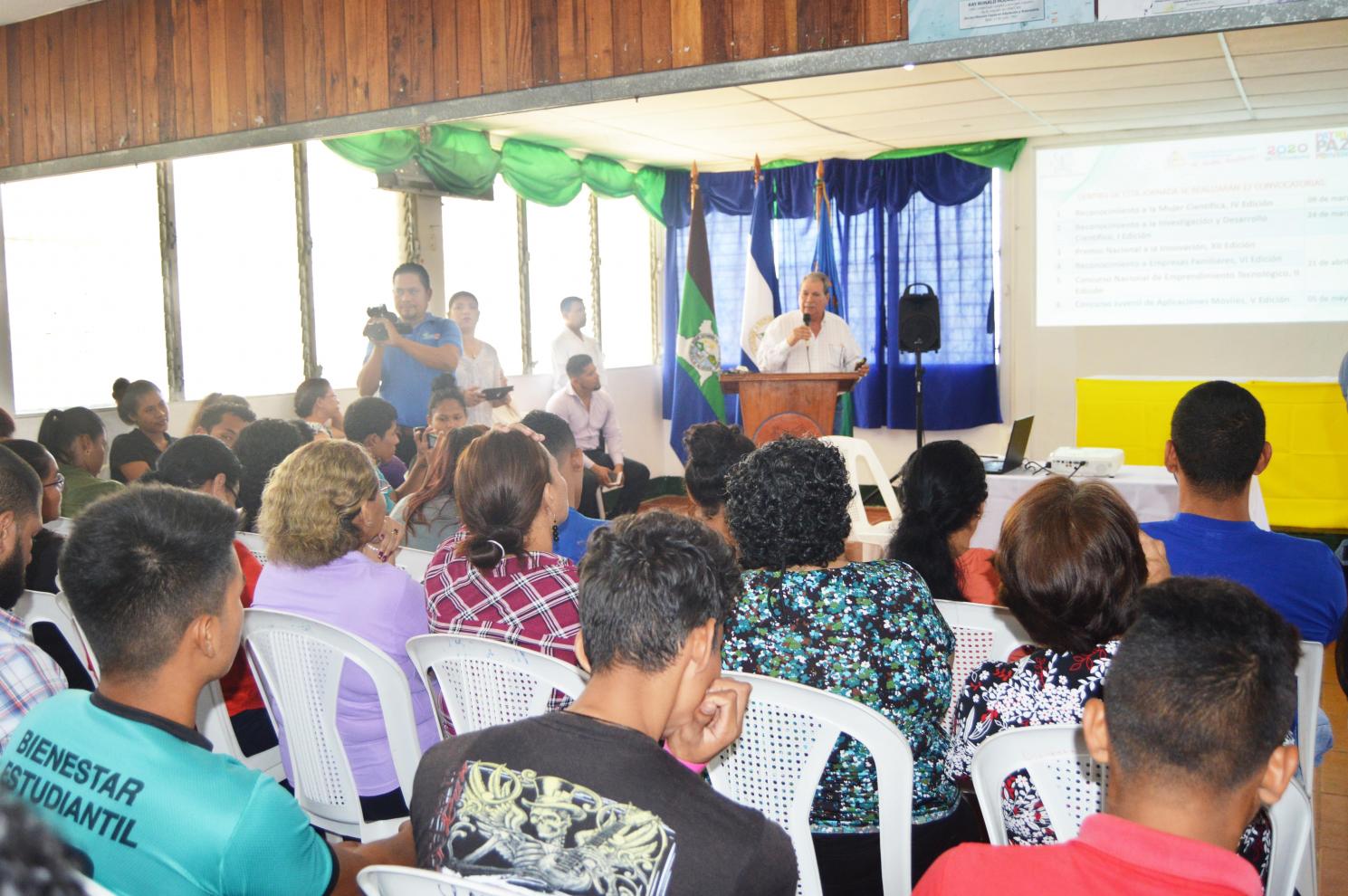 URACCAN, being an active member of the National Council of Universities (UNC), recently received a visit from the retreating general and Minister of Specific Affairs of the Presidency of the Republic of Nicaragua, Omar Halleslevens, who presented the Innovation and Entrepreneurship Plan of the Nicaraguan Council of Science and Technology (Conicyt) to the university community of the Bilwi campus.

Enrique Cordón (PhD), vice-chancellor of the venue, welcomed this minister, the director of the Conicyt, representatives of the Government of Nicaragua and the region, as well as the members of the University Council of the Campus (CUR) and the entire student community, highlighting the relevance of this activity to the Northern Caribbean of Nicaragua.

The vice-chancellor emphasized that this Intercultural Community University is focused on scientific and technological development, and promotes processes of innovation and entrepreneurship from the classroom, with students, indigenous and Afro-descendant communities. In addition, with the opening of the Slilma Centre for Innovation and Intercultural Community Entrepreneurship, 120 students have been trained in the area of innovation, 45 community students, and 35 innovative projects have been presented since the university.

Elements of the Innovation and Entrepreneurship Plan

This project also participated: the Nicaraguan Council of Micro, Small and Medium-sized Enterprises (Cominipyme), the Ministry of Natural Resources (Marena), the Nicaraguan Institute for Territorial Studies (Ineter), among other state institutions. The plan in question is aimed at children, adolescents and young people, from primary to higher education.

This plan will be developed throughout 2020 and includes the conduct of forums, workshops, conferences, seminars, congresses, national, territorial and municipal exposciences. Among its various activities are: the National Science Week, from 09 to 13 November, where there will be exposcientific competences, workshops on scientific journalism and all participants will be rewarded; the Children's Scientific Journal will be presented; and the Third National Science Forum will be made.

The Carlos Alemán master's degree, coordinator of the Autonomous Regional Government of the North Caribbean Coast (RACCN), stated that, as a regional government, they are in a process of updating the Caribbean Coast Development Plan, which is linked to the National Plan for Human Development; for this reason significant progress has been made in the development of the Caribbean Coast, emphasizing that an integrated process is being built that seeks to bring all populations together: Afro-descendants, indigenous peoples, half-breeds. The articulation of the Caribbean Coast, according to German, has been solidifying, because the territory is contributing more and more to Nicaragua's economy every day.

For his part, Yamil Zapata Webb, departmental political secretary of the FSLN in Puerto Cabezas, Waspam and Prinzapolka, emphasized that the Conicyt plan is a major challenge for students and teachers on the Caribbean Coast, in order to make a quality leap in innovation and new learning. Similarly, it emphasized that only 3 entrepreneurial brands in the region are registered and that is why the full identity potential of the people of the Caribbean Coast needed to be boosted.

Zapata also urged URACCAN students and teachers to continue awareness-raising and awareness processes about the serious malaria problem that plagues the area, conducting research with their own identities and engaging the population in the joint search for solutions.