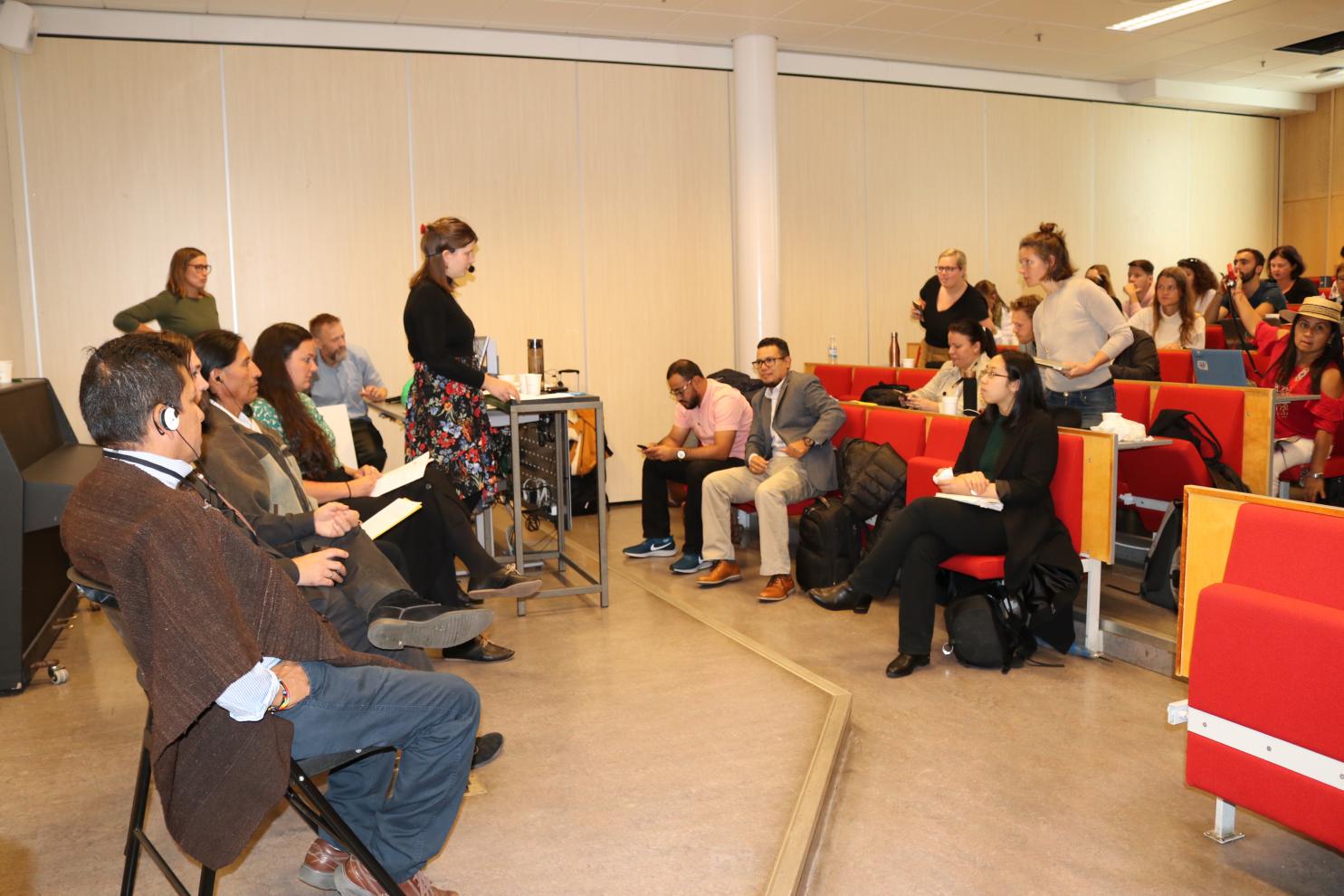 At the seminar called "Experiences of Decolonization of Higher Education", held on 05 and 06 September of the current at the facilities of Oslo Metropolitan University, Norway, the representations of different universities members of the Network of Intercultural and Community Indigenous Universities of Abya Yala (RUIICAY), like other European universities, had the opportunity to participate in thematic panels related to the experiences gained on Higher Education from their own contexts.

The first panel "Bring your privilege, how do we recognize and use our privileges?, How can we use these privileges to transform structures that produce inequity in access to higher education and research opportunities?" was led by Rebecca Scher, associate professor of English at the University of Oslo; Anders Breidlid, Oslomet professor; Warsame Ali, Researcher at the Norwegian Institute of Public Health and Rahwa Gebrekidan, Administrative Assistant at the Centre for Environmental and Climate Research (ECRC).

During development, Rebecca Sher referred to the inequalities that exist in our societies, which are often thought of or assumed as particiular provilegies, rising that one of the privileges that white people get is that "I can take my children to school and because they are white they will not be disturbed, if I go looking for an apartment they will give it to me because of my skin color" Argued.

In addition, he referred that these kinds of privileges achieved by their skin color are passed on in classrooms to their students, so, "Some students have come out, because they cannot believe the emotions that arise in the class, but I tell them that they are not bad, but that they have been born and raised in a society that have formed them in this way" Emphasized. 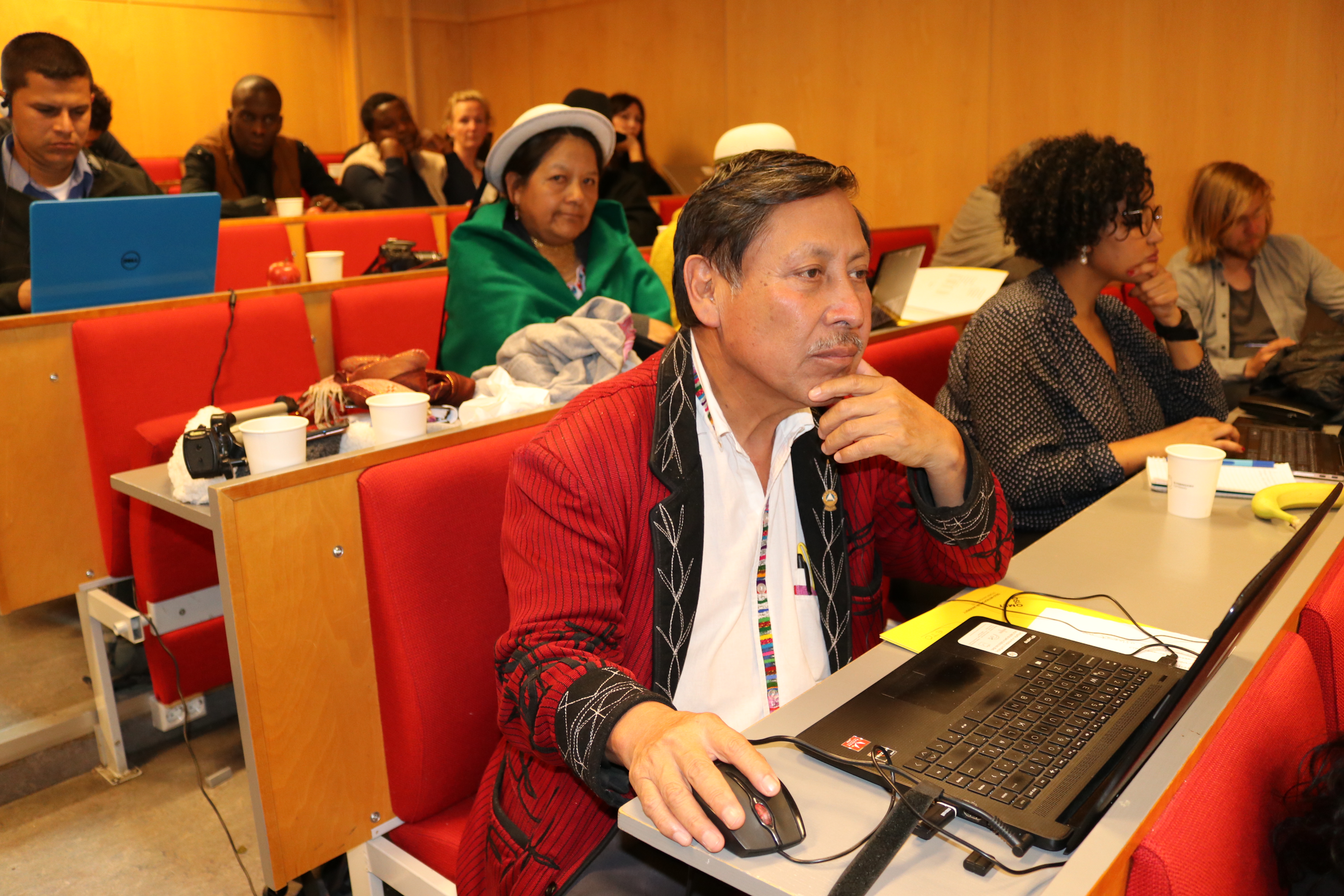 Sher referred to the intervention of Dr. Alta Hooker, rector of URACCAN, during her keynote presentation, "the rector of Nicaragua said that we have to fight, we need these debates to make them uncomfortable, to generate a change, we have to make an immense change, the problem is very big and I am so inspired to see the position of the rector, who has been trying for 12 years , that inspires me, it's so easy to become invisible, that's why it's so important to fight for profound change, if it's worth it, even if it's uncomfortable and difficult," he said.

In addition, the second panel "Tool for the Decolonization of Higher Education", was by Gerardo Simbaña, representative of the Amawtay Wasi Pluriversity (Ecuador); Nixón Yatacue, of the Intercultural Indigenous Autonomous University (UAIIN-Colombia); Mikkel Berg-Nordlie of Oslomet and Kristin Greger Eriksen of the University of Southern East Norway.

Master Gerardo Simbaña, representing the first cohort of the International Master's Degree in Intercultural Communication with Gender Approach, presented the main tool used by RUIICAY member universities as a research methodology, referring to the Cultivation and Breeding of Wisdom and Knowledge (CCRISAC), as a way to decolonize the thinking of students immersed in these universities , "CCRISAC is not a research methodology, but is the union of 3 mythologies, i.e. there are principles that govern from the three universities", i.e. URACCAN, UAIIN and Amawtay Wasi.

For his part, Master Nixón Yatacué, who is also a representative of the first cohort of the International Master's Degree in Intercultural Communication with Gender Approach, said that from the indigenous peoples of Colombia "the preparation of the fertilizer for the sow, are our objectives for the relevance of the research that we will do, then we make an exchange of knowledge, through literature and with the community we build knowledge" In addition, it added that in order to continue decolonization, work related to indigenous territories' own issues from high school was carried out to continue these processes at the university.

In this sense, Kristin Gregers, stated that through her own research, she has managed to understand and know her own roots, "I have discovered that I have indigenous roots, it is important to recognize that if I am indigenous, but there is another important issue, it is responsibility, Norwegian students do not know about colonialist history, and I have researched in schools to know and I have discovered that structures have them so , that there are no practices to advance the issue of decolonization," he explained.

The latest panel "Higher Education, Extractive Industries and Climate Change. What knowledge is recognized prior to investment in indigenous territories? What conflicts arise according to the lack of knowledge or the invisibility of knowledge?, was composed of Pablo Ceto, rector of the Ixil University of Guatemala, Jamile Nene, of the IAUIN and Lasse Bjorn, Director of Nature and Youth (UN).

During his speech, Ceto gave a brief historical overview of Guatemala, mentioning that "there are 17 million inhabitants, 21 Mayan villages, Xika, Garífuna and Afro-descendants, the Ixil people have more than 200 thousand inhabitants, 16% of the population was killed in 114 massacres and genocide", also explained the beginning and continuity of the Ixil University of Guatemala, in this sense argued that they have "pedagogy of their own" , in addition to each process keep "present the relationship with ancestors, knowledge and does, the primary source of knowledge, study and practice in the community students have to work in the community", he said.

For his part, Jamile Nene said that "the IAUIN is its own indigenous project, a right of its own in use of the ordinary law that is part of the organization", in addition, mentioned that certain organizations and companies "want to impose that the extractivist industry as a social criterion and economic growth", emphasized.