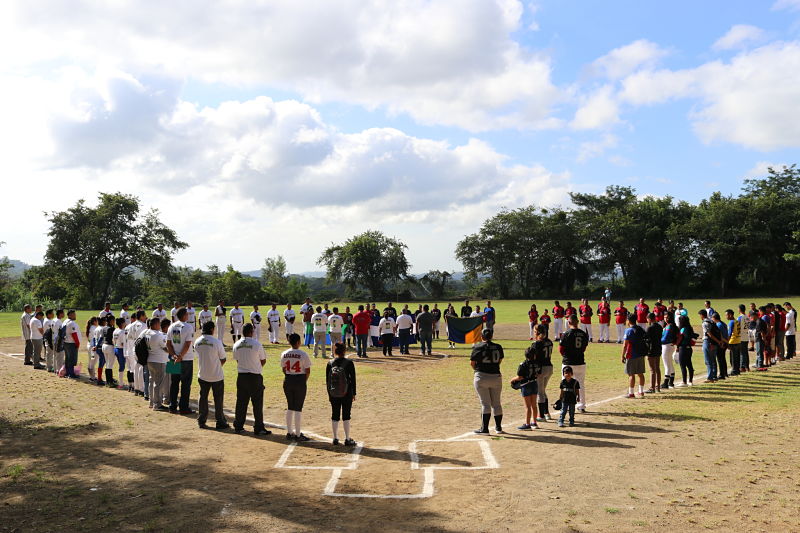 With a parade of 15 teams, participants in the SECOND modified softball league that performs URACCAN, from its Las Minas campus on its Siuna campus, the league was inaugurated, which is dedicated to Dr. Alta Hooker Blandford, rector of this house of higher education and who in the coming days will preside over the inaugural event. The parade was accompanied by the authorities of this university campus and municipal authorities.

During the event, Dr. Leonor Ruiz Calderón, vice-chancellor of this university campus, noted that in the context of compliance with institutional philosophy is the commitment to the training of men and women, but also to recreate art, sport and culture, "One of them is to be able to make this second season of the interinstitutional league, where today we have 15 teams in which institutions such as Mefcca participate , Minsa, the police and teams from sectors like taxi drivers and we have a new team of mechanical partners, that is, there are 15 teams, of them 7 are women," she said.

In addition, he added that the acceptance of the league means commitment to society, "When we started the league we had the participation of 10 teams and today we have 5 more, this demonstrates the commitment of the institutions, but also that of URACCAN, to promote the sport", emphasized.

The municipal political secretary, Dr. Noel Espinoza, emphasized that this league promotes harmony, fraternity, unity, "Especially healthy recreation between the different teams participating in this second edition of the interinstitutional league that promotes our URACCAN university, which is a very important aspect in the social and sports life of the municipality, because this allows to strengthen the bonds of friendship between each of the athletes" Highlighted.

Close ties between institutions and society

For his part, Major Commissioner Roger José Torres Potosme, head of the departmental delegation of the National Police of the Mining Triangle, Prinzapolka and Mulukukú, referred that this league is extremely important for recreation, "We participated in the first league, where we obtained the second place and in addition this allows us to reap friendships and strengthen the police's ties with the population , as he has always done since his story. In this new season we are involving a team of women who have also been participating in other events and we weigh that this represents an opportunity to strengthen the institutional ties that strengthen us all," she said.

This second season is dedicated to the rector Hooker, for her "Invaluable support for sport for the recreation of the university community of URACCAN and the strengthening of interinstitutional relations and the culture of peace in the construction of intercultural citizenships".