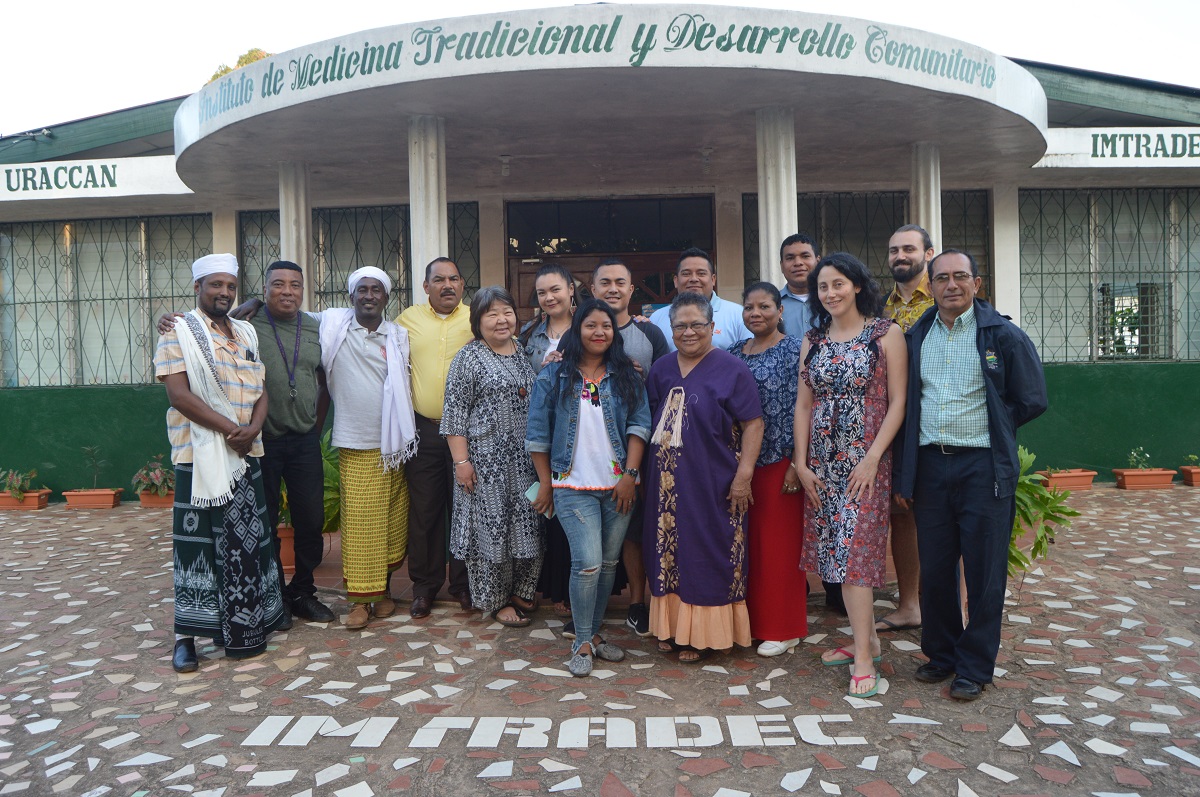 Sharing and feeling of intercultural knowledge and knowledge

A group of indigenous leaders from the countries of Micronesia, Suriname, Kenya, Moari Indians from the Cook Islands, Canada and Russia, made a visit to the First Intercultural Community University in Latin America (URACCAN), on the Bilwi campus, with the aim of knowing the processes provided by this house of higher education, through intercultural community higher education.

The Phd. Enrique Cordón, vice-chancellor of URACCAN at the Bilwi compound, welcomed them, and told them about the university's trajectory in these 25 years of foundation, "the university arises in order to strengthen the project of Regional Autonomy, a course decided by the people of the Caribbean Coast of Nicaragua, Autonomy meant how to define the course of our lives , how to manage our resources, but also how to lead all our relationships of life and social relationships of the communities of the Caribbean Coast," Cordón said.

For his part, Professor Yuri Zapata, vice-chancellor general of URACCAN, detailed some fundamental aspects that this house of intercultural higher studies projects such as the processes of internationalization, "when URACCAN was founded, a different university was born that responded to the context of the Caribbean Coast, that means that in our organization and operation it is different from the rest of the universities , we started with 3 campuses and 3 university extensions, however the need and request of the population constituted a new campus in an area that had historically been not served by the Nicaraguan Caribbean," he said.

URACCAN strengthening the needs of the Caribbean Coast

Similarly, representatives of URACCAN institutes and centres were present at the Bilwi campus, which is why the Msc. Dixi Lee, coordinator of the Institute for Studies and Promotion of Autonomy (IEPA-URACCAN) presented about the work of this institute and how it has strengthened the indigenous, Afro-descendant and mixed-race peoples of nicaragua's Caribbean Coast through the institutional policy of Intercultural Community Extension.

Meanwhile, the Msc. Serafina Espinoza, director of the Institute of Traditional Medicine and Community Development (IMTRADEC-URACCAN), told those present about the work of this institute of the university "in 1996 responding to the needs of the region and under the health rights of indigenous peoples, Afro-descendants of the Coast, since its foundation has the search for more inclusive health that respects the worldviews of peoples , who respect the perception of medicine in the villages, that is why we work with the local and regional authorities," Espinoza said.

The visit of the group of indigenous leaders from the countries of Asia, Europe and North America was sponsored by Dr. Mirna Cunninghan, who was the first rector of the University of the Autonomous Regions of the Nicaraguan Caribbean Coast (URACCAN).

In this context, Margarita Mora, representative of the Our Planet Organization said that, "It is an organization that was established to support indigenous peoples in their management of the territory, their culture, their spirituality, as an ally of indigenous peoples, we are here in URACCAN to learn from their experience in Intercultural Education and how the university was created , his whole career, here we are with people from different parts of the world," he said.

Mora also stated that learning in this conversation with URACCAN authorities in the Bilwi compound "has been impressive, we have here colleagues who were totally inspired about what URACCAN has done during these 25 years, many of them before coming had questions of how to get traditional education in a system that responds to the needs of their indigenous peoples and that is what they have heard... they cleared up a lot of questions about how they manage the traditional medicine system and how that is combined with Western systems and how they have managed to get the two systems coordinated to respond to people's needs," he concluded.

It is important to note that this group of indigenous leaders only visited a university in Nicaragua and was the URACCAN, as mentioned above to learn how the university has managed to transcend through Intercultural Higher Education to achieve the Good Living and Good Living of indigenous peoples, Afro-descendants and Mestizos of the Caribbean Coast of Nicaragua.