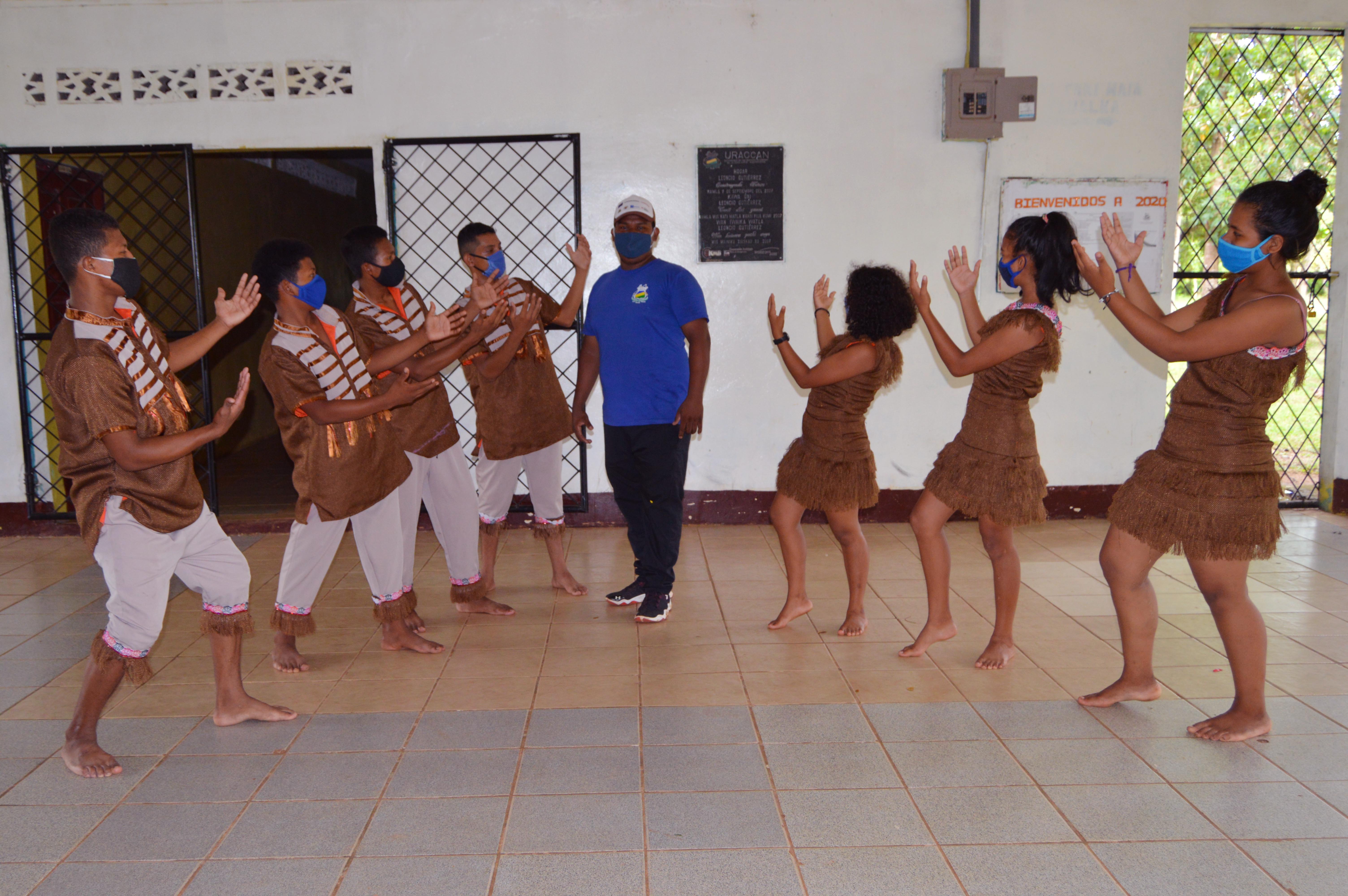 The young people of the dance group, with their instructor, in one of their artistic practices.

Representation of the municipality of Puerto Cabezas

In 2003, URACCAN Bilwi Campus, under the funding of Horizont3000, created the Leadership School, being a training program aimed at indigenous youth, mainly from communities. Since that first generation, there are dance groups that highlight the identity, culture, traditions and ways of life of indigenous peoples of Nicaragua's Caribbean Coast.

In 2020, representatives of the sixth generation dance group were invited by the Regional Government's Ministry of Culture to participate in the Municipal Intercultural Folklore Competition, where they competed with 7 public secondary schools in Bilwi, Puerto Cabezas. There, the Leadership School Dance Group took first place at the municipal level; now, they will have the opportunity to represent the municipality in the event at the national level that will be held at the Rubén Darío National Theatre, in the capital of the country.

"We're really being recognized and we're being valued throughout the university's work. For the Leadership School it wasn't really like going to a competition, but they (the group) acted naturally, as they have been doing," said teacher Ivania Simons, the school's principal.

The group is characterized by representing and keeping alive the Miskita culture from their traditional dances, focused on the experiences of each people, "for example, now they will go to make the presentation of two miskitas music," Simons said.

The presentations are based on traditional games and coexistence with Mother Nature, these activities have been carried out in a traditional way in the different villages of the Autonomous Regions, usually to keep together the entire population of the community, also highlight the representation of youth in the communities.

In Managua, they will dance Tambaku, which is a traditional dance, where artistic content is focused on the ways of receiving the new year, as was done since the time of their ancestors, explaining the union that has existed with all the members of the community, living together as a family, that through the dramatizations the social environment of the indigenous population is represented , stressing that each member of the community has a free and important participation.

Another of the musics that will have the honor of presenting at the Rubén Darío Theatre is the Krabu Tangni Painkira, this refers to the Nancite tree, "is praising that fruit, that flower as something typical of the region," she explained.

Revitalization of culture through one's own dances

For his part, Professor Rocky Ronny Maybeth Castillo, dance instructor of the Bilwi enclosure, said that, through artistic expressions, the student strengthens his indigenous culture, he also argued that among the main characteristics of the group is the manifestation of indigenous identity through Miskita dance.

"The dances are based on the depiction of the work of indigenous peoples, on hunting, fishing, and fruit harvesting (...). The choreography consists of three parts, (mainly) is based on the cultural manifestations of peoples through parodies and games, which is celebrated in indigenous communities," the instructor said.

The student who will travel to the capital is composed of: Anthony Solano, Guadalupe Peña, Lorenzo Simons, Ana Zorayda, Keyla Gutiérrez and Itza Pérez, who are very excited to represent the municipality, and also the Intercultural Community University, URACCAN.

Young Anthony Solano, originally from the Raití community, Río Coco, Waspam, said that being part of this dance group means being proud to be a miskito. "When I'm dancing I feel closer to what our ancestors were like (...), what I like the most are the lyrics of the miskitas songs and the movements we do, because we're doing it (dancing) according to what the song's lyrics say," he said.

Solano stated that when they perform dance, each movement is more than a dance, because for the miskitos Indians it is a representation of their ancestral feelings, the detail of putting on their clothes, is a way of thinking about how they lived in the past, their forms of food and the various activities they did for survival.

Finally, student Itza Pérez Romero said she was very proud to be part of the dance group that will represent the municipality in a national event, "I am proud to represent the Miskita ethnic group, because I am miskita, I feel happy, excited", concluded Pérez.