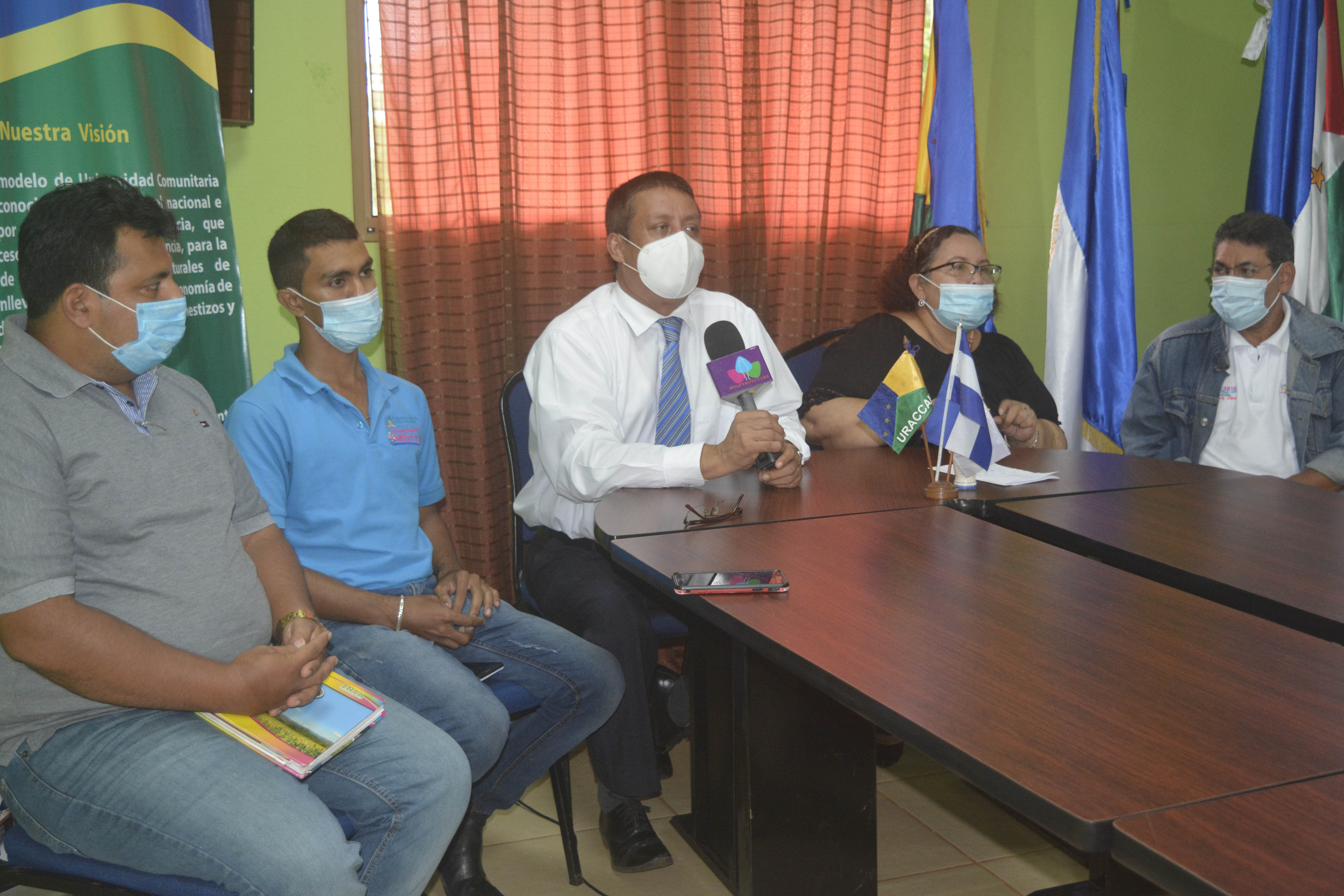 Vice-Chancellor of the New Guinea, PhD. Eugenio López (center), together with authorities of state institutions in the municipality.

Contributing to the scientific, economic and social development of the country

URACCAN, in coordination with the Municipal Mayor and institutions such as the Nicaraguan Institute of Agricultural Technology, the Ministry of Family, Community, Cooperative and Associative Economics of Nicaragua, and the Ministry of Education, with the participation of local cooperatives and entrepreneurs, prepare for the IV edition of the National Day of Science, Technology, Innovation and Entrepreneurship.

On Tuesday, September 22, the launch of this activity took place at the New Guinea site, where government institutions working for development and social education presented themselves with local authorities and presented to the general population the action plan for the realization of the fair.

At a press conference, the teacher Claribel Castillo Abeda, municipal mayor, noted that "the National Day of Science, Technology, Innovation and Entrepreneurship 2020 will be held on Thursday, October 15, in the central park, and is for the purpose of promoting science and technological information and projecting them as fundamental pillars of the economic, cultural and social development of our country".

Castillo added that "this is a space where universities such as URACCAN and institutions such as INTA, MEFCCA, Inatec, present scientific and technological research work to the general population."

In this sense, the PhD. Eugenio López Mairena, vice-chancellor of the university campus, noted that "from the intercultural community university 8 research papers will be presented, but in addition, prior to this, on October 6 and 7, a process of guided visits to schools and different institutions will be carried out, so that the different elements of the academic offer 2021 can be known, motivate students so that they can in the future be researchers , entrepreneurs and that we can highlight all the initiatives". López ended up strongly inviting the population to join this great activity.

Coordinations of academic areas and coordinations will be arranged to receive the student of the last year of high school, as part of the process of guided tours; these visits are intended to promote interest in science and technology among the general population, allowing all Nicaraguans to have access to knowledge, solutions and innovations that are being generated in human talent-forming instances.

The launch of the IV Conference on Science, Technology, Innovation and Entrepreneurship, which was also attended by MEFCCA will be developed under the motto "Science and Innovation for Transformation".

For meFCCA New Guinea graduate Wesli Fonseca, the "territorial fair expo will be the space to publicize the work of each of the state institutions and universities where we will be demonstrating creativity, innovation, talent in the city".

Finally, Fonseca noted that "as MEFCCA we will be presenting a craft project with bamboo, after a training process; in addition to the demonstration of sexing in pond tilapia fish", this as part of the work that this dynamic government institution has been developing for the recreational family economy model.

The National Day of Science, Technology, Innovation and Entrepreneurship 2020 hopes to promote science and technological information and project them as fundamental pillars of the economic, cultural and social development of our country.