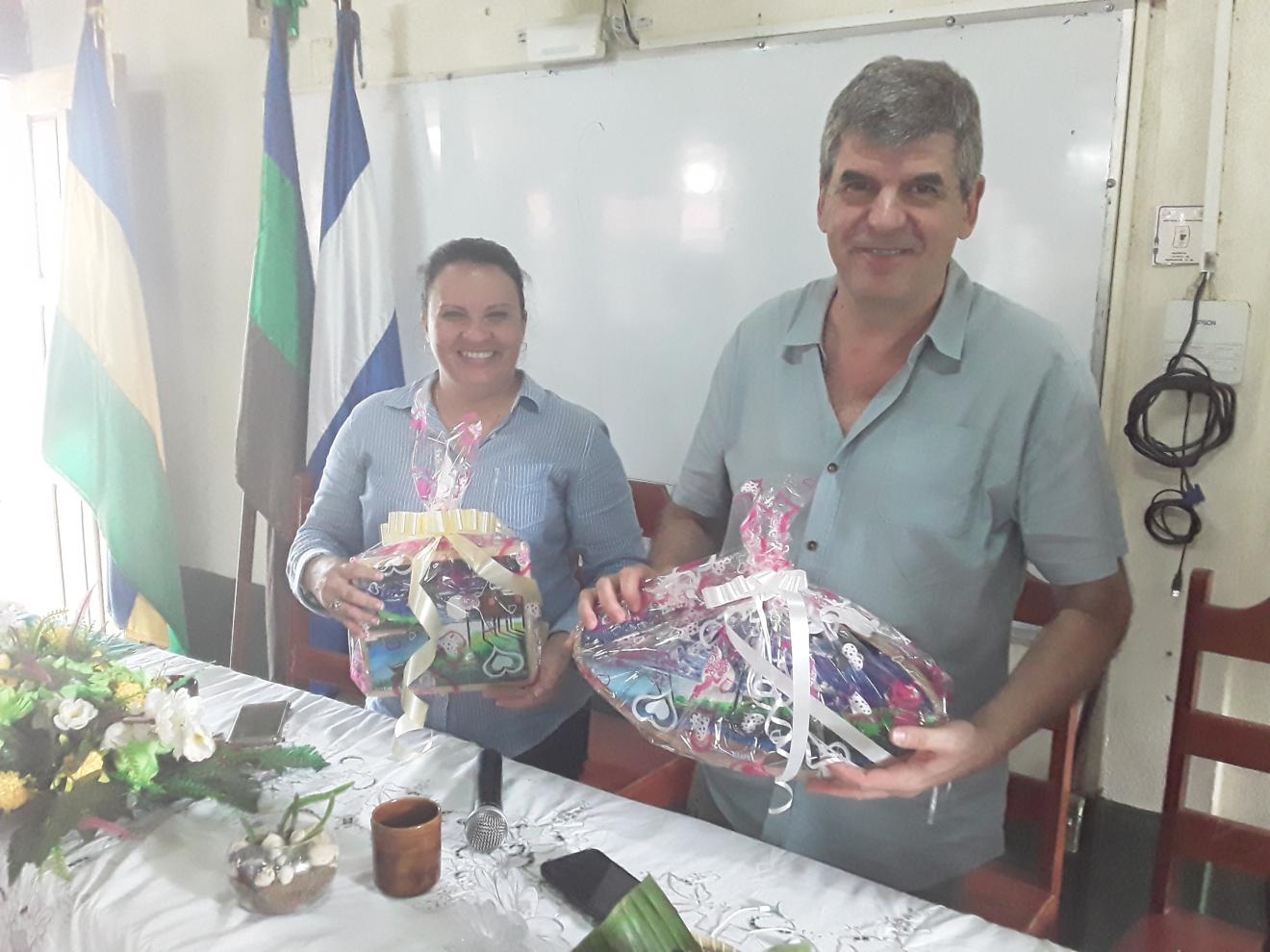 By: Lázaro Figueroa and Deysi Chavarría

During the UNESCO Chair "Wisdoms and Knowledge of Peoples", organized by URACCAN, Dr. Francisco Tamarit, former rector of the University of Córdoba, Argentina and general coordinator of CRES 2018, shared a master lecture. In addition, during his visit to URACCAN, he visited the Rosita extension, where he was received by the teaching staff and students of this study house.

Dr Tamarit emphasized that being at URACCAN's facilities is a blessing because it was the fulfillment of a dream to know the Nicaraguan Caribbean Coast, because it is part of the history of Latin America's struggle.

Master Veronica Valdivia, coordinator of the Rosita extension, received the authorities and shared on the institution's work and emphasized the number of graduates of URACCAN, who are mostly working in the different local institutions.

Tamarit, shared that until before he was rector in Cordoba "he had never reflected on the importance of higher education, a little dominated by hegemonic culture, one does his job and believes that he is making the best contribution to the region, however we have a debt as a continent and it is the lack of respect for diversity," he said.

Dr Tamarit was general coordinator of CRES 2018 and recounts with concern that statistics mark the growing violence in Latin America, where we have no wars, but we do not recognize ourselves as brothers; according to the expert this happens because we are constantly living defensively and offensively "latin American universities are co-responsible for this reality, they accompanied, they enhanced this reality, it is shameful for us, that is why in CRES the debate had to be cultural diversity and interculturality," he explained. For Tamarit this is the only way to point to the heart of the problem, because "the original communities lost their knowledge and that is the most serious homogenization is taking away the harmony not only between man and women but also with our planet," he added.

"There is no way to machine a future for our continent if there is no knowledge in the equation of solving our problems, the society that we want to dream, that we want to live, is a society of good living, tolerant, diverse, inclusive requires, first of all, aligning the world of knowledge behind the objectives," he said.

Transforming what is meant by university is the biggest challenge highlighted by the exhibitor, then describing that reality. a quality academy, insotining, diverse and relevant, busy with the problems of society.

"We have approximately fifteen thousand higher education institutions, we have more than twenty-five million young people between the ages of 20 and 25 in universities, with this demand we have the challenge of renewed universality, maybe you will not believe it, there are not many examples like URACCAN University," he said.

To the surprise of the receivers in the auditorium, Dr Tamarit, with that humility that characterizes him said that he wanted to come to this university, since URACCAN belongs to the RUIICAY, where URACCAN's work stands out, "you understood before us, there are not many experiences like URACCAN," he said.

In addition, Tamarit added that URACCAN does not stand out for the number of students, nor for novel awards, "and there is something that you do that moves us and is coexist with the rest of the territory, to understand that in the classroom you can live together different cultures," he stressed.

Transforming perspectives from equality and equity

For her part, Professor Samanta Rodríguez, of the Miskitu ethnic group shared that "URACCAN gave me the opportunity to professionalize without having financial resources, what I liked most about URACCAN is that there is no difference between one student and another because we know that intercultural practice is not only to have different indigenous groups in the classroom , interculturality is to live at every moment coexistence," he said.

The expressions of amazement at URACCAN's educational work continued by the expert, who stressed that in this house of study there is no culture in the other, but that it coexists on a level playing field and respect "a continent does not lower the rates of violence if it is not agreed in an area of equality, you must have the challenge of continuing to transform" Explained.

"To pursue a bilingual intercultural education career at URACCAN, helped me to retify my mother tongue Thuahka, because I only spoke Miskitu, that is, I did not know what my identity was, that is why I dialogued with my husband and my children and shared that we had to keep our language and we had to do it from home and decided to recognize ourselves as what we are , sumo Tuahka and we enter a process of revitalization of our language from home, today we do intercultural practices with my family, we can talk in Miskitu and also in Sumu Tuahka and sumu Panamahka because that is the identity of my husband", shared Mr. Tomasa Gomes, who has been satisfied by the knowledge acquired at URACCAN.

The conversation that was developed with teachers and students of the Rosita extension, was part of Dr Tamarit's visit to the Las Minas campus and its extensions, as a way to share and know the walk of URACCAN in the process of Intercultural Higher Education.