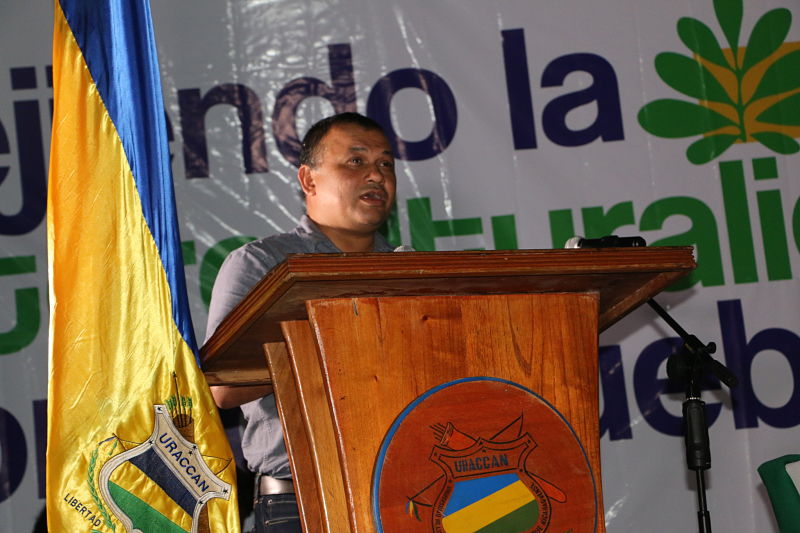 URACCAN, daughter of 32 years of autonomy

In celebration of the XXV Anniversary of the First Intercultural Community University in Latin America, URACCAN, various dialogues were held on various topics, which have strengthened the path of the internationalization of Intercultural Higher Education, in this sense, the Msc. Carlos Alemán, coordinator of the Autonomous Regional Government of the North Caribbean Coast (Graccn), led a conference on "The Role of Intercultural Community Universities in Strengthening Autonomy in the North Caribbean".

During the development of its theme, German emphasized all the substantial contribution that URACCAN has made, since its founding, to the Autonomous Regions, adding, that the autonomy process on Nicaragua's Caribbean Coast was based on the claim of the rights of indigenous and Afro-descendant peoples, inhabitants of these territories, "It was also established there in the Statute of Autonomy , the need for costeños to have the opportunity to access higher education," he said.

Higher Education on the Caribbean Coast

German also recalled that when the process of consultations of the Law on Autonomy for the Costa Peoples on Priority Needs for the Region was done, Higher Education "Appeared among the first six priorities", that is why, "URACCAN was raised", adding, that the first trained were the teachers in education "So that they could finish their own degrees", creating their own human resources Said.

In this context, the coordinator of the Regional Government emphasized that in 2000 an event was held where the functions of the university were made clear, "Teaching, research, community extension and it was established that the main objective of URACCAN, was to train the human resources that will strengthen the autonomy process", emphasized.

Besides, the Msc. German suggested that there has been a lot of knowledge on the Caribbean Coast from indigenous and community leaders, so that URACCAN's strategic plan set out to create professionals relevant to the needs of the Autonomous Regions, "Then, these extension programmes were created that would strengthen knowledge, the mechanisms that could be found in communities... to create a base of indigenous leaders who could contribute to the processes that were being developed at the community level," he said.

Similarly, he highlighted the research process that URACCAN carried out and continues to do, with the aim of creating new learnings in the coastal society, according to Carlos Alemán they were made to know "What ancestral knowledge existed in indigenous peoples, that it was important that teachers are resumed in normal schools , that was not yet defined or how we were going to do the process of articulation in health, what were those diseases that came articulated to cultural issues... that was raised to be one of the lines of research that URACCAN had to do," he argued.

On the other hand, he mentioned in the community extension function of the university, which has served to meet with indigenous leaders, to understand what the same law of autonomy raises about land demarcation, "A team was created in URACCAN so that they could consult communities as they had to do the demarcation, then joined with an effort with the Regional Councils to discuss a proposal for a demarcation law that should be sent to the National Assembly for the degree, that is the beginning of the law that is now called 445 and came out here in URACCAN," German said.

In conclusion, the official stated that all URACCAN graduates in one way or another are contributing to the dreams, which were once had, when the Autonomy Act was created, now become a reality, "Because they are making contributions in terms of new knowledge that is coming to communities, knowledge that dispersed indigenous communities did not have before , but, it is still not enough we need to go further because it is still in a process of construction," German concluded.