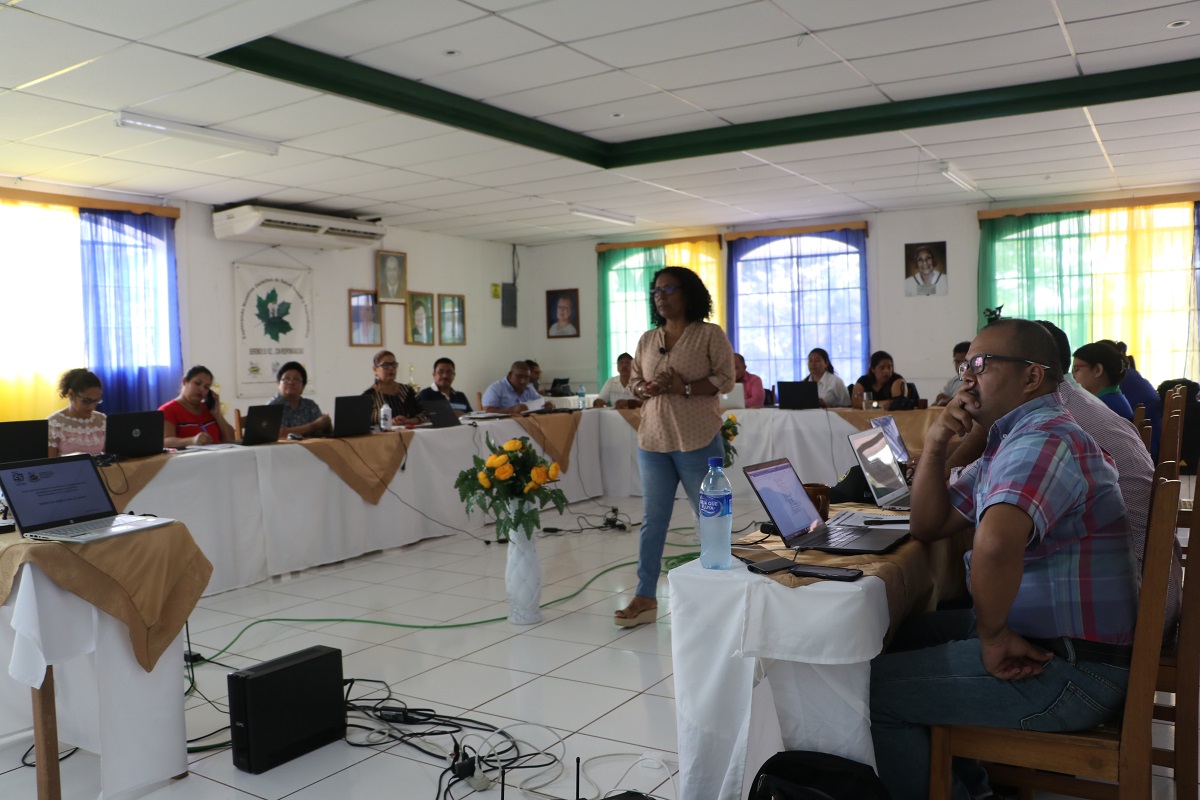 As part of the second day of the workshop on "Training trainers in strengthening research capacities" with the (CRISSAC); carried out within the framework of the NORHED project "RUIICAY-HIOA Program for Linking in Intercultural Communication", sponsored by the Norwegian Agency for Development Cooperation (NORAD) and the project "Dialogue of Knowledge and Does, Strengthening the Exercise of Autonomy", sponsored by SAIH, teacher Bernandine Dixon, Director of the Center for Multi-Ethnic Women's Studies and Research (CEIMM), the "Intercultural Gender Perspective" was presented.

Dixon explained that URACCAN works from a multi-ethnic, multicultural context that demands to implement new perspectives and new approaches that are including and non-exclusive; for this reason the relationship between gender focus and interculturality is promoted as two concepts that must walk together to move forward with the type of university you want to have.

"A concept has been worked on to understand these perspectives at URACCAN; among the first approaches of this process is that the intercultural perspective of gender is understood as a conception that begins with the understanding of relations between men and women, which are between the different peoples that inhabit the region, is analyzed from their worldview, situation, reality and needs in their ethnic context," he stressed.

In this sense Dixon points out that this concept of the intercultural perspective of gender is also a theoretical bet, that if built from our own context can be a theoretical contribution to society, "For URACCAN it is a cross-cutting perspective in the work; therefore it must be in teaching, research, and extension work as well as in every field that is worked in college," he suggested.

This perspective allows us to do different analyses and focus on the problems that are intended to be solved and the changes that are wanted in society, as well as to understand the characteristics that define our indigenous, half-breed and Afro-descendant societies as their similarities, it also analyzes the vital possibilities that exist and that may be causing situations of inequalities.

In the development of the theme, the director of external cooperation of URACCAN the PhD. José Saballos, said "the prospect of gender equity and equality when viewed in one way or another do not solve a fundamental system, because women are diverse, and the two previous perspectives put women as a homogeneous body; but the situation of women varies according to conditions such as a woman branch has a different situation of inequality than that of a half-breed; for this reason gender equity cannot be worked with that all women are equal; this causes the intercultural perspective of gender to transcend the disconnection of the prospects of equity and equality and to begin to see women from their different particular situations and contexts",

To this he suggested, that research must go into these particular experiences in order to have a more holistic concept.