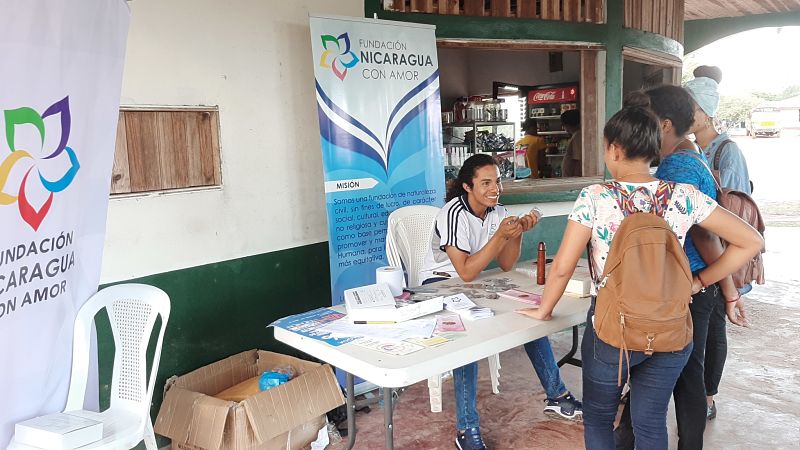 URACCAN, working together with the Nicaraguan Foundation with Love, through Rectory, Student Welfare and the National Union of Students of Nicaragua (UNEN-URACCAN) made a visit to the Bilwi university campus to raise awareness among the student community about the importance of condom use in their sex life and to do rapid HIV testing.

In this regard, Lesther Molina, Director of Student Welfare of URACCAN recounted that this activity is based on an agreement between the university and the Nicaraguan Foundation with Love, for the implementation of the sexual and reproductive health campaign, adding that the other campuses will be visited, but started with Bilwi and will continue with the Waspam extension for the high rate of positive HIV and AIDS cases that have been diagnosed in the region.

"The important thing about this is that, since Student Welfare, since the Student Movement in coordination with this Foundation and the Minsa, we are working on this issue of sexual and reproductive health because it is of great interest to young people, because of the high rate that is being given of sexually transmitted diseases, of pregnancy of young people, and it is an issue that concerns us as a university" Molina said.

Workshops and tests for HIV and AIDS prevention

In addition, Jonathan Mercado, a member of the Nicaragua con Amor Foundation, said that apart from doing free HIV testing, youth are also being trained on the right way to use condoms, "It is important to always teach boys to have responsible sexual and reproductive health," Mercado said, noting that this day is taking place with all universities belonging to the National Council of Universities (UNC) "This time we have coordinated with UNEN the governing team to be here," he stressed.

Lesly Navarrete, of the Foundation's team, emphasized that this campaign is to provide information to the student community "On HIV, the concept of advanced HIV, also to try to identify risky and informal sexual practices about the ease of getting tested quickly for HIV," Navarrete said, adding that through classroom talks it was possible to identify "That the university community knows about the issue , is very receptive and eager to know more about risky sexual practices," she said.

Visits to other venues

In addition, Rubel Chamorro, representative of the Student Movement of URACCAN, said that through UNEN-URACCAN has been contributing to the institution and the student community with specific topics that help the well-being of the student, in this case work was worked in articulation with the Foundation and the Minsa so that young people know ways to prevent sexually transmitted diseases " "It is important that young people know that we are in a world of risks, that they are aware that it is HIV," Chamorro said.