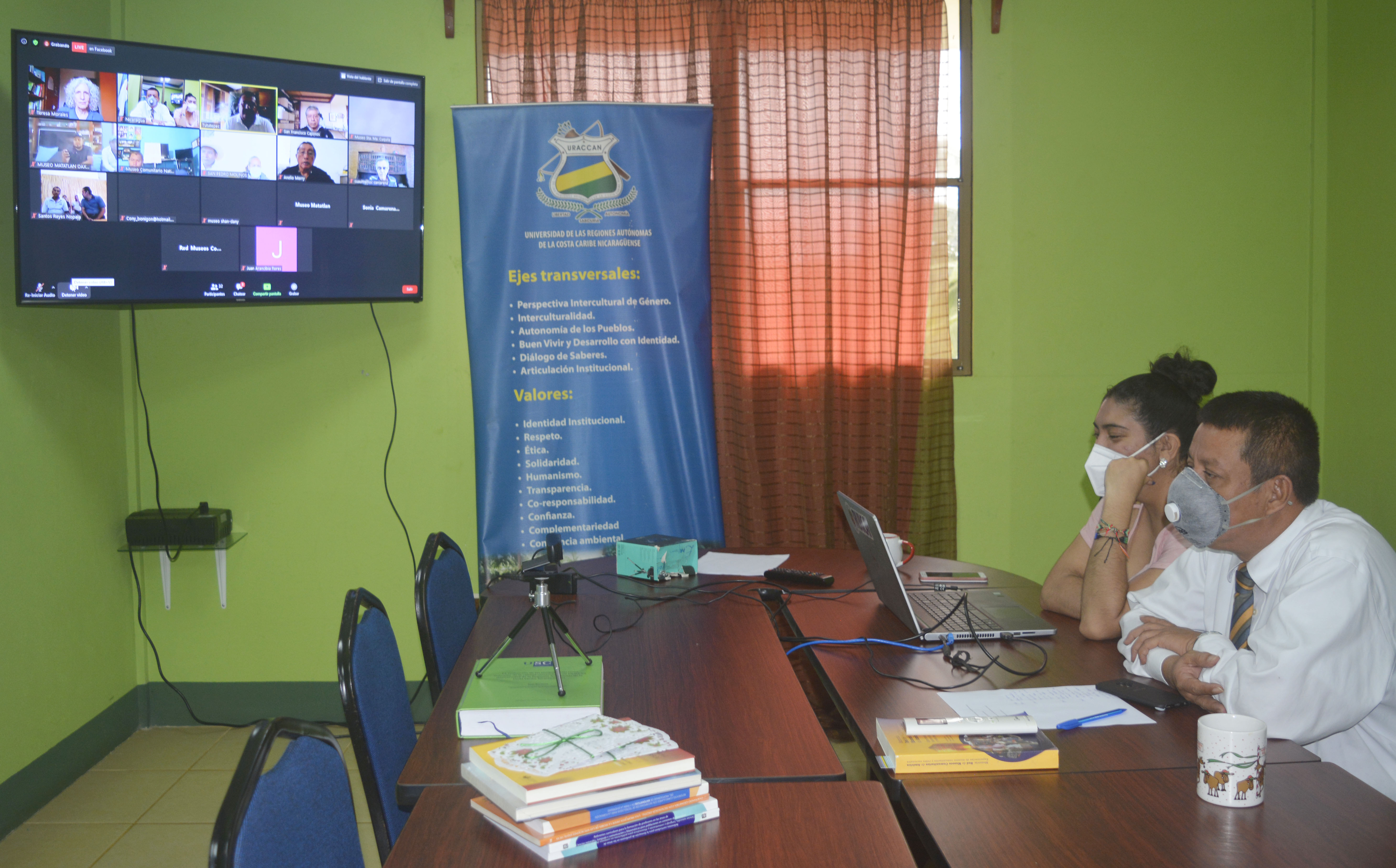 The vice-chancellor of the New Guinean compound, PhD. Eugenio López, and teacher Greysi Sobalvarro Pauth during the virtual celebration.

Museums fortify ancestral memory and aspirations for the future.

URACCAN, as part of the Network of Community Museums of the Americas and facilitator of community museums in Nicaragua, joins virtually the celebration of the XX Years of founding this transcendent network that documents the history, culture and identity of our peoples.

Since the founding of this network, community museums have been seen as a space where community members build a collective self-knowledge, fostering reflection, criticism and creativity.

The Network of Community Museums of the Americas was formed in 2000, bringing together representatives from several communities and organizations in Bolivia, Venezuela, Panama, Costa Rica, Nicaragua, El Salvador, Guatemala and Mexico. Participants from Brazil, Colombia, Chile and Peru subsequently approached. In the case of Nicaragua, it is through the community museum "Los Ranchitos", of the URACCAN, that it is part of this network and from where different processes of creation of other museums in the country are coordinated.

The objective of the Network is to encourage organized communities in the Americas, through community museums, to strengthen their identity, their autonomy, and their capacity for self-determination, to build the path to social transformation based on their ancestral values.

For Cuauhtémoc Camarena, advisor to the Network of Museums of the Americas "from community museums identity is strengthened, because they legitimize history and their own values, projecting the way of life of the community in and out of it. It strengthens the memory that fuels their aspirations for the future."

For Dr. Eugenio López, vice-chancellor of URACCAN campus New Guinea and facilitator of the Network "through community museums the memory of our ancestors, our traditions and our way of seeing the world is kept alive; Community museums allow the exchange, solidarity and joint action of the communities of America and are in themselves their cultural heritage."

It is from the very philosophical of URACCAN that the Los Ranchitos museum is created, this being a space of harmony and coexistence, where the community collectively decides the creation and maintains the memory and identity of the people.

In this sense, the teacher Greysi Sobalvarro Pauth, argues that "Los Ranchitos, as part of the Network of Museums of the Americas, is the facilitator of community museums of Nicaragua" and that "to celebrate XX years of creation of the network, of which we have been a part since its inception, is to contribute to the identity and collective memory of the peoples".

The Network has so far developed a collective organization and training project, where URACCAN has been present in several of these processes. Seven international museum meetings have taken place within them, one in Mexico in 2000, in Guatemala in 2002; followed by El Salvador in 2003; while in Nicaragua, based in URACCAN, New Guinea, it was held in 2005, followed by Venezuela in 2008, Costa Rica in 2010 and Bolivia in 2014.