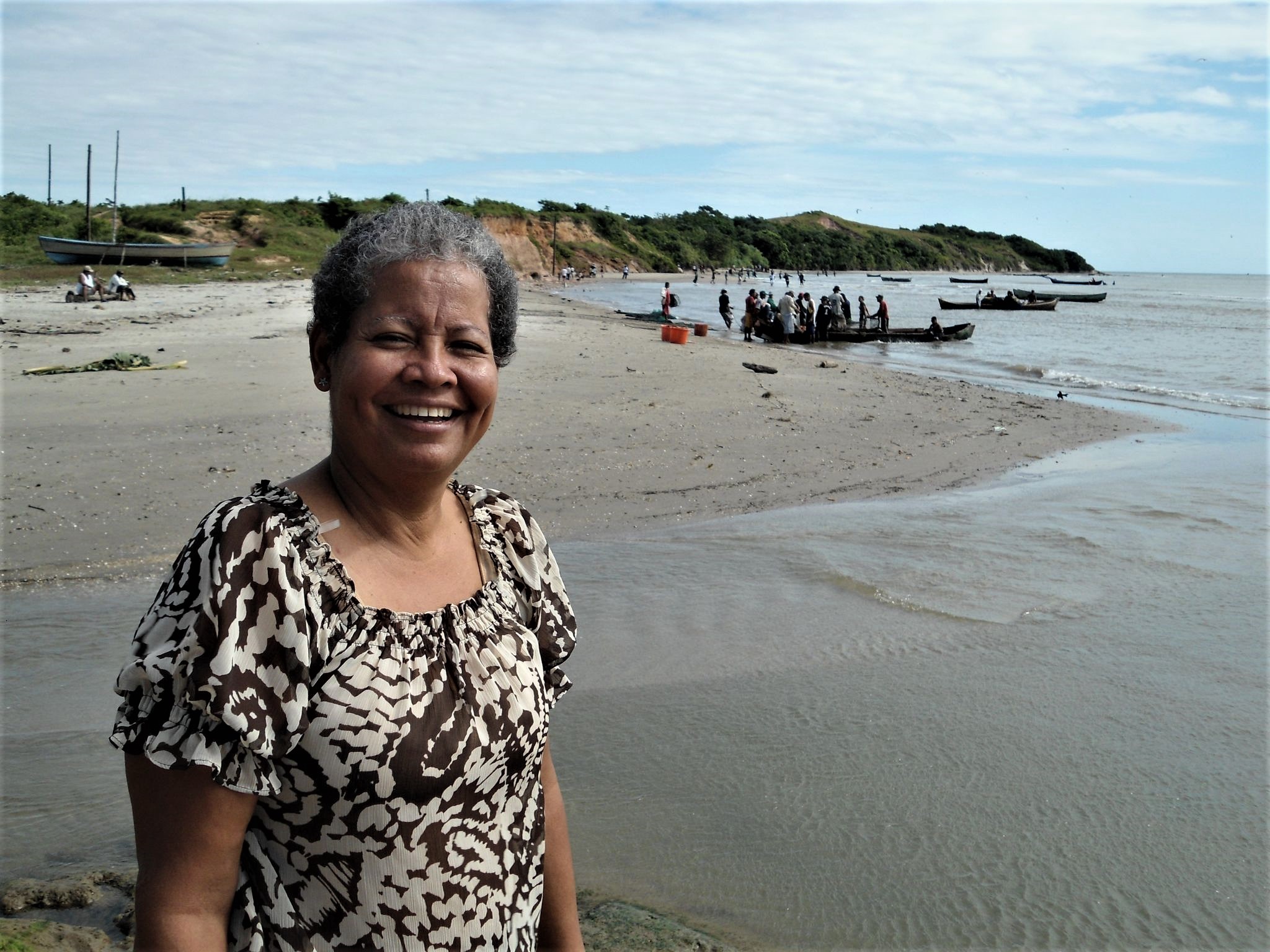 "Laugh, be happy, love in freedom, fly with two wings and don't attach yourself to anything." Juliana Francis Smith (Q.E.P.D.).

"I came to be happy, to love myself to love, to learn every day, and I try to teach and understand. Recognize the other being, equally."

The University Council of URACCAN, in use of the powers conferred on it by Law 89, Law on the Autonomy of Higher Education Institutions, and in accordance with its own statutes and internal rules, awarded the distinction "Forger of autonomy of the Caribbean Coast" to the teacher Juliana Ileana Francis Smith (Q.E.P.D.), as a postestum tribute to her admirable academic and community work , and to their struggle for the rights of indigenous peoples, mainly of Caribbean women.

The distinction was received by his sister, Gladis Kelly Francis, and given by the deputy deputy-chancellor of the venue, PhD. Eugenio López Mairena, who referred to Juliana as "a friend defender of the rights of people and mainly of other women". The emotional event featured the participation of the educational community and institutional representations, such as municipal mayor Claribel Castillo, who was a close friend of Juliana.

Castillo referred to Juliana with much feeling, as "a very intelligent woman, very bright; for those of us who knew her very closely and had the opportunity to work with her; what a great contribution he has left, we traveled places that many of you do not know, we traveled miles and miles away from New Guinea to do research."

"Juliana, from where she is, is looking at the tribute that her co-workers, her colleagues, her siblings, are doing to her," Castillo said, ensuring that "when Juliana died, many women cried, because in her they had a crumb, an advocate for women in this municipality."

Castillo ended up inviting the student to take an interest in doing a study on the life of this "formidable golden-hearted woman."

The dedication ceremony Forger of Autonomy had a space where the life story of the teacher Juliana was read, by her dear friend, the teacher Danelia Benavides, who built this story with Juliana and who, at the end of her emotional farewell said: "We hope that you have met your loved ones and as the light you went you can accompany with your energy to each one."

Who was teacher Juliana Francis Smith?

Juliana Ileana Francis Smith was born on February 18, 1961 in Bilwi, Puerto Cabezas, in the Lamlaya community. There he grew up and received his first teachings. She was the daughter of Richard Smith, a man of the Creole ethnic group (Q.E.P.D.), and Mrs. Elena Francis Dennis, a Miskite woman; hence teacher Francis identified he heeds hemselves as a bi-ethnic woman. She was the eldest of her 3 sisters, four brothers and mother of a child.

As a child she aimed to get ahead, she was never sorry to work to advance her education. He went out to sell fruits to guarantee some of his needs, such as attending class. He did his primary studies at the lamlaya community school and Rigoberto Cabezas in Bilwi. He later studied high school at Moravo College. With the triumph of the Revolution in 1979, she became part of the National Police, which allowed her to finish her studies in 1980 at the Bartolomé Colón Institute, obtaining her high school high school and as bilingual secretary.

In 1984 he traveled to Managua to study and work in the Ministry of the Interior and in 1990 he retired from it. In 1991 he graduated from the Bachelor of Education Sciences, in the English specialty, at UNAN-Managua.

By 1996 he began working at the University of the Autonomous Regions of the Nicaraguan Caribbean Coast (URACCAN), properly at the Las Minas campus, as a full-time English teacher and responsible for the scholarship student.

By 2000, the URACCAN New Guinea precinct required English teachers and in the face of the efforts of vice-chancellorship of this campus, teacher Francis was transferred to this municipality, where she served as a full-time teacher of English and Miskito.

Among his postgraduate studies we can mention: Research Methodology with a Focus on Gender and Interculturality; The Master's Degree in Gender Perspectives and Development, at the Central American University (UCA). She participated in the International Course of Women and Rights of Indigenous Peoples in the Inter-American System, which showed that every day she prepared and grew to work for the recognition of women's rights.

From 2002 to 2018 she coordinated the Center for Multi-ethnic Women's Studies and Information (CEIMM), where she served in the accompaniment and management of the Municipal Gender Commission for the care of victims of gender-based violence in a space where obligation holders, civil women's organizations and law holders converged. In addition, the management of municipal budget items for the work of violence prevention and attention was under his charge on behalf of the university.

He tirelessly managed funds to make URACCAN present in the fight against violence in the municipalities of El Rama, Muelle de Los Bueyes, El Ayote; and articulation agreements with the Women's House in Bocana de Paiwas, as explained in an article on the impacts of URACCAN-CEIMM on the accompaniment to these municipalities, published in the University Journal of the Caribbean, number 20.

She worked in educational consultancies and diagnostics, of citizen organization, of access to public information, such as gender diagnosis, in 2002, to identify the level of gender knowledge of the people of New Guinea. In 2004 he participated in the Human Development Report; from 2007 to 2008 she worked on the baseline on the economic situation of the women of the municipalities of New Guinea, El Rama, Muelle de Los Bueyes and El Ayote. In the same year she coordinated gender diagnosis at the Enmanuel Mongalo school and the New Guinean Gender Commission Systematization. He also carried out research such as Las Cadenas de Valor in Nicaragua (2004).

He also served in the area of research. In 2013, together with Eva Samqui, she concluded with the investigation "Daughters All, Mothers Some". In addition, she tutored studies at URACCAN, including: "Women's Participation in Productive, Reproductive and Community Activities in Zone 6 of New Guinea", "Access to Credit for Women of the Rio Plata Paradise Cooperative (Colonia Blanca Sandino)", in New Guinea.

Teacher Juliana has proven to be an example of personal growth, the first Miskite-Creole woman in a predominantly half-breed area, raising her voice to make visible the rights of multi-ethnic women who, because of sexist violence, are silent. A friendly hand for her sisters, for whom she has struggled to see them prepare and grow. A fundamental pillar for your child. A woman who collaborated with contributions to the knowledge of this house of study, but above all, the guidance of her own dreams, aspirations and goals.

When teacher Francis was asked what her accomplishments had been, she responded; "My greatest achievement has been to complete my studies, to have my child and to be part of the URACCAN family, to contribute to the change and transformation of a more just and equitable society from the education system."

"I came to be happy, to love myself to love, to learn every day, and I try to teach and understand. Recognizing the other being, equal with learning processes, recognizing God within us makes us one from diversity and difference. Telling him I love you very much. Say 'laugh, be happy, love in freedom, fly with two wings and don't attach yourself to anything.' It's all learning."

Juliana Ileana Francis Smith completed her mission in this life on December 2, 2019. The distinction "Forger of autonomy of the Caribbean Coast of Nicaragua", with which URACCAN distinguished the teacher Juliana Francis, states in its plaque that it is due to the implementation of her knowledge, spirit of effort, sacrifices, identity, loyalty, creativity, solidarity, sensitivity, social commitment and institutional articulation in the construction of a better life of peoples through the strengthening of the regional and country regional regional system.