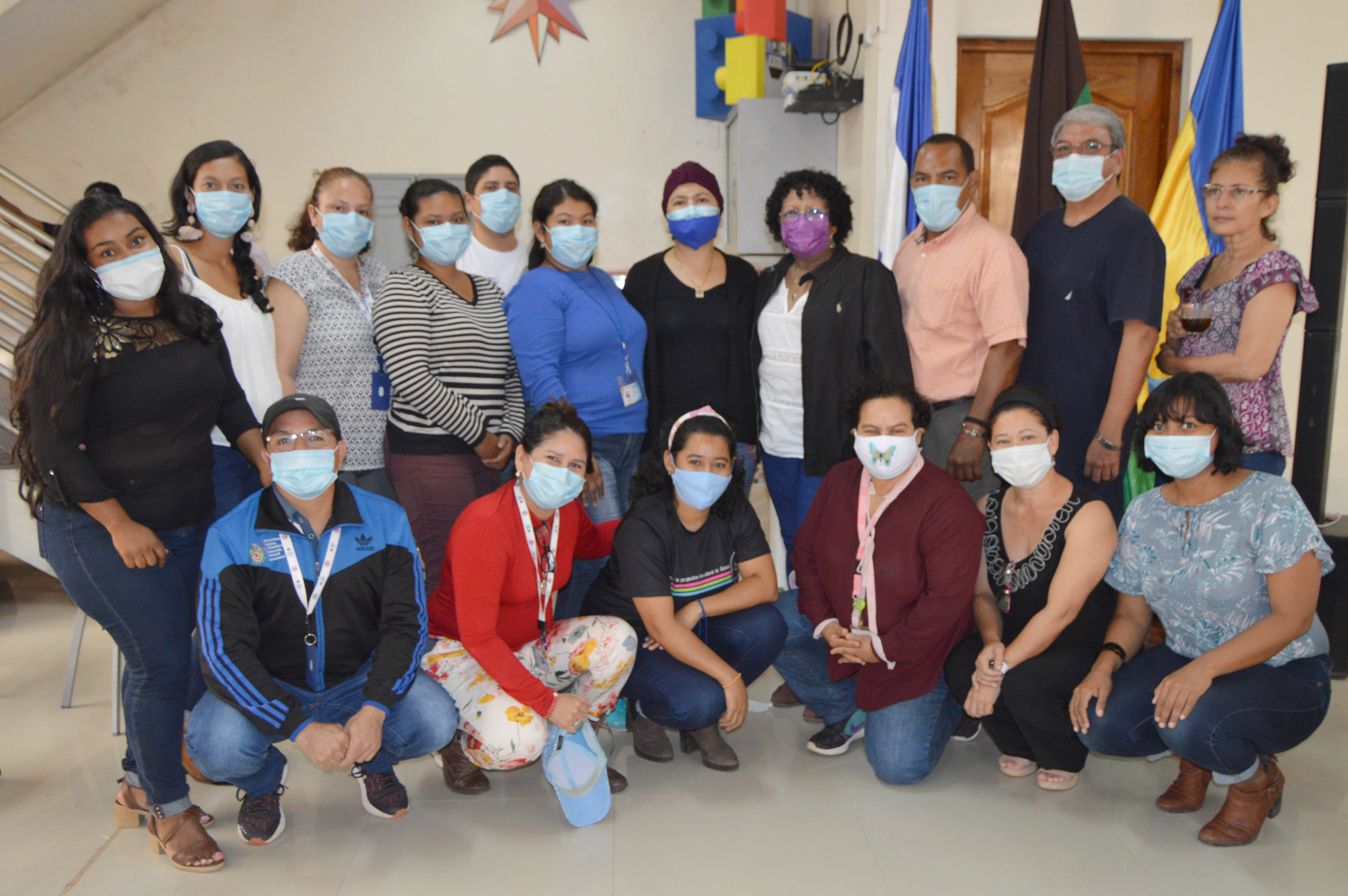 Dr. Alta Hooker and the authorities of URACCAN Bilwi campus carried out an activity to dismiss the delegation of psychologists, psychologists and infrastructure specialists from UNAN-Managua who arrived since last week to support the reconstruction of campus facilities and, in addition, to assist the university community in mental health after the passage of the two hurricanes Eta and Iota.

Dr Hooker thanked the two brigades for attending URACCAN's call, "it really was a sharing, a solidarity, a collaboration that we could say 'unique'". The rector of the First Intercultural Community University in Latin America also said that for 13 years she was not shared in an encounter with specialists in psychology, the first time, was when the passage of Hurricane Felix, and now with these two hurricanes and the duel that has caused by the Covid-19 pandemic.

"We have been carrying trauma after trauma, swallowing the different situations, (...); The coming of you here for us has been of many benefits, but also, what has impressed me the most has been the speed of approval of your mobility that we had in asking teacher Ramona (rector of UNAN) for help,(...); these things are not always seen, that brotherhood, and solidarity with the collective, especially I really liked, that things happened that way, because we are members of the National Council of Universities (UNC) and the reaction was so quick with the Caribbean, that the rectors and rectors of the UNC came, and the guilds to visit us, to see how we were in our homes and the conditions in which we were , his appreciation, his solidarity, his appreciation, his affection, 'thank you wholeheartedly for coming,'" Hooker said.

For his part, Enrique Cordón, PhD, vice-chancellor of the Bilwi compound, also appreciated all the accompaniment provided by the two delegations. "We all need psychosocial accompaniment, it's not because we're crazy, but because at some point we need to balance our emotions, our feelings and put them on track with the work and life we've led," he said.

Delivery of evaluative reports by the delegation of psychologists

Mr. Leslie Torres, head of the Psychology delegation, said that the whole brigade felt very welcome throughout the university community, "we have been working, coordinating with teachers, with colleagues such as that if they were from UNAN-Managua, we have felt fully identified, not only have we coordinated, but we have learned from the culture here from Puerto Cabezas, from the Caribbean Coast , especially spirituality, which is fundamental in human beings and love of nature."

The brigade presented and delivered to the URACCAN authorities the report on the attention they made during all these days on the university campus; it was three types of activities that they carried out on the premises: psychological care individually, group workshops aimed at teachers and administrative workers, and finally workshops aimed at internal and external scholarship students.

"In the psychological consultations we planned to hold 34 individual sessions and we exceeded the goal and we held 37 sessions, there practically 9% more compliance, in the workshops with students we had 6 workshops, we had planned according to the planning of students who were going to attend 131 and attended 134, in the workshops with teachers, we had planned 5 workshops, the 5 were held and 89 teachers and administrative staff were going to attend , in this case the presence of them decreased because only 50 people attended, in that case, with teachers and staff we met by 56%," Torres said.

In addition, Mr. Miguel Sirguia, coordinator of the Infrastructure Commission of UNAN-Managua, stressed that the arrival at the Bilwi campus was intended to support two main activities: the construction of a pavilion that would provide the necessary conditions in the face of any eventuality caused by Mother Nature, "a typical building of classrooms for the university", in addition to doing the lifting for the projection of the growth that is expected to have in infrastructure in the future the university.

The engineer explained that the two activities proposed during this week were fulfilled, "only a few details remained, but the typical detail of the designs, both structural, architectural and the electrical of the buildings, is ready," he concluded.