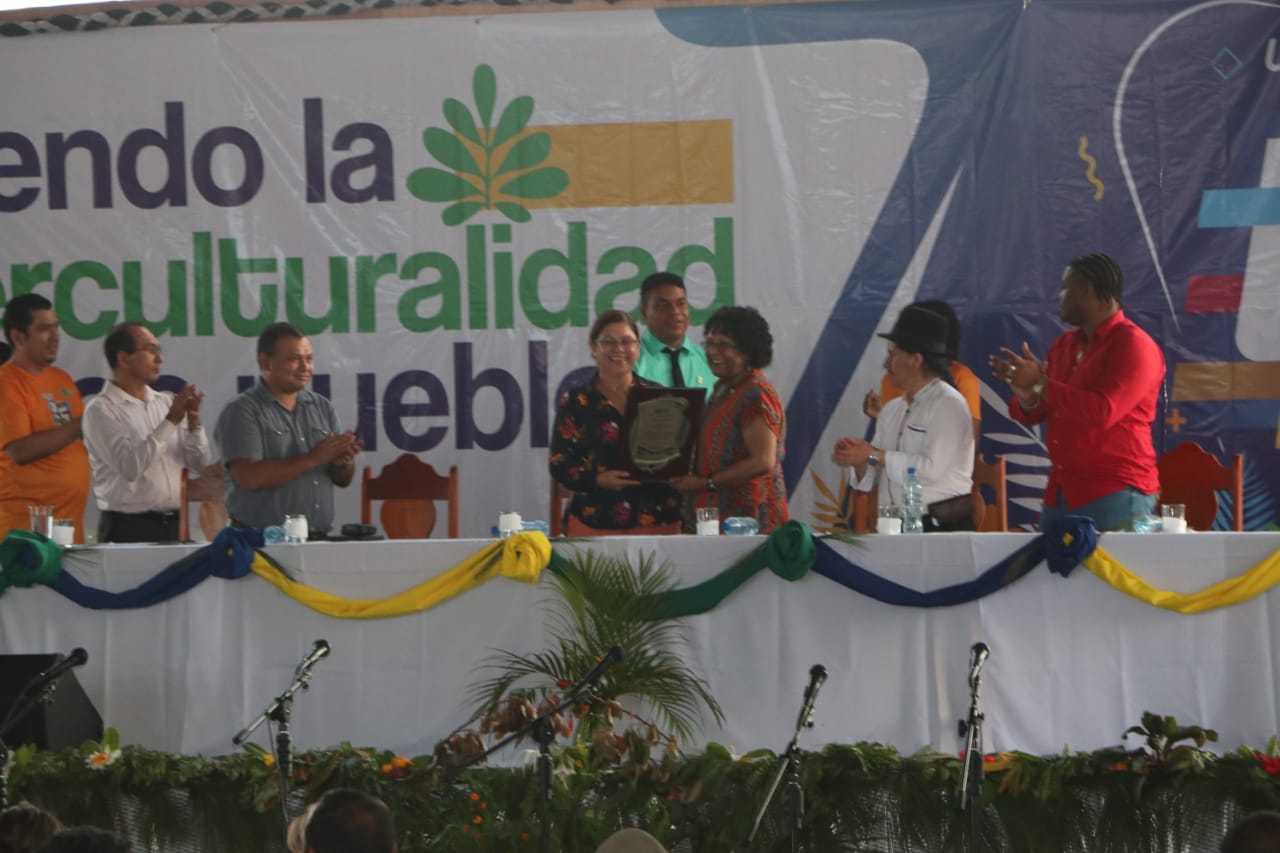 A holistic view from the UNC

As part of the celebration of the XXV Anniversary of the First Intercultural Community University in Latin America, URACCAN, the president of the National Council of Universities (UNC), Dr. Ramona Rodríguez, presented a keynote lecture on the importance of 'Community universities and their contribution to the holistic vision of the UNC and to the construction of development with the identity of the country".

Dr. Rodríguez began her presentation by greeting all representatives of local, regional, national and international institutions, organizations, councils, universities and representations that celebrated the 32nd Anniversary of Regional Autonomy and the 25th anniversary of URACCAN.

A historic milestone for the country

To continue, the UNC president mentioned the importance of the birth of autonomy for the Caribbean Coast and for the country, "32 years ago she marked a milestone in Nicaragua's history, especially for the peoples of the Caribbean Coast; today we can count achievements in the field of health, education, family prominence and identity strengthening," he said.

In addition, the academic recognized the link and importance of Regional Autonomy for the birth of URACCAN, recognizing that URACCAN has paid significantly to the Autonomy and peoples of the Caribbean Coast. "It is 25 years of contributing to the improvement of the quality of life of the Nicaraguan population, particularly on the Caribbean Coast, making the dreams of men and women with identity of the region a reality, through the training of professionals, both at the undergraduate and graduate level and through research and the multiple tasks of extension and projection that they perform together with the community and from the community" Continued.

In this regard, Dr. Rodríguez emphasized the presence of intercultural community universities in the National Council of Universities, describing them as a strength for the UNC, arguing that she will coniverte it in a participatory and diverse space, "From my perspective, it is a diverse collegiate body, with a comprehensive and intercultural vision of Nicaraguan Higher Education, committed to the quality of university education , from a people-centered vision, ensuring the restitution of rights to an education for all," he said.

In addition, he explained that from this space interculturality has been worked on and assumed as a dynamic of life in Higher Education, which allowed a better relationship and inclusion, with a holistic vision, becoming part of this subsystem that promotes formative processes aimed at joint construction. "These are difficult times, but I think there is a revival that Nicaraguans affirm and invites us to maintain and strengthen the unity of all," he said.

Moving towards the Good Living

In addition, the professor highlighted the processes of community universities aimed at promoting the good life of peoples, "We have to achieve good living through education, and in particular in the university, learning and understanding that we have cultural wealth in the two regions of our country and particularly on the Caribbean Coast, where there are feelings, knowledge and does that we must generalize so as not to collapse as a human species" Assured.

Continuing, Dr. Rodríguez enhanced the presence and inference of community universities in decision-making spaces, recognizing that through her authorities, leaders and leaders the advice, proposals and signs to incorporate in Nicaraguan public policies are received, both for educational, social and economic aspects, "Because we must learn to recognize and respect each other and respect each other , to accept us as legitimate others," he added.

In addition, the PRESIDENT of the UNC referred to the declarations of the Fourth National Congress of Nicaraguan Higher Education and the Regional Conference on Higher Education (CRES 2018), where the issue of interculturality and its promotion in all instances and spaces of Higher Education was addressed, assuming and promoting an involvement of all.

"Universities in the country must drive institutional structural changes with new management tools and methods, making indigenous and Afro-descendant peoples visible, their history, worldview, rights, language, emphasizing the pursuit of socio-educational equity from an intercultural and gender perspective," Rodriguez said.

Finally, the rector of Unan-Managua, congratulated and appreciated the contribution of URACCAN, during her 25 years to the Caribbean Coast, the country and Higher Education, highlighting efforts and proposals to strengthen, "I also take the opportunity to make a recognition of the joint work that URACCAN is doing with Unan-Managua in the construction of a diploma in interculturality, which we will start in the coming months" Referred.

"It is a challenge that we must take on and that today we have many strengths, our rector Alta Hooker, leads the RUIICAY Network and has been working in this regard and also, it is an issue that has also been discussed since UDUAL, how to create our own quality standards that allow us that comparison. We need to continue working on this issue, we need to continue to drive it, we need to make a difference," Dr. Rodriguez added, referring to the interculturalization of Higher Education.

Concluding her speech, the academic expressed her warmest congratulations to URACCAN for its anniversary and for its model of Intercultural Community University "Congratulations again to the university community of URACCAN, successes in all the actions that they undertake and that we undertake together and together, congratulations URACCAN, our rector, her authorities, for being promoter of a new philosophy of life, which is strengthened by the dialogue of feelings , know and do, because we merge reason and heart," he concluded, adding "My congratulations on behalf of the UNC, our recognition of URACCAN for shining peoples' feelings in this celebration."