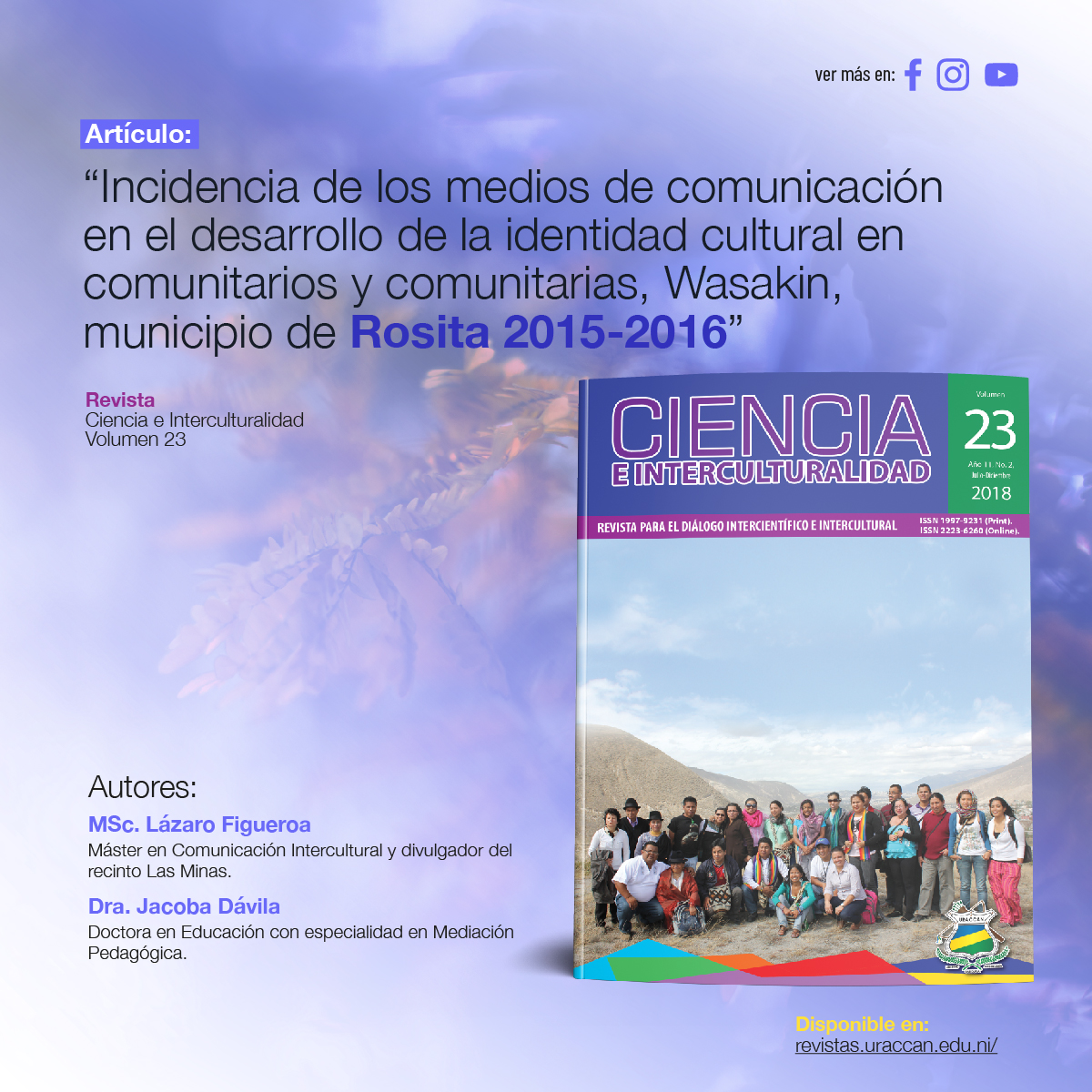 This research is an important contribution to the cultural rescue of the Mayangna population of Wasakin.

"The customs and traditions of the Community of Wasakin, of the municipality of Rosita, have been transformed over time, from their forms of organization such as replacing their mother tongue with miskitu."

Elders, elders, leaders and leaders of the Wasakin community were the protagonists of the research entitled "Impact of the media on the development of cultural identity in community and community, Wasakin, municipality of Rosita 2015-2016", developed by Lázaro Ramón Figueroa Reyes, Master in Intercultural Communication with Gender Approach, and Jacoba del Carmen Dávila Molina , PhD in Education with specialization in Pedagogical Mediation. This work was published in the Journal of Science and Interculturality, in volume 23.

The research focuses on highlighting the media's impact on the cultural identity of the Sumu-Mayangna tuahka indigenous community in Rosita Municipality, in the North Caribbean Coast Autonomous Region, taking as a starting point the sociocultural context and aspects involved in identity.

The importance of this research work lies in the influence of incorporating technological advances in the media and its relationship with new ways of perceiving different cultures in the same peoples; therefore, evidence, its advantages or disadvantages, as a result of the customs and traditions of each community.

Figueroa Reyes and Dávila Molina used a methodology based on the Cultivation and Breeding of Wisdoms and Knowledge (CCRISAC), which is a research paradigm that originates in the Network of Intercultural and Community Indigenous Universities of Abya Yala (RUIICAY), of which URACCAN is part and which is coordinated by its rector, Dr. Alta Hooker.

Within the paradigm indicated, URACCAN has its own research model, which consists of the Creation and Recreation of Knowledge Known and Practices through Intercultural Action Research.

This methodology served to observe the context and problems they face, which cannot be differentiated in a single moment. In addition, realities were perceived to support and inform the experiences of communities that feel included and identified when taken into account in citizen participation processes. In addition, it was carried out through participation tools such as "etymological tracking, conversational, coexistence and participating observation".

The results presented in this important research show that there is a crisis in the identity of the Wasakin community, since over the years it has increased its ethnic diversification, mixed with miskitus and half-breeds, even no longer communicate with its mother tongue, sumu-tuahka, and have replaced it with miskitu.

It also exposes the disrecognise of Law 445, which consists of the communal ownership regime of indigenous peoples and ethnic communities, so the invasion of settlers and the illegal sale of territory remains a problem for the region.

This study also reflects the conflicts that have arisen in the community, due to poor communal government, which has no experience, nor the wisdom with which the council of the elders was headed. The customs and traditions of the Wasakin community have been devalued by external practices, by the negative approach with which politics, globalization and the media have been managed.

The media impact has gradually impacted the Wasakin community, specifically television, which through its screen shows different ways of acting as young people from potential countries, which young people in the community then want to adopt, which affects their ways of life, as it interferes with their responsibilities.

Another of the main results of this research states that advertising has drastically affected cultural identity, as young people want to follow the fashion they show from other places, which has meant a prevent for cultural rescue.

Even advertising has influenced the gastronomy of the people of Wasakin, because they buy cold cuts, sodas, frescoes made from tang, branded shampoo such as Head Shoulder and Dove, products that are presented in television advertising, and not those made by people in the community, which are made from herbs or other natural products.

This research is an important contribution to the cultural rescue of the Mayangna population of Wasakin, because through the same voices of its inhabitants seeks to strengthen and live life customs and traditions, focused on their cultural practices for the good life of peoples.