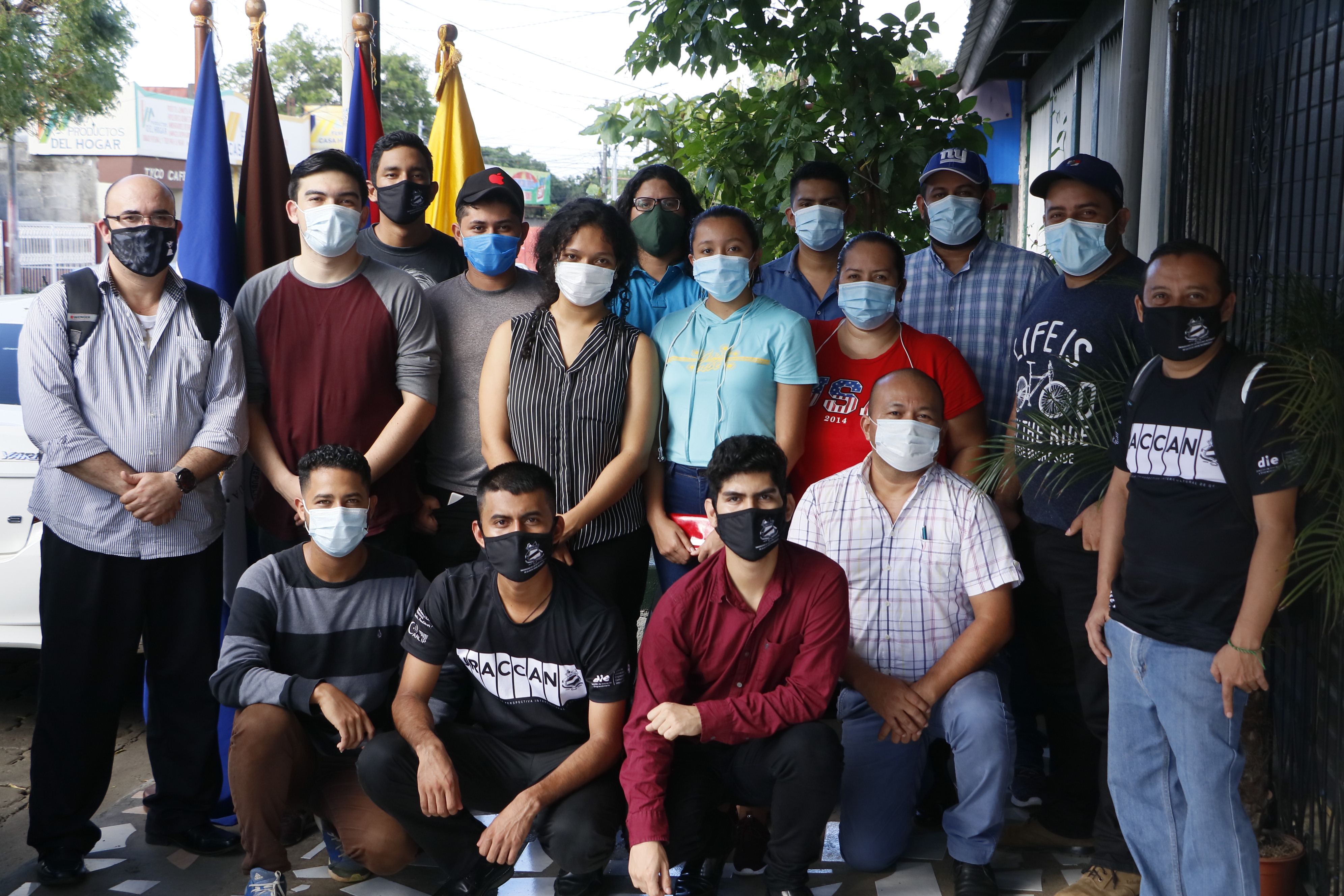 URACCAN students with the teaching team delegated by Dr. Alta Hooker to accompany them throughout the process.

Students from the New Guinea venue representing URACCAN at Hackathon Nicaragua 2020 entered this morning the Olof Palme Convention Center in Managua, where they will remain for 48 hours, working tirelessly on their technological proposals, through which they hope to win this national competition, with the best of attitudes and an innovative spirit. Our prayers and best wishes for these formidable boys and girls!

These young talents are participating in two teams (of five members each) and two different categories. One of them is called URATECH (which combines the name URACCAN with the word technology, honoring the culture of technological innovation that drives this university among its students) and competes in the category "Advanced".

The other team was named URAHEK, which also combines the name of their university, which they always express proudly, and the initials of the names of their members, who compete in the "Junior" category.

Master Marlon Peralta, who is general mentor of URACCAN in Hackathon 2020 and director of the Information Technology and Institutional Communication System (SITICI), recounted that both teams would initially participate in the Junior category, but that the jury of the past Ideathon (October 27) valued URATECH's proposal as very innovative and of high quality, for which they promoted it.

These teams, who participated in Brainstorming (where their projects were born) advanced to ideathon (where they nurtured and shaped them) and qualified to compete in the Hackathon (where they will present their final product, materialized), have been permanently accompanied by a group of URACCAN teachers, delegated by Dr. Hooker for this commendable work, led by Master Peralta, Master Holman Rojas , coordinator of the area of Innovation and Entrepreneurship, and teacher Jancy Moraga, coordinator of Educational Technology.

Seyling Romero, of URATECH, explained that his proposal consists of an interactive web application that will allow high schoolers to carry out a vocational test, based on whose results, the internet user will be able to know which career best suits their profile, offering options in the universities that offer it. This innovative project has many other components, in which the students of URACCAN Nueva Guine are working, where Systems Engineering, Intercultural Communication, Graphic Design and Marketology are complemented.

For his part, Hanier Morales, of URAHEK, explained that his team's project, also interdisciplinary, is called Nicaturismo and consists of a mobile application that will show tourist sites (and offers), with an emphasis on the promotion of small businesses, in order to contribute to the strengthening of the local economy.

Master Rojas assured that, having reached this stage of the competition and having developed their technological innovation projects, "our students are winners and fully trained to do their best and proudly represent URACCAN and the Caribbean Coast."