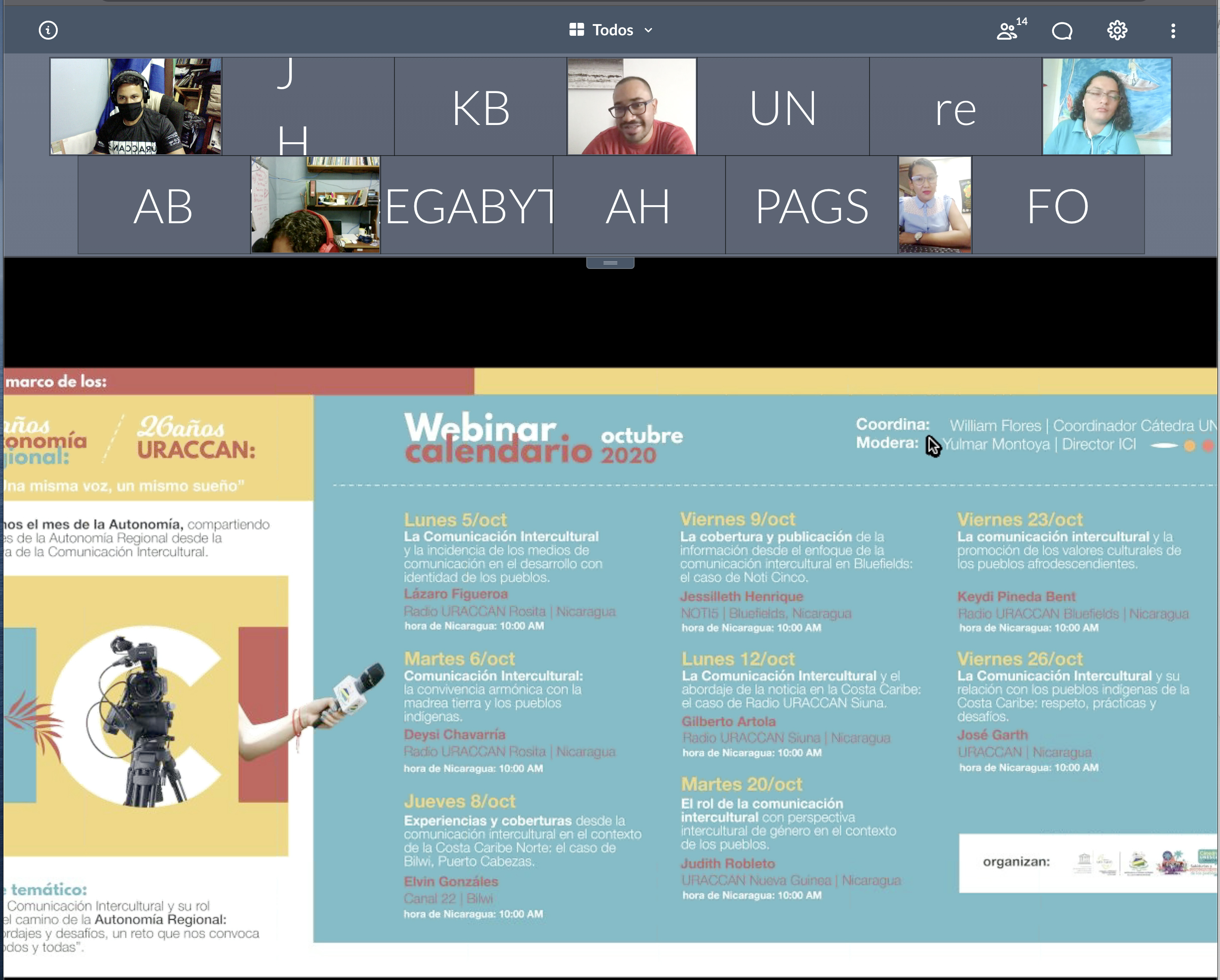 Teacher Chavarría conducted her master's research on the Sumu-Mayangna community.

Community radios as an area for the promotion and defence of the rights of indigenous peoples.

The second webinar of the cycle organized by Rectory of URACCAN, through the Institute of Intercultural Communication (ICI) and the UNESCO Chair, was held this morning, with the theme "Intercultural Communication: Harmonious coexistence with Mother Earth and indigenous peoples", presented by teacher Deysi Chavarría, who shared her experience on the defense and promotion of the rights of ethnic communities on the Caribbean Coast.

Chavarría is an intercultural communicator of Radio URACCAN Rosita, from where she has lived with different ethnic groups, which has allowed her to understand her conceptions of the world. Hence Deysi gives us a new perspective of intercultural communication, in the light of which the communicative act from the original peoples represents a deep connection with the elements: the forest, the river, the animals...

Intercultural communication therefore implies, according to Chavarría, the ability to harmonize, to understand the other person and his link to nature, even if there are no common characteristics and languages are totally opposite, overcoming any prejudice created by society.

"Interculturality occurs with bare feet on the ground."

In Westernized societies it would be impossible to understand a human being capable of communicating with the sea, with trees; to interpret dreams; to enter into dialogue with their ancestors. The influence of the West and its globalizing processes have taken effect in Latin American countries. For this reason, master Chavarría ensures that intercultural communication is about feeling, rather than rationalizing. "Interculturality occurs with bare feet on the ground," he says.

Radio communicator URACCAN Rosita conducted her master's research around the Sumu-Mayangna community, which is based next to the water sources of the North Caribbean and whose philosophy of life derives from its connection with nature, from which food comes and the sense of existence.

However, throughout her dissertation, the teacher raised the threatening advancement of globalization, which jeopardizes the culture, traditions and languages of indigenous peoples. In this sense, the moderator of this activity and director of the ICI, MSc. Yulmar Montoya, emphasized the importance of a role played by Radio URACCAN Rosita in the territory, because as a community broadcaster it projects indigenous and Afro-descendant pride, as well as its own cultural and linguistic values.

Through its programming, URACCAN's community radios strengthen the autonomy of indigenous peoples and promote regional development with identity. At this point, and finally, Master Montoya explained that this activity, like others that are scheduled for October, commemorate the 26th anniversary of URACCAN and the 33 years of Regional Autonomy.