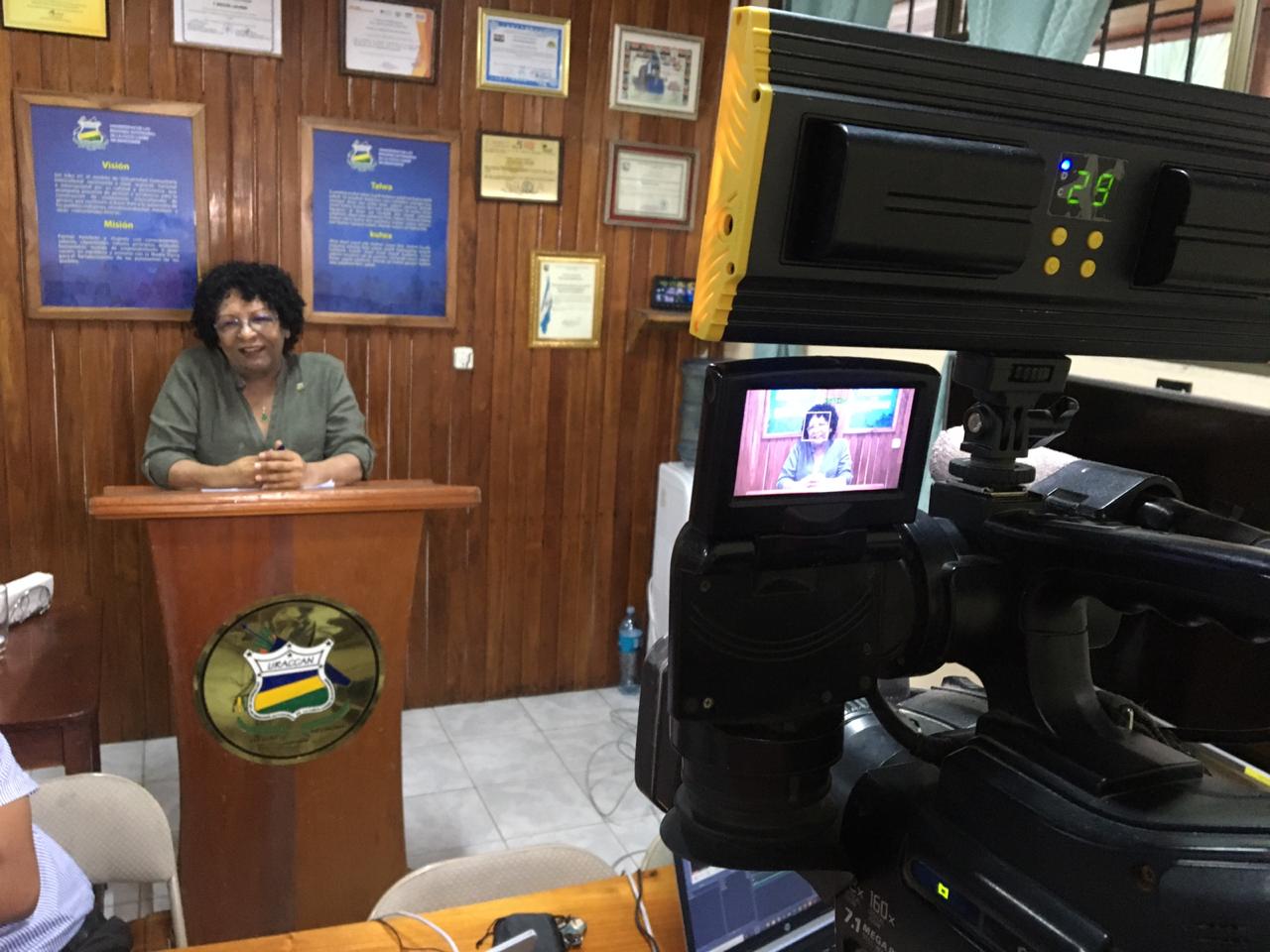 Dr. Alta Hooker, rector of URACCAN, during her dissertation at 4:00 p.m.

Reflecting on the pandemic in multi-ethnic contexts

Dr. Alta Hooker, rector of URACCAN, participated this afternoon as a special guest in a videoconferencing cycle promoted by the Union of Universities of Latin America and the Caribbean (UDUAL), where she lectured on "The pandemic from an intercultural perspective and gender roles", in the context of COVID-19 and its approach from the realities of indigenous and Afro-descendant peoples.

Dr. Hooker began her conference by alluding to the multi-ethnic, multilingual and multicultural wealth of our country, where the two Autonomous Regions of the Caribbean Coast represent 52% of the national territory and where six ethnic groups live, among indigenous, Afro-descendants and mestizas.

These territories, according to the rector of URACCAN, enjoy an ancestral collective memory, of common experiences rooted in the worldview of the earth as a common good of the peoples who inhabit it, from which comes the meaning of their existences. These communities, the illustrious speaker pointed out, start from the "past to live the present and plan for the future" and their connection to nature, so they "talk from diversity, because they are part of it".

Health models on the Caribbean Coast

Dr Hooker's explanation of how the COVID-19 pandemic is being addressed from the original peoples was based on the description of health models that are active in the Autonomous Regions. On the one hand, the Caribbean territory works according to the Model of Family and Community Health promoted by the Government, since this Intercultural Community University coordinates actions with the Ministry of Health to address various problems in the region.

In view of the multi-ethnic context of the Caribbean Coast, the rector of URACCAN emphasized the Intercultural Health Model promoted by the Caribbean Coast, which is based on communication, solidarity and complementarity with the different community leaders to provide comprehensive responses to the health problems presented there.

In this sense, URACCAN, from the Institute of Traditional Medicine and Community Development (IMTRADEC), has met with territorial leaders, midwives, pastors, traditional doctors, among others, to plan actions for the possible spread of coronavirus in the area.

Although there is no reported case on the Caribbean Coast, URACCAN has been working on a health management and care plan for indigenous and Afro-descendant communities, articulated with government authorities and addressing the spirituality of these peoples.

As previously raised, Dr. Hooker emphasized the relevance of traditional physicians for the prevention of the reported and viral disease, and the transcendence of the connection of indigenous peoples with nature, from which life, strength and the healing process are born.

Studies have been conducted since IMTRADEC showing that people living in Caribbean communities and municipalities first turn to traditional doctors arlier than to the public health system. That is why the speaker echoed the exhortation of ancestral doctors: return to Mother Earth and grow medicinal plants for the treatment and care of diseases, flus and other complications.

People's conception of the pandemic and other viral diseases

Rector Hooker noted that for indigenous and Afro-descendant communities, COVID-19 is the result of the imbalance in relations with nature, where there are good and bad spirits, convened by traditional doctors of different ethnic groups depending on the disease and the treatment it needs.

IMTRADEC has developed meetings, workshops and talks with territorial leaders, where great concerns have arisen. According to Dr Hooker, they have many gaps in the situation: "what to do with isolation or shelter in their homes", which have no divisions and families have a different system of life than other areas of Nicaragua.

They also wonder how to carry out mourning, how to say goodbye to the elderly, who maintain spirituality in the community; how to keep the community healthy if any contagion arises; how to get the spirit to rest and be summoned and continue to lead spiritual life.

Faced with all this emergency and the various health problems that still affect indigenous territories, the rector of URACCAN argued that this Intercultural Community University keeps active the channels and mechanisms of participation, where there are self-help groups, home health models, coordinations with MINSA, regional health councils, inter-agency planning.

To conclude her reflections, Dr. Hooker assured that it is necessary to prepare to build new paradigms that can solve old and current problems, as well as listen to others and make consensual proposals, linking the spiritual, with science and practice, in harmony with Mother Earth.

Health equity, concluded by the rector of URACCAN, is achieved to the extent that the peoples concerned themselves become relevant actors in decisions that affect their lives, respecting the principle of universality, the participation of women and men on an equal footing.

Having concluded his dissertation and given the many reflections and concerns he generated among the audience, the moderator of UDUAL considered it necessary to open a space for questions and answers. One of the most "capcious," according to rector Hooker, was geared towards her experience as rector of URACCAN, on "how to manage stigma and discrimination between indigenous and Afro-descendant populations in relation to COVID-19," to which the illustrious speaker responded wisely:

"In the case of indigenous and Afro-descendants, we have the great advantage of living in Autonomous Regions and having a Law of autonomy that allows us to manage our territory.

Often stigma has to do with a lack of knowledge about our culture and our way of living life. That is precisely why URACCAN is considered "Daughter of Autonomy", we respond to Autonomy. That is why we have intercultural communicators who denounce for everything that is not right and fight for the rights of peoples.

Afro-descendants have been extremely proactive in the fight for our rights. At the moment we have Afro leaders in the highest spaces of the country and we are working on articulating all those rights that are immersed in all national instruments.

With COVID-19, we can say that discrimination is not just against Afros, it is against whoever coughs, who gets in the way. The issue of discrimination is sensitive, but we must analyze it in each of its nuances.

Therefore, one of the best things that could have happened to us are the Intercultural Community Universities, because they allow us to design our own proposals, but in turn negotiate them from our own vision and our own philosophy.