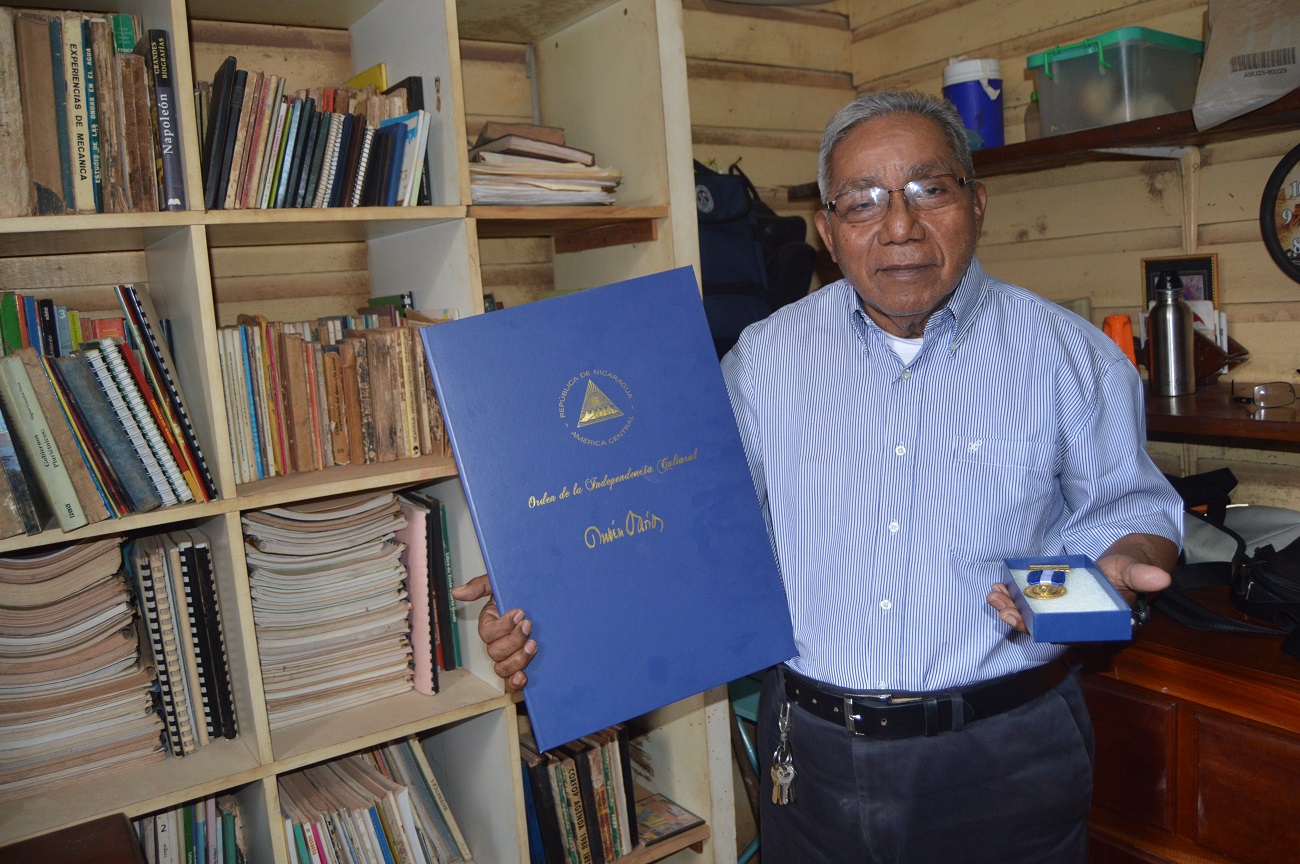 23 years of teacher in URACCAN classrooms

Teaching has been one of his best decisions in life, said Professor Alejandro Torres Raudales, who last Tuesday, February 11, received from the President of the Republic Daniel Ortega, the Order of Cultural Independence Rubén Darío, recognition given to the best teachers in the country.

Torres began teaching in 1977, "I started as an empirical teacher, however, I cannot ignore that I had already obtained 8 years of service doing my logistics work in the office of the municipal delegation of Waspam, at that time I started, the offices were a pilot project of Informed Education, which was a program that was aimed at teaching in Spanish children from Cabo Gracias a Dios to Santa Isabel" Told.

He also recalled that when he started with these tasks, he was just 11 years old, "I appear with 58 years of service because I won one more year by participating as a technician during the National Literacy Crusade in 1980 under the area, number 2 including schools ranging from Laguna Tara upstream to Raiti," he said.

In this arduous work, Professor Torres has 59 years of working with the Ministry of Education and 23 years of working for the University of the Autonomous Regions of the Nicaraguan Caribbean Coast, (URACCAN), in his Bilwi Campus.

This outstanding teacher of generations, also 9 and a half years with INATEC, 5 years with the Colegio Niño Jesús, 5 years with the Juan Amos Comenius Jack College, "not counting other extra works that other schools asked me to do was mathematical" Said.

About your education process

After sorry for five months teaching primary education at Morava Church, because there were no school facilities in the Community of Ulwas, Rio Coco "sent me to Leymus School, Rio Coco, where I was responsible, being responsible, on June 10, 1967, Professor Ramón Libon, who was the director of the pilot project at the time He sent me to call to inform me that I was going to pursue my studies at Franklin Delano Rusbell Normal School in Jinotepe, Carazo," Torres memorized.

Thus he graduated from Secondary Education and Professor of Primary Education in 1969 "by that time it was a mixed graduation that was coincidentally on December 08, 1969", and Torres recounted that they still keep alive friendship with their ex-workers who 50 years ago graduated as bachelors in Jinotepe, Carazo.

When I left the Normal School, Professor Alejandro maintained the idea of continuing his university preparation, "of course, as I was in Rio Coco, I was just the third or fourth graduate teacher, I began to take advantage of different roles in the delegation, as director, assistant inspector (in charge of training and advising the other teachers and principals)," he specified.

According to the teacher in 1976 they developed the professionalization course, organized by UNAN-Managua in Puerto Cabezas, "I only said goodbye to my family in Rio Coco and came to study at Bilwi, the last course that offered this university was the one that was held in 1979, that allowed me to have managed to approve 63 credits", narrated Torres.

From that moment on he thought about the possibility of teaching high school, because the course was to be Middle Education Teachers, even if he had not completed it in its entirety.

In 1979, he was appointed as a professor of mathematics, at the Institute of September 11, with the process of revolution the project of that school stopped, but, "on August 10 I received a letter from the departmental manager from Bluefields where I decided that if I could support them with the educational work there, we asked him to attend to area number 2 that goes from Lagun Tara to Rayti again" Torres said.

"In 1986, through the meetings held by MINED and ANDEN, as we participated in those meetings, we raised at a meeting where Dr. Mirna Cunningham, then Head of regional government, was at a meeting, who had already obtained certain credits at UNAN University, who would give us a chance, then, they got us budgets with NORAD , and we were able to take out a teacher of Middle Education, that was called Average 1, finishing that, I came out as a teacher of Middle Education in Education Sciences with mention in Mathematics, after several courses I went out as a Bachelor of Education with mention in Mathematics at URACCAN," Torres said.

His steps as a URACCAN teacher

Master Torres began teaching at the University of the Autonomous Regions of the Nicaraguan Caribbean Coast (URACCAN), at the Bilwi campus from January 20, 1997 as a schedule teacher, and at the beginning of the second semester he was appointed as a full-time teacher for the specialty of mathematics.

"My experience as a teacher has been beautiful, beautiful, because I was able to see how young people learned, what methods they are applying and as we are researching according to the curricular changes that were taking place in the Ministry of Education and also in universities, that allowed me to expand and update, so that already when I retired in 2018 , and my classes gave them on the virtual platform," Torres lied.

Decorations received for their teaching duties

The teacher Alejandro Torres with his vast work experience has obtained recognition for his good work and performance as a teacher, among the most remembered by the teacher are those received in 1986, "I was given the medal of an exemplary worker, in 2002 I was given the Order Doris Robb Gabay by URACCAN, in 2010 My Family (Ministry of the Family) , gave me the encouragement of an exemplary worker, they wanted to tell me in other words that it was an exemplary relic," he recalled.

In this context, Torres, commented that URACCAN paid him a special tribute in September 2016, "they gave a recognition, a diploma where they recognized my work as a teacher, then on October 01, 2016 I received from the President of the Republic

His family a fundamental pillar in his daily walk

Alejandro Torres Raudales, married to Mrs. Mery Law Thomas Muller, who procreated six children, the eldest is Tessia Olga, Alejandro Estanislao, Tesio Otulio, Alexa Florence, Tewin Fernando and Dalieska, all have been trained professionally, some with great positions in the institutions of the state and others as teachers of the university.

There is no doubt that the example of perseverance and discipline on the part of the teacher Alejandro Torres, achieves an important legacy for the Caribbean peoples, especially for the student generations, both in primary, secondary and university education who had the opportunity to receive the teachings and knowledge from the teacher.

Torres said: "The experience at URACCAN has been excellent, because I learned the new methodologies and university orientations, that means I received a series of trainings from the university, on interculturality and on the use of the virtual platform," the teacher concluded.