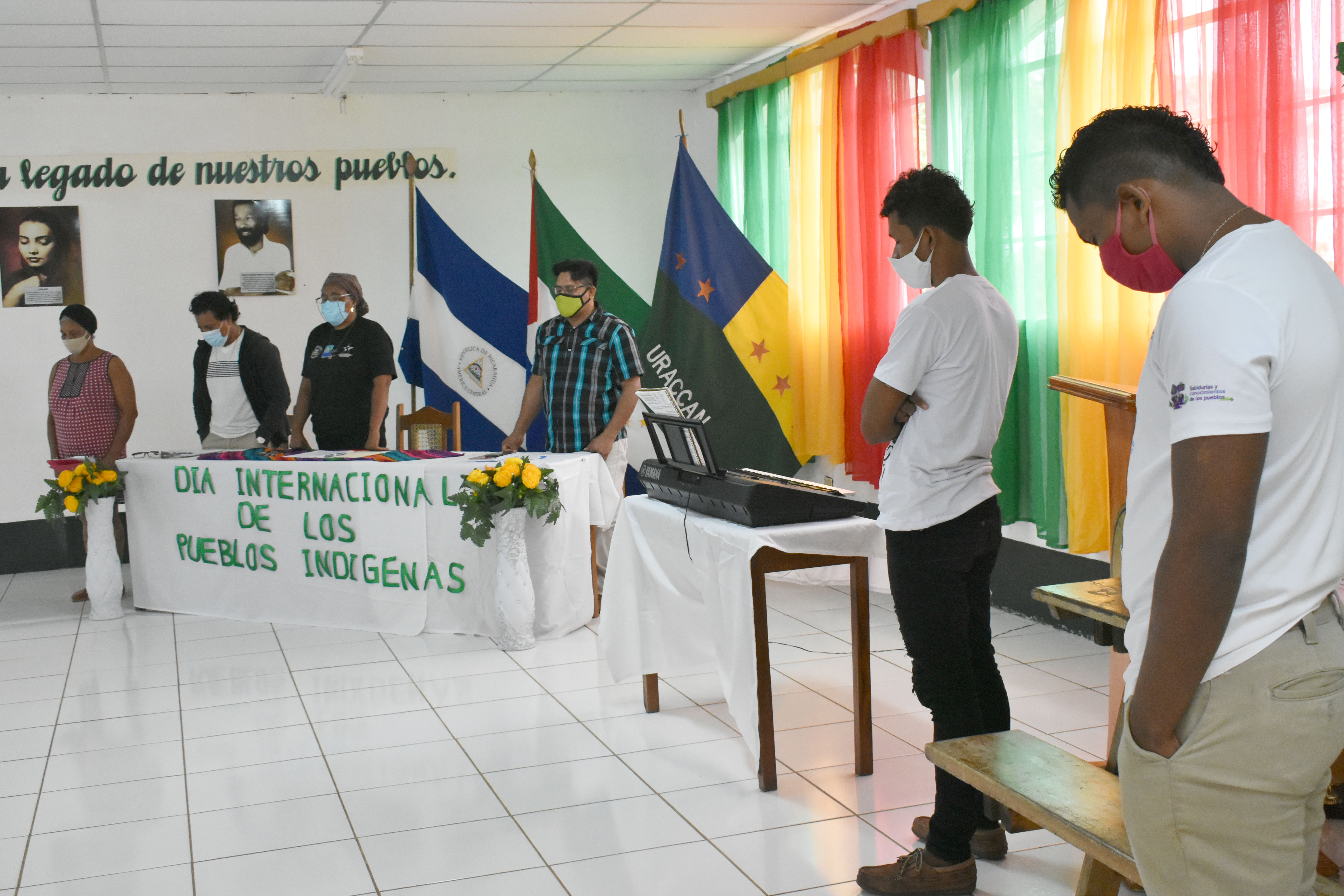 The panelists of the conversation, in prayer before the virtual activity.

The activity was attended by indigenous students.

In commemoration of the International Day of Indigenous Peoples, URACCAN in its Bluefields campus held a virtual conversation under three important themes: Education and higher education from the Mission and Vision of this house of intercultural higher education, ancestral practices in the care of the environment and traditional medicine seen from the worldview of indigenous peoples.

The panel was formed with the participation of the MSc. Selvano Hodgson, coordinator of the Institute of Linguistic Promotion and Research and Cultural Rescue (IPILC), under his presentation of higher education of indigenous peoples and communities; MSc. Grace Kelly, coordinator of the Institute of Traditional Medicine and Community Development (IMTRADEC), with the theme of Health and Traditional Medicine in the context of COVID-19; In the same way participated the Ing. Mario Valerio, professor in the area of Science, Technology and Environment (CTMA), with the theme of Care and ancestral practices of the environment.

In this activity was attended by indigenous students, who through a cultural number performed songs in the Miskita language.

Faced with this, Teacher Antonia McCoy, coordinator of the Center for Multi-Ethnic Women's Studies and Information (CEIMM), said that "the celebration of indigenous peoples for this university is very important, because of the fact that its intercultural community philosophy, which focuses on making all peoples visible, on this occasion with the celebration of indigenous Peoples' Day , which is commemorated on August 9."

As for the topics addressed, MCcoy explains that "education since the university's action has been in cultural revitalization, among them precisely the Rama and Garífuna people in rescuing their native languages".

The MSc. Selvano continued to explain that "from the university interculturality is being promoted in higher education programs, which means the right to its cultural practices and the sharing of knowledge and doing among the community, taking up the gender perspective".

Traditional medicine and the environment from the worldview of indigenous peoples

With regard to intercultural health, the work carried out as a university in articulation with peoples in terms of traditional medicine in the context of the pandemic was highlighted.

In the same sense, the teacher stated that in the face of the crisis facing the world "today more than ever these practices of natural medicine have been resumed with the use of plants, boils, which has helped to mitigate the crisis a little."

"The themes are closely linked; on the environment side is closely related to traditional medicine, so emphasis was placed on contributing to these ancestral practices."

Engineer Valerio explained that "indigenous peoples also face crisis with forest loss, where all natural resources are provided, as well as medicinal plants that are ancestrally used by indigenous peoples."

The coordinator of CEIMM stated that the importance of addressing these issues with the student, taking as a departure that many belong to the different indigenous peoples of the region, allows to keep alive identities and cultures.