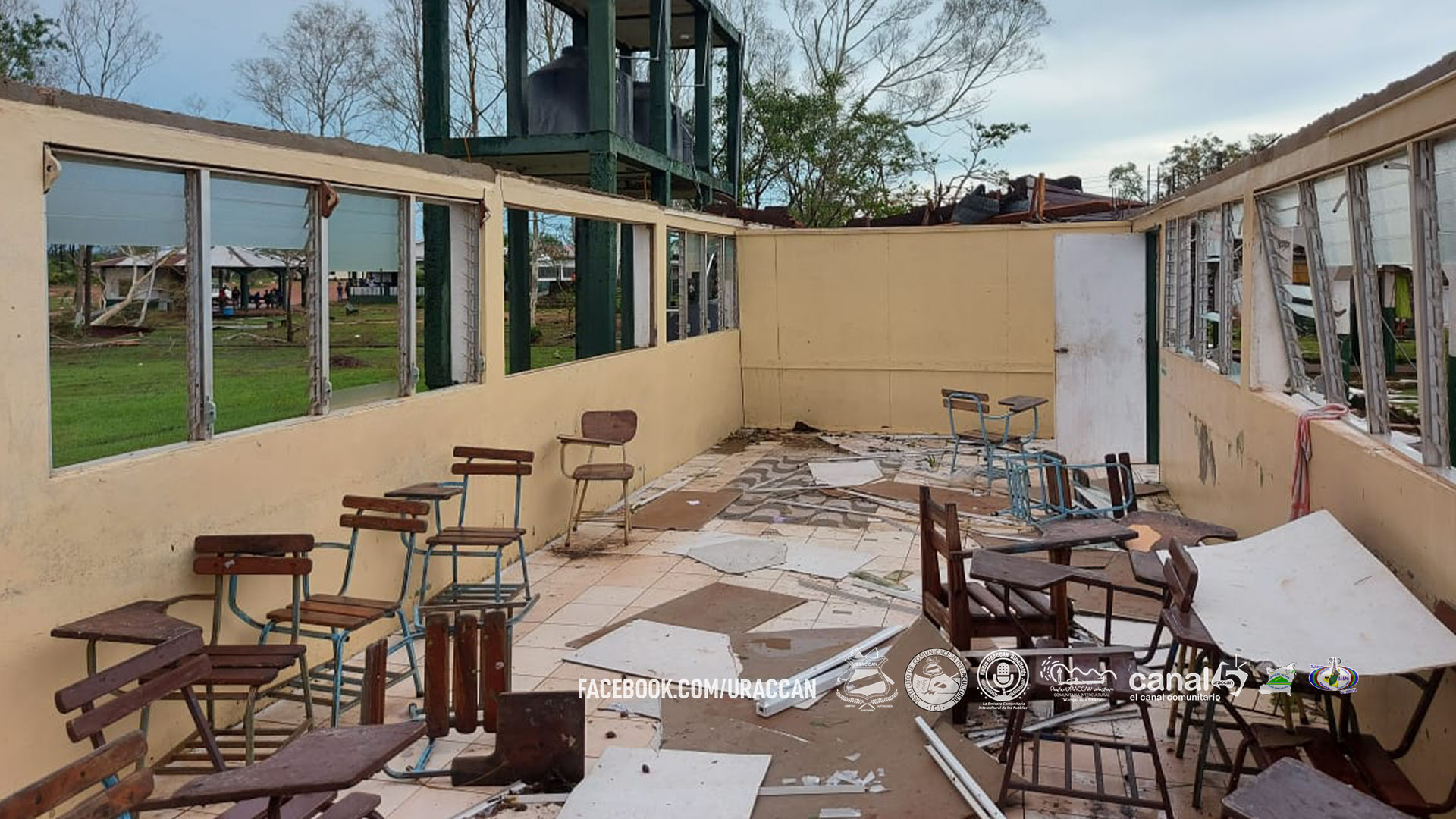 Rector of URACCAN: "Families will do their best to rebuild and restore our energies and spiritualities to advance our physical and mental healing."

Dr Hooker: "The Nicaraguan Caribbean, peoples and families are crying."

As if it were an ancient prophecy, where humanity is razed from the face of the earth, the North Caribbean Coast withstood the fury of nature. In less than two weeks, two powerful hurricanes (Eta and Iota) unleashed all their power against her. If calculating all the material damage seems impossible, the pain your people experience today is unimaginable.

The inhabitants of Bilwi and their communities had not even had time to lift what little they had left, they were still immersed as in a nightmare when they had another tragedy, more ferocious than the previous one, one that shook to the roots of the great trees, which made the earth tremble.

Where did our fish go? Where did our coconut trees stay? Where were our houses dragged? - people wondered, disoriented, feeling the dry pain squealing their throats.

URACCAN, through its Communication Laboratories, monitored these natural phenomena from before they reached the coast, alerting the population, preparing for the possible disaster. And aware of his relentless strength, he made his facilities available to Caribbean families, where they received shelter, food and strength, remaining in unity and prayer.

And having survived the onslaught of the first hurricane, when people were preparing to build whatever they could and URACCAN was counting damage to rebuild, news of another hurricane in formation and heading for the North Caribbean Coast ended up freezing their blood.

The inhabitants of Halover and WawaBar were evacuated to URACCAN. The Iota completely destroyed their communities. In Puerto Cabezas, Waspam, Rosita, Siuna, Bonanza, Prinzapolka, Waslala and Mulukukú, the panorama is bleak. The large trees, if not knocked down, were bent in the direction of the fierce winds. Downed, homeless walls abound. Even the metals gave way and ended up twisted.

Overflowing rivers, missing bridges, destroyed roads, impassable roads, lost coasts and rivers, incommunicado and without drinking water. These are some of the aftermath that in the last 13 days has left this second hurricane, as if it came exclusively to top off the cruel task started by the first against our people, said Dr. Alta Hooker, rector of URACCAN, in a special report issued this morning.

The Government of Nicaragua, in a preliminary assessment, estimates that "the damage caused by this natural disaster amounts to C$ 6,128 million córdobas, equivalent to US$ 178 million, representing 1.5% of GDP (Gross Domestic Product), excluding forest damage".

The Bilwi compound has been the most affected, in 100% of its infrastructure, as Dr. Armando Ugarte, coordinator of the Risk Commission of the National Council of Universities (UNC), stated in his damage assessment and needs analysis report. Everything was destroyed.

On the URACCAN campus in Siuna, all the trees are down, as if they had fallen into combat protecting that study center. Zinc sheets blew up like papers. The power cords are on the floor. Radio URACCAN Siuna, who at all times stood by the population, was incommunicado, with partial damage to its communication infrastructure.

Ⅴ. Pain from the ecosystem

For the people of the Caribbean Coast, the loss is not only about infrastructure, but also (and more significantly) ecosystems. In all this there is a "personal and collective heritage, for the damage to Mother Earth, the rivers and seas that provide us with what is necessary to live," Dr Hooker explained.

URACCAN, in all these hard and tragic moments has attested to its commitment and love for the peoples of the Caribbean Coast, for whom it is not only an educational institution, but a home to always go to and in which they will always find warmth and food.

Therefore, although "again the weeping of peoples becomes present, sadness is reflected in the eyes of women and men at the helplessness of seeing their homes and workplaces destroyed, as well as their natural habitats, already without trees to shelter from the rays of sun and rains (...), resilient spirit, empathy, solidarity , the complementarity of the peoples, families will make every effort to rebuild and restore our energies and spiritualities to advance our physical and mental healing," Dr Hooker optimistically concluded.