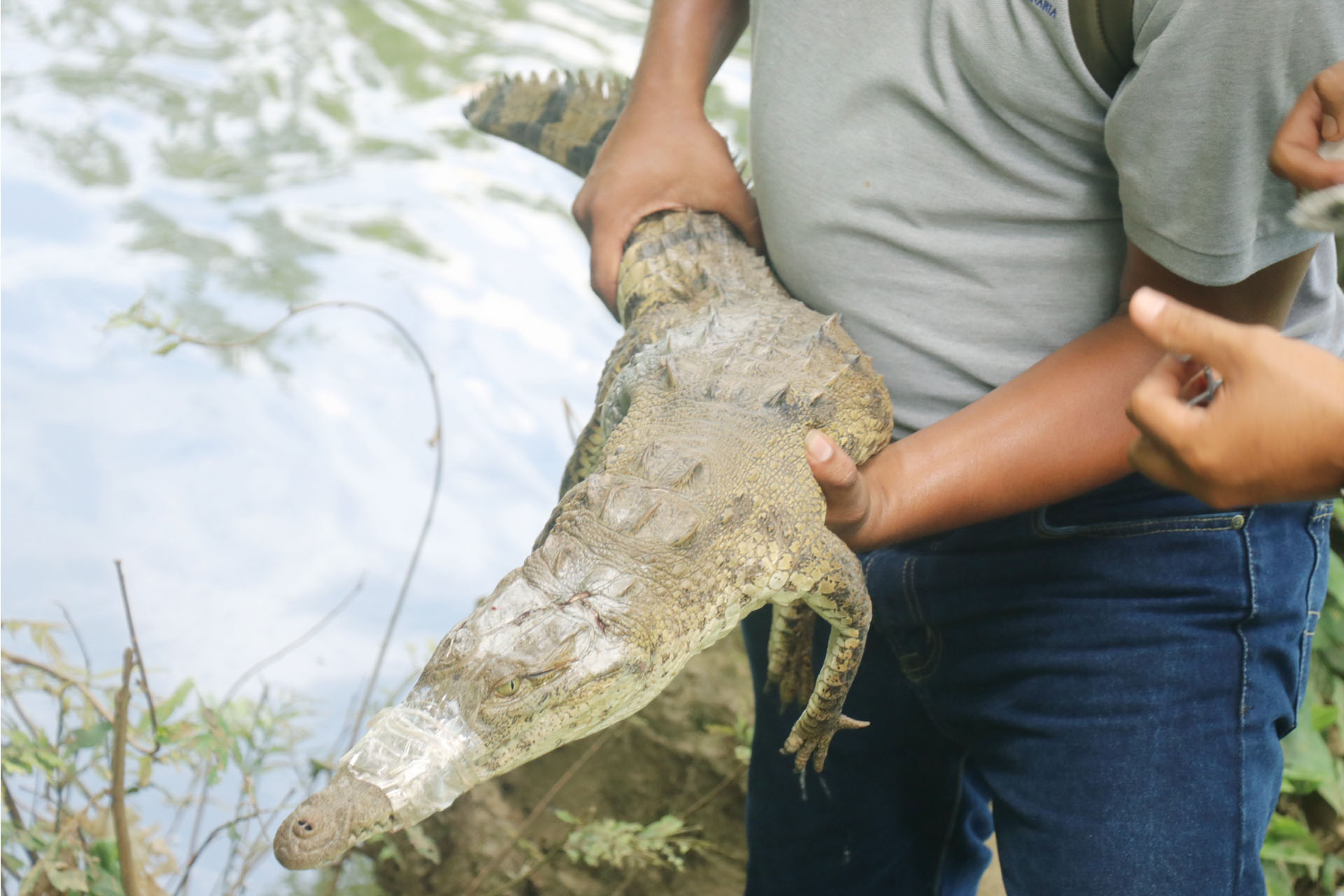 The scientific name of the quadripal is "cocodrilus alligator", a species endemic to the Caribbean Coast. Here, at the time before his release.

Actions reflecting the Institutional Mission and the commitment to biodiversity

Authorities of the Ministry of Environment and Natural Resources (Marena), in articulation with URACCAN Las Minas and the veterinary doctor Carlos Sánchez, of Siuna, released a quajipal that was machetized by settlers from the Pedro Joaquín Chamorro neighborhood. To save his life, the reptile had several operations and, after many cares, it was returned to its habitat.

Mr. Luis Herrera Siles, representing the venue, reported that these actions are part of the URACCAN Mission and of articulated efforts with the authorities working on the protection and conservation of the fauna and flora of the region.

Angelica Leonor Ruiz Calderón, Ph.D, vice-chancellor of Las Minas, said that he has been working articulately with marena, accompanying the processes that they are carrying out in the territory, as part of the philosophy of URACCAN responds to his commitment and responsibility to ensure the conservation and preservation of biodiversity.

Enrique Urbina, owner of Hacienda Altamira, where the little animal was released, said that it is an honor for him to house on his property this reptile, where he has eight lagoons where dozens of lizards and quadychpals are born every year.

The departmental inspector of Marena, ing. Norlan López, reported that the quajipal that was rescued six days ago, after villagers of the Pedro Joaquín Chamorro neighborhood called to report that the animal was with deep wounds caused by a white gun.

Carlos Sánchez, a veterinary physician, said that on Saturday he was called by Ing. Omar Soza, of marena, to suture the quajipal, applying eight stitches externally and internally from 10 to 15. He also reported that he applied antibiotics and painkillers, and was released because in captivity the quajipal did not want to eat.

The doctor noted that, when released, the quajipal presented no problems and will survive in its natural environment, given its adaptability and resistance. These animals, the vet exhorted, are not aggressive and pose no danger to the population, so nothing justifies harming them. It is always appropriate to call the authorities and be more aware of the importance of this species in our ecosystems.

URACCAN, from its Mission and Vision, establishes a commitment to watch over Mother Earth.